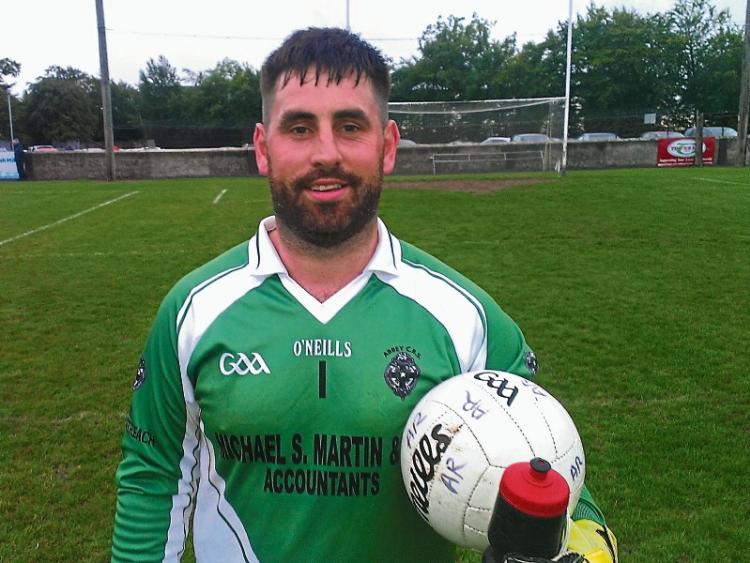 Arravale Rovers goalkeeper Timmy Dalton scored two penalties for his side in their 4-9 to 2-8 win over Upperchurch/Drombane at Dundrum this evening (Saturday).

At half-time in Dundrum on Saturday evening, it seemed Arravale Rovers might be on their way out of this year’s county senior football championship. Trailing by two points, already reduced to 14 men, and having scored just one point from open play in the first half hour, they looked to be in serious danger of exiting.

However, a second half transformation in which they improved greatly to score 3-8, including five excellent points from the left boot of Bryan Lowry, saw them ease home in the end. Once led, it seemed that Upperchurch/Drombane heads and hearts fell away somewhat with minds understandably on an important hurling championship game against Drom/Inch on Tuesday night.

While there may have been a lot to admire about the spirit of the second half fightback from the West Tipp outfit, there was little to suggest, on this performance at least, that they will be serious contenders to end their 33 year wait for a county title. But, nonetheless, they are still alive, and improve they will, but a repeat of a first half like this from here on it will definitely see them found out.

From the outset Upperchurch took the game to the hot-favourites and with a fast counter-attacking type game were deservedly 0-3 to 0-1 ahead after 12 minutes.

After Gavin Ryan had opened the scoring in the second minute for the Mid side, Arravale replied a minute late with a point from captain Mikey O’Dwyer. Amazingly this third minute point would be Arravale’s only score from open play for the entire first half.

A superb 45 metre effort from Paul Shanahan, was followed by another for Upperchurch from Matthew Greene as the Viv Downey coached side began to assert themselves. And right on the quarter-hour mark they strung together a move from defence between Jack Butler and Colm Stapleton to link up with Dean Carew coming through like a train. Taking on the ball 30 metres from goal Carew soloed through to blast past Timmy Dalton for a 1-3 to 0-1 lead and Arravale, for a moment at least, looked in serious trouble.

It’s often said in sport that a dangerous time to concede is immediately after scoring yourself. And so it was here, as straight from the kick-out, as if alerted to the gravity of the matter, Arravale worked their way through the middle to create a goal chance. But as Donough Leahy was about to pull the trigger, a footblock denied the former Tipp inter-county player at the expense of a penalty. Up stepped goalie Timmy Dalton to blast low to the right and the game was back to 1-3 to 1-1 after 17 minutes. It was vital that the Rovers responded quickly and to their credit, they did.

There would be no further scoring for the remaining 13 minutes in a disappointing first half. However on 24 minutes Arravale’s Paddy Dalton was yellow-carded and just two minutes later a second yellow for an over-robust midriff tackle leaving Derek O’Mahoney with no option but to send him to the line. Dalton couldn’t have any complaints, and didn’t. Without his influence, it left Arravale with a mountain to climb with an entire second half still to come.

Truth be told, Arravale were fortunate to be just two adrift at the interval. Owning the vast majority of possession Upperchurch kicked six bad first half wides and a ton of wasted ball into a backline where Tommy Lowry, Ciarán Lowry and Pearse Richardson mopped up well.

Arravale, sporting Abbey CBS jerseys due to a colour clash, learned whatever lessons Tadhg Duggan and Conor Counihan taught them at half-time, as within three minutes of the re-start it was all square at 1-3 apiece following points from captain Mikey O’Dwyer and Bryan Lowry.

A softish enough free for Upperchurch was planted by Paul Shanahan – the only pointed free of the night – but still the tide was turning for Arravale Rovers it seemed.

Bryan Lowry’s second point after a break from defence from the dynamic Tommy Lowry restored parity before the Rovers brought on Niall Donovan in the 40th minute and his introduction was catalystic as the Tipp Town side seemed to up a gear thereafter.

A Brian Jones effort from 40 metres edged Arravale Rovers in front for the very first time in the 42nd minute before Colm Stapleton, following an excellent pass from county hurler James Barry, tied it up for the final time at 1-5 each a minute later.

Another probing Arravale Rovers move was then worked into Niall Donovan and as he went to shoot, once again a footblock denied his effort. Again Derek O’Mahoney had no hesitation to point to the spot and once more the ever-cool Timmy Dalton made the long trek upfield to blast low to the net. It was the moment when Arravale Rovers grabbed the game by the scruff of the neck and made it theirs.

If the final quarter of the opening half produced no real action, the last 15 minutes of the game saw a feast of flags.

Up and down the field both sides went at it with some excellent scoring in a 10 minute spell at which stage Arravale led 2-9 to 1-8 with just five minutes remaining.

A Jack Butler effort from the outside of the boot for the Midmen was cancelled by another trademark left legged strike by Bryan Lowry from a very tight angle.

A jinxing effort from Colm Stapleton narrowed it to two points once more before Rovers responded with a delightful point finished by Niall Donovan after Donagh Leahy and Darren Lowry were heavily involved.

James Barry sent John Ryan through to point for ‘The Church’ as they desperately tried to narrow the gap, but once more, Bryan Lowry, this time from a sideline ball split the posts perfectly, and the same player had his fifth of the second half three minutes later after good work by Mikey O’Dwyer.

The last three minutes of the game, somewhat bizarrely, gave us three goals.

Firstly, Stephen Quinn, not long on for Rovers, finished a fine move low to the corner as Upperchurch began to commit too much to the chase.

A minute later the Upperchurch defence were caught adrift again when Cian Ryan set up Donough Leahy for his deserved goal.

And in the final minute came the third penalty of the night, for the same footblock infringement, this time on Upperchurch's Pat Shortt. It gave Paul Shanahan the opportunity to blast low past Timmy Dalton to complete the scoring at 4-9 to 2-8.

Arravale Rovers will be left with a lot to ponder after this puzzling performance. They were off the pace in the first half and only seemed to awaken at the interval.

They can take heart though from a fighting spiriti and some honest performances.

In defence Tommy Lowry put in a fine hour ably assisted by some great cover work from Pearse Richardson and Ciarán Lowry.

Donough Leahy and Brian Jones had better second halves around the middle but it was the forwards who redeemed themselves the best, scoring 3-8 and keeping the wide count at just four for the whole hour. Bryan Lowry’s handful of points when needed were all excellent efforts and Mikey O’Dwyer worked hard right throughout scoring two of his own. Niall Donovan’s introduction, even if he was strapped heavily, played a significant role also in wrestling the initiative from their opponents.

Upperchurch/Drombane will be disappointed for sure. The chance was there to make make hay in the first half and they didn’t. Six first half wides and nine in total were costly and they should have gone to the break more than two points to the good for all their possession.

But credit where credit is due, the traditional hurling club despite having a huge game within 96 hours, came with their strongest team and “had a right go at it”. It is an attitude that others clubs throughout the county could endeavour to emulate in this year of disheartening  and self-serving walk-overs.

They had some notable performances on the night from the likes of Paul Shanahan, Jack Butler, Ger Grant, Dean Carew, Diarmuid Grant, Conor Fahy, Gavin Ryan and Colm Stapleton. And they kept at it to the very end even when it was gone beyond them. Credit to all concerned.