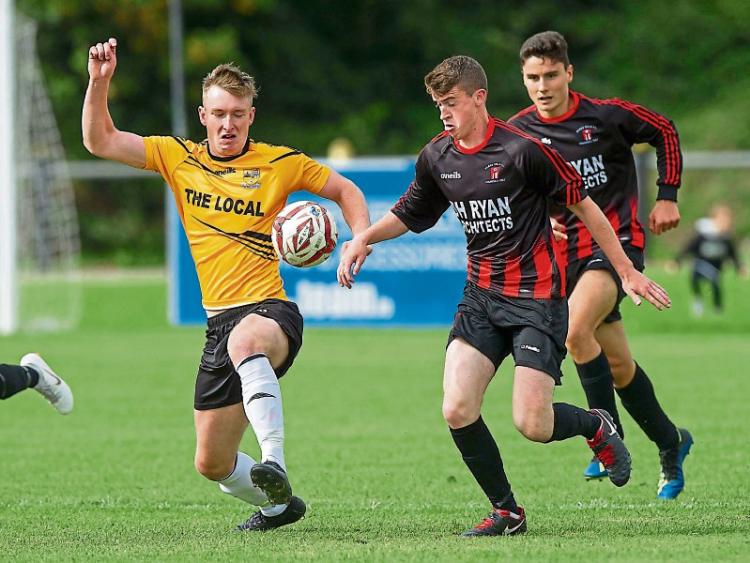 Michael Wade (Peake Villa) attempts to get past Conor O’Sullivan (Clonmel Town) when the sides clashed in the Premier League at the Dr. Pat O’Callaghan Complex, Cashel Road, Clonmel on Sunday last.

Burncourt Celtic got their first win of the new season when they ran out comfortable winners in the end against a Ballyneale side that are now rooted to the bottom of the Second Division table after the first three rounds of games.

Darren O’Dwyer had the home side ahead after only seven minutes when he finished off some good play, but straight from the resultant kick off the visitors hit back with a penalty which was converted by Damien McCarthy.

Two goals in a four minute spell from O’Dwyer again and Niall Halley, were enough however to give Celtic a three goal to one lead at the break. Damien Mc Carthy hit second goal ten minutes into the second half to reduce the lead to only one goal again, but Dion Morrissey scored the home side’s fourth to open the lead back up again fifteen minutes from time.

A fifth goal right on the stroke of the full time whistle ensured there would be no comeback late on.

All the goalscoring action in this game took place in the first half as these two sides played out an entertaining two all draw in Donohill on Sunday.

The game started at a high tempo and there were a number of chances on both sides before Conor Hennebry headed home a corner kick to open the scoring in the 15th minute.

Eleven minutes later the teams were back at parity when the home side were awarded a penalty kick and Dinny Crosse stepped up to slot the ball home. This seemed to rock the visitors and they were caught out again only four minutes later when some excellent play the hosts found Fionn Hogan unmarked at the edge of the Galbally area and he made no mistake with his effort.

But just as they were about to take this lead to the break, Galbally’s Patrick Murphy hit an absolute screamer from thirty yards to the net to go for the tea level, and leave the supporters breathless.

Unfortunately the second half never hit the heights of the first and there were no more goals, but overall this was a very entertaining game for those who watched it.

Cashel Town continued their 100% start to the season on Sunday, and had Kilmanahan beaten before they had even warmed up, as the home side continue their charge to rectify their double relegation over the past two seasons.

The scoring was opened when Brendan Ryan fired in a 20 yard effort after only two minutes, and while Kilmanahan were getting over the shock of going behind to early they were to concede an almost identical second goal three minutes later, this time with Niall O’Brien scoring.

The game settled afterwards and both sides had half chances before Cashel added two more just after the hour mark, with a brace of goals scored by Eoin Byrne. The scoring was rounded off in the final minutes by veteral Ian Hahessy who is enjoying a fine year in goalscoring terms for the home side.