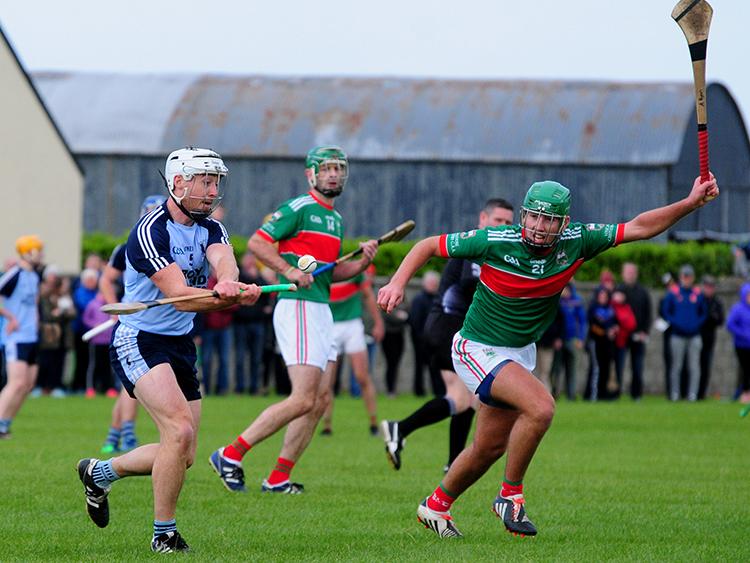 An over-taxed Loughmore-Castleiney side saw their hopes of a county senior hurling title go up in smoke at Dolla on Sunday when they had to give best to a highly-motivated Nenagh Éire Óg in an entertaining Tipperary Water County Senior Hurling Championship quarter-final.

Five points separated the sides at the finish and it was a fair reflection of Nenagh’s superiority on the day as a Loughmore-Castleiney combination, which has been through a huge programme of games in recent weeks in both hurling and football, could not find the spark nor the energy to overcome rivals who were keen on making amends for a sub-standard North semi-final showing.

Once Philip Hickey netted for Nenagh after five minutes to put them 1-2 to 0-3 ahead they were never subsequently led and for extensive periods controlled the game in the style of a side thinking of championship success. Their second goal, taken at the second attempt by Tommy Heffernan in the fifteenth minute, gave them a 2-4 to 0-4 advantage and presented Loughmore with the proverbial hill to climb for the remainder of the hour.

Climbing seemingly insurmountable hills has been Loughmore’s stock in trade for many years now so nobody was getting carried away as the game reached the half-way stage with Nenagh now seven points to the good (2-9 to 0-8).

Loughmore’s cause was not helped when John McGrath’s penalty in the 25th minute (after Liam Treacy was grounded) was comfortably saved by Nenagh goalie Shane Hennessy.

Jake Morris was the biggest thorn in Loughmore’s side during that period, but the excellence of their defence, with Dáire Quinn and Hugh Maloney foremost in their rearguard, and the fine work of Paddy Murphy and Mikey Heffernan was also a significant factor.

John Meagher was again an inspiring figure for Loughmore in defence with Brian McGrath, John Ryan, Ciarán Connolly and Noel McGrath working their socks off.

A big push from Loughmore was expected in the second half, but Nenagh were not for rolling over and at the three-quarter stage they were eight points ahead (2-14 to 0-12).

The surge from the Mid men did come and in six minutes they hit four points - Ciarán Connolly, Tomas McGrath and John McGrath (two) - to create anxiety among the Nenagh supporters. Jake Morris’ point gave them some respite, but efforts from John and Noel McGrath left Loughmore trailing by a goal with five minutes to play.

Now Nenagh’s mettle was being put to the test and how well they responded. Killian Gleeson shot a great point to protect the goal lead, but in the 61st minute they had Conor McCarthy to thank for charging down an Aidan McGrath shot that seemed destined for the Nenagh net. Had Loughmore goaled then anything might have happened, but, instead, it was Nenagh who powered up the field to where Jake Morris, the man of the match for Éire Óg, fired over his ninth point and sealed the victory.

This was a huge win for Nenagh Éire Óg and one badly needed after the North semi-final performance and one which should boost morale significantly as they face into holders Thurles Sarsfields in the semi-finals.

Taking Loughmore’s scalp is a considerable achievement at any time, but all the more uplifting now that the serious hurling is underway. The challenge for them is to build on this performance and they will hardly find opposition more likely to fire them up for the supreme effort than the champions of the past four years.

In Jake Morris they had the most influential player on the field. The All-Ireland winning under-21 star seems destined for a bright future. He did not want for capable accomplices with Dáire Quinn, Conor McCarthy, Hugh Maloney, Michael Heffernan, Barry Heffernan and Paddy Murphy all putting their shoulder to the wheel to the maximum effect.

Loughmore went into the game on the back of a hard-fought preliminary quarter-final against Killenaule the previous Tuesday evening and a county football quarter-final the Friday before that.

County star John McGrath was carrying an injury and Aidan McGrath could not start because of injury. It was expecting a lot of these lads to again rise to the occasion, but they contributed hugely to making this a fine contest and one can only speculate what might have happened if everyone was fully fit and had they enjoyed a less-taxing programme of games in the build-up to this encounter.