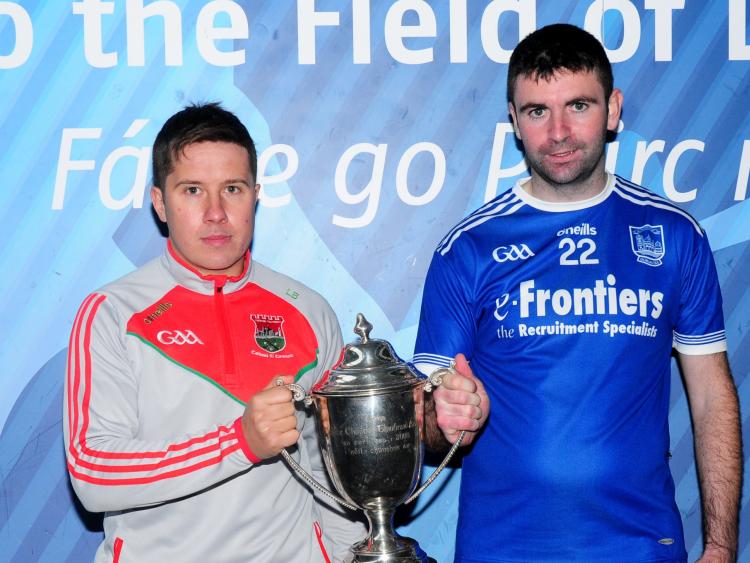 Holycross will host an attractive Tipperary Water County Intermediate Hurling Championship final on Sunday, October 14th when a reinvigorated Cashel King Cormacs team take on perennial contenders Thurles Sarsfields (3.30pm). Incidentally, the Tipperary Water County Senior Football Championship semi-final clash between Loughmore-Castleiney and Ardfinnan will serve as an appetising curtain-raiser to the intermediate hurling decider (throw-in 2pm). But it is the battle to land the Jacksie Ryan Cup which really focuses the mind this weekend. And, it was thrilling to note this week that the Cashel club are facing into the final in confident mood.

“The fact that we are back senior is great, but we want to go back senior as county champions next weekend,” Cashel King Cormacs secretary Aodan Wrenn told the Tipperary Star.

“We want to win the county final next weekend and make a statement that we are going up to senior hurling and to challenge for senior honours as county intermediate champions - that’s our goal. We have achieved the senior status, great, but we want to go up now as champions and that’s what we intend to do next weekend.”

Both of the intermediate finalists are promoted to Roinn II of the Tipperary Water County Senior Hurling Championship in time for the 2019 season, but Sunday's final still means the world to both sides.

“We beat Sarsfields in the group stages this year in the championship, but that means absolutely nothing next weekend,” Aodan Wrenn added.

“The slate has been wiped completely clean. Their pick, their tradition and everything about them has to make them a huge challenge for us and it has to make them favourites, but we are going in confident as well. We lost the divisional final (to Sean Treacy's), but re-grouped and we won four huge matches in succession. We are getting better and better and better. Our backs are playing the hurling of their lives, our midfield is absolutely flying it and our forwards are playing with great style and great skill. We are not getting ahead of ourselves. We know how hard it is going to be; we know that Sarsfields are going to be a massive, massive challenge, but we are ready for it and we are looking forward to it,” Aodan Wrenn said.

Cashel King Cormacs secured their place in the senior ranks for the first time since 2014 when the side coached by Conor Gleeson (Boherlahan-Dualla) saw off the challenge of Borrisokane with thirteen points to spare (3-15 to 1-8) in the semi-finals at Dolla.

This Cashel King Cormacs team is managed by Ronan O’Donoghue - Brendan Bonnar and David Enright are the selectors while Alan O’Connor (Cahir) is a key influence on the team (strength and conditioning coach).

During their campaign King Cormacs initially drew with Carrick Davins (1-17 each), but recovered to beat Cappawhite (1-21 to 1-17) and, most notably, Thurles Sarsfields (1-15 to 0-14) in the county championship. That result propelled Cashel into the quarter-finals where they proved too strong for Ballinahinch after extra-time (2-22 to 1-22).

Meanwhile Lee Burke insisted that the “buzz” is building in Cashel town ahead of the final.

“For years we were down and we were down for long enough. We had our doubters too and it is great to come through on the other side of it,” Lee Burke explained.

“At the start of the year we set our goals, but I don’t know if we expected to get this far. It’s a building process and game after game the momentum has been building nicely in Cashel; that buzz is around the place and it’s great.”

Lee Burke highlighted the influence of club chairman TJ Connolly while he also admitted that there was a huge sense of relief associated with their semi-final win over Borrisokane - Cashel celebrated at the final whistle at Dolla heartily and who could blame them.

“That was a big relief,” Lee Burke admitted.

“If we were going into the county final on Sunday and still trying to go up senior it would be another added weight on the shoulders. So, now we can just go, attack the game and enjoy it.” Thurles Sarsfields proved too strong for Shannon Rovers (1-17 to 0-12) in their respective semi-final at Borrisoleigh. And, it is obvious that manager Andy Ryan desperately wants to see his panel of players succeed.

“These are a great bunch of lads,” Andy Ryan said.

“These lads, and I don’t like using the word, have been in the shadow of the senior players, but they have been working just as hard throughout the year and for all of the years gone by. If any team ever deserved to have a go at this they do. They have done everything that has been asked of them and, hopefully, next Sunday we can do it. I would love to see this bunch (of players) get the reward that they deserve,” Andy Ryan added.

Andy Ryan is joined on the Blues’ intermediate management team by coach Tony O’Mara - who works alongside selectors Séamus Quinn and Eoin Kelly (Mullinahone) - while strength and conditioning coach Dave Moriarty (Limerick) has had a huge impact on the squad this season.

Andy Ryan, of course, knows all too well that Thurles Sarsfields face a huge obstacle in Sunday's intermediate hurling final - Cashel King Cormacs are a terrific side.

“Yes, of course they are,” admitted Andy Ryan.

In the preliminary quarter-finals Sars proved marginally too good for Moyne-Templetuohy (1-18 to 1-16) while they enjoyed a thirteen-point win over Golden-Kilfeacle in the last eight (2-19 to 0-12). On Sunday Cashel King Cormacs are making the storied club's first appearance in the county intermediate hurling final while Thurles Sarsfields will be appearing in a fifth decider; their fourth in five seasons.

“It’s great to be back (in the final),” Thurles Sarsfields captain Aidan Ryan said with a smile.

“Last year was the first year that we didn’t get to the final out of the last five and we were gutted. But we set our stall out at the start of this year, the lads are training hard and we have a great bunch there. Hopefully we can go one step further, but we are under no allusions that we have it all to do against this Cashel team next weekend.

“Cashel have a big town there and they have great hurlers. They are a serious team, but, look, we think we are fairly good ourselves so we will just prepare during the week as we always do and, hopefully, we might get our bit of luck this time and go all the way,” Aidan Ryan said.