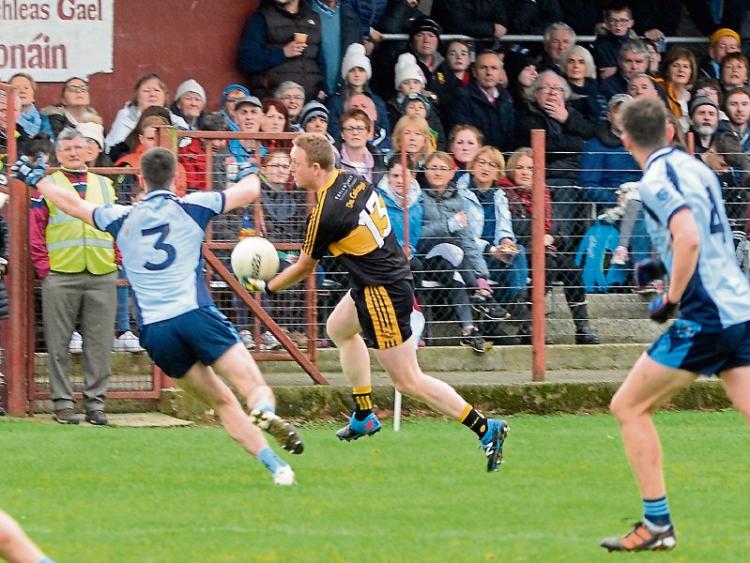 Newly-crowned Tipperary senior football champions Moyle Rovers crashed out of the Munster Club Championship when they were outclassed by Dr Crokes of Killarney at Ardfinnan this afternoon.

While the defeat was not unexpected, the manner of the 16 points trouncing at the hands of the Kerry kingpins will be a huge disappointment to the Monroe club. They always knew that they had a mountain to climb against a club who have just put together three county titles in ‘The Kingdom’ but a litany of errors and some serious ill-discipline added to Rovers already mammoth task.

And yet in patches today, against the 2016 All-Ireland club champions, they produced some excellent football and gave as good as they got. However, two softly conceded first half goals, a cheaply conceded black card after 20 minutes and and a nonsensical red card nine minutes into the second half tore the heart and soul out of their challenge.

The defeat is one thing, but not getting out your best performance out on the day will be a bigger letdown for the Powerstown/Lisronagh club. If they take on board all the lessons from today’s chastening defeat, the football and the other stuff, it will be a lesson well learned.

Poor starts have been haunting them all year long, but today they opened well and were only 0-3 to 0-2 down after 11 minutes when disaster struck in the form of Crokes’ first goal. A kick-out that was won by Rovers was recycled backwards and across goal when a fumble by Paddy Morrissey saw Tony Brosnan take possession and his simple pass across the goalmouth was palmed home by Crokes full-forward Kieran O’Leary.

Having opened with three frees, the Crokes suddenly found their kicking boots and further points from Daithi Casey and Micheál Burns had them 1-5 to 0-3 up when Rovers lost their star forward Liam Boland for a needless retaliatory push on Crokes captain John Payne after 19 minutes. Suddenly the mountain was even steeper.

It was Boland who had kicked Rovers’ first point of the game after three minutes and two further points from the inspirational Richie Power were keeping the Tipp champions in the hunt but heads went down after Boland’s unnecessary black card.

By the 23rd minute the Kerry champions were seven clear after further points from the lively Burns and David Shaw, but Rovers struck back with two of their own inside a minute, both from centre-forward Dara Ryan who put in another superb showing.

The second Kerry goal was again poorly conceded. An effort at a point by Johnny Buckley came in low and between defender and keeper Moyle Rovers failed to deal with it and Kieran O’Leary touched home his second goal to finish the game off as a contest. The same player added a point a minute later as the sides when to the break at 2-8 to 0-5 in favour of Pat O’Shea’s side.

More bad fortune awaited Rovers on the resumption when an opening minute move saw them carve open the Crokes defence only for Stephen Quirke’s goalbound shot come back off Diarmuid Foley with the Kerry keeper beaten. Luck too it seemed had deserted the Tipperary champions.

Tony Brosnan’s fourth free of the afternoon opened the second half scoring before Rovers were reduced to 14 men in the 39th minute. A good move saw Shane Foley bursting through the Crokes defence but after his lost possession in falling the referee adjudged his had struck out at a player while on the ground and brandished red. Carrauntoohil now seemed small compared to the mountain Rovers had in front of them.

A Kieran O’Leary point stretched the lead to 11 points as both sides began to ring the changes for different reasons, and it was one of Moyle Rovers substitutes Sean Carey who kicked their first point of the second half 16 minutes after the re-start.

Indeed the whole of the second period would produce just three scores for Moyle Rovers, the others coming from Riain Quigley and a late effort from 45 metres from the hard-working Ross Mulcahy.

Dr Crokes tagged on their third goal in the 57th minute when the pace of Tony Brosnan took him in around the Rovers flanks and he unselfishly presented substitute Michael Potts with another palmed effort past a helpless Ciarán Kenrick.

The referee’s final whistle was merciful to Moyle Rovers. The Tipperary champions, no doubt, have serious potential to develop as a side capable of challenging for lots of silverware into the future, but they still have a lot to learn and if they start today, with the inflicted and self-inflicted, it may yet prove to be a day they will look back on in a more benign light than the scoreline of 3-15 to 0-8 immediately suggests.