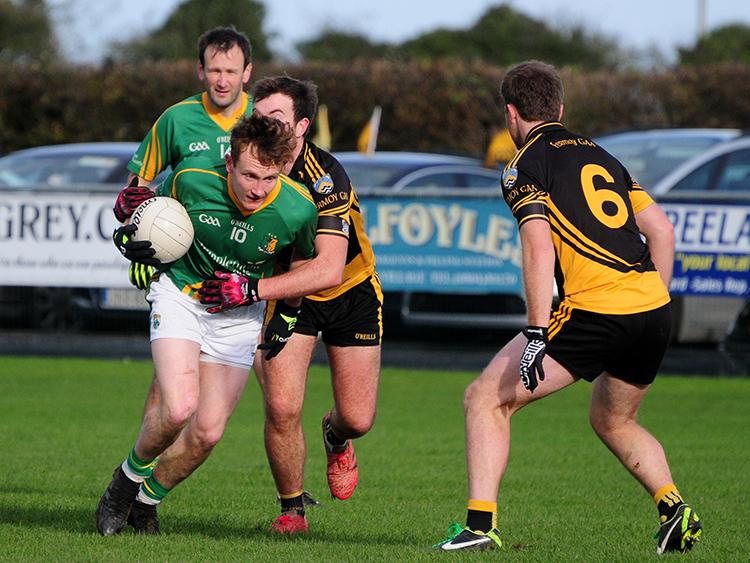 Moyne-Templetuohy had three players red-carded in a frantic four minutes at the end of this AIB Munster Intermediate Club Football Championship semi-final played at Templetuohy on Sunday last Fermoy, the Cork champions, held on for a four-point win.

It was an extraordinary climax to a fine contest played in a competitive which was played in a sporting manner, but the sendings off tending to dominate the post-match discussions and over-shadowed Moyne-Templetuohy’s gallant second half rally. The Tipperary champions cut a nine-point half-time deficit to four with two minutes to play in normal time with an under-pressure Fermoy crying out for the final whistle.

Waterford referee Alan Kissane’s decisions really made no difference to the outcome as time was against the Moyne-Templetuohy surge, but the incidents were out of keeping with a keenly-fought encounter which was ultimately decided by a fortuitous second Fermoy goal six minutes before the break when hesitancy in the home defence presented Martin Brennan with the opportunity to blast home and he duly obliged.

It was a disappointing end to the campaign for Moyne-Templetuohy with the real damage done in an eight-minute spell before half-time when the visitors hit 1-3 without reply to put themselves in a seemingly unassailable position with an interval lead of 2-6 to 0-3.

It was a scoreline which did a great injustice to the Moyne-Templetuohy effort in the first half. In play they had given as good as they got, but Fermoy’s ability to hit them on the counter-attack was the Cork side’s trump card. Indeed, three of the Fermoy scores in the period came from counter-attacks when Moyne efforts for scores fell short.

With the fresh breeze behind them Fermoy got the ideal start when in the sixth minute Shane Aherne netted - he finished off a well-executed forward move after John Hassett’s attempt for a Moyne score fell short into the breeze.

Fermoy built from the back, luring the Moyne men on to them and then breaking at pace.

Moyne had plenty of the ball and John Hassett scored their first point in the ninth minute after Alan O’Connor had earlier pointed a Fermoy free.

After twenty-three minutes it was 1-3 to 0-3 with Tom Meade and Conor Bowe adding further Moyne points in a lively encounter, but from here to the break Fermoy enjoyed a distinct spell of supremacy which was kick-started in the 24th minute by Martin Brennan’s goal - an opportunist effort from a situation that a hesitant Moyne defence should have dealt with. A minute later goalkeeper Liam Coleman pointed a free and before the break Kieran Morrison added two further points for a 2-6 to 0-3 lead at the interval.

Moyne-Templetuohy were in trouble and it was a serious test of their character as to how they would respond, but just as they did in the county final win over Golden-Kilfeacle when the questions were asked they had the answers.

Points by Conor Bowe and Tom Meade at the start of the second half set the tone, but a goal was needed. Conor Bowe’s blast for a goal in the 42nd minute was deflected out for a forty-five, but Moyne kept pushing forward and Diarmuid Leahy pointed a minute later.

Another from John Hassett in the 48th minute had the deficit down to five with Fermoy still to register a score in the half.

Fermoy circled the wagons and for the next ten minutes worked to deny Moyne the goal they needed to save the game.

John Hassett pointed a free for the Tipp lads in the 58th minute - there was still time to rescue it.

Moyne were throwing everything into attack and lost Niall Russell to a second yellow card for a late tackle in the 59th minute. Tomás Hamill followed him to the line a minute later and with the game now beyond them Moyne had their third casualty in Martin Kelly in the 62nd minute.

It was a disappointing finish to a great year for the Moyne lads, but they have the considerable consolation of the county title and a return to senior ranks next year as reward for their efforts.

Fermoy came with a big reputation, but overall there was little between the sides in terms of quality with Fermoy’s greater incisiveness with the ball ultimately deciding the tie.

Moyne-Templetuohy manager Phil Bowe and his back room team could not have asked for more from their charges with players like Diarmuid Leahy, Tomás Hamill, Diarmuid Fogarty, Tom Meade and Jason Bergin working their socks off.

The loss of injured centre-back Pearse Meade was a big blow facing into such an important game.

Well done to Fermoy who came, saw, and conquered despite failing to score in the second half. They had excellent players in Peter Murphy, Kieran Morrison, Darragh O’Carroll, Martin Brennan and Shane Aherne.