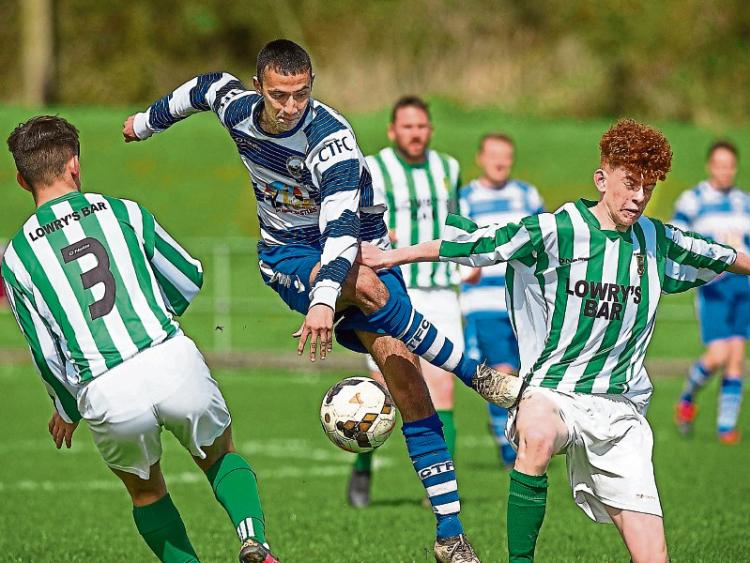 James Harding seen here in action against St. Michael's scored a hat-trick on Sunday last for Cashel Town against Suirside.

It was bottom against top when Cashel Town made the trip to Suirside on Sunday and the gulf in the points was shown up on the field as the visitors cemented their promotion credentials with another good win.

In charge from the start Cashel Town were making all the running and eventually opened the scoring midway through the first half when the ever dangerous James Harding glided past the home defence to score.

Harding was a thorn in the Suirside back line all day and doubled the advantage five minutes into the second half with another cool finish.

And Harding finally got the third goal that his general work deserved ten minutes from the end when he wrapped up his hat trick and all three points for his side.

Clonmel Town’s seconds are having an excellent season in this year’s Division Two, and remained at the top of the division with a well-deserved four goal win away to a Donohill and District side who never make it easy on their opponents.

The visitors were quickest out of the blocks in this game and went quickly into a two goal lead courtesy of strikes by veteran goalscorers Ian Cleary and John Shanahan.

Clonmel Town  they were rocked back on their heels when the home side barrelled back into the game with two quick goals before the break to level the tie.

The visitors regrouped at the break and the   second half the game belonged to the them scoring four without reply.

Shanahan with his second and another from Gino Lonergan  re-established their two goal cushion prior to the hour mark as they put the West Tippeary defence under a lot of pressure in this period.

Two late goals from the much-travelled Ian Cleary  second and another from  Harry O’Connor put a gloss on the result that was perhaps a tad unfair on the hosts, but Town will be very happy with the performance.

See more sport on TipperaryLive.ie Who is winning on the golf courses of County Tipperary?