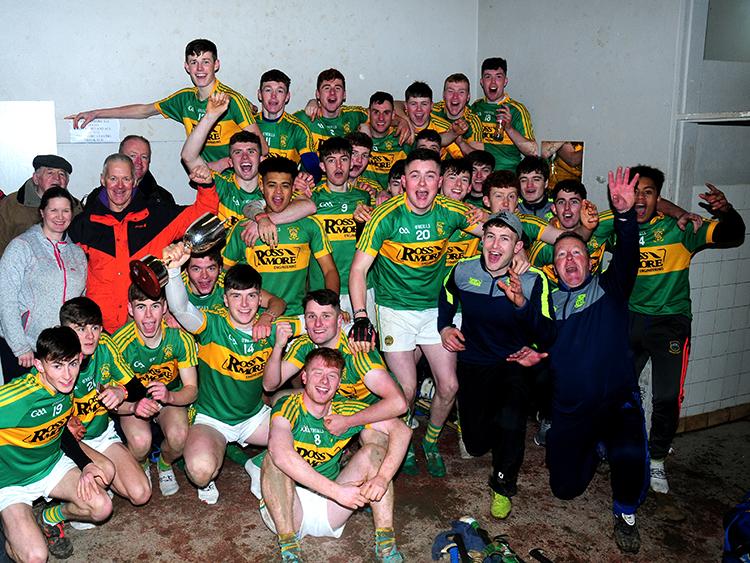 What a year it has been for Clonoulty-Rossmore! A few weeks back they won the county senior hurling championship title and now, with Christmas just around the corner, they brought the curtain down on a memorable year in the best possible fashion by adding the Tipperary Water County Under-21A Hurling Championship title when lowering the colours of Thurles Sarsfields in a thriller at Boherlahan on Sunday last.

It was an epic performance from the West Tipperary champions who were winning the title for the first time and who overcame the enormous setback of having inter-county panellist Dillon Quirke ruled out through illness though he did make a brief appearance during stoppage time.

A goal at either side of the half-time whistle tipped the scales in Clonoulty-Rossmore’s favour in what was a marvellous contest which delighted the bumper attendance.

It could well be argued that Quirke’s absence inspired his team mates because they certainly hurled out of their skins to achieve a goal which has eluded them many times before now.

And, from a club perspective the future now looks extremely bright as Clonoulty-Rossmore savour the prospect of a rich crop of young players coming on stream to supplement their senior contingent and challenge them for places in the first fifteen.

Sarsfields, however, did not go down without a mighty fight and in the closing minutes they were camped in the Clonoulty-Rossmore half of the pitch as they sought the levelling goal, but a Mathew Kelly effort, which looked bound for the net, was beaten away and a subsequent free by the Thurles lads was well off course, much to the relief of the West champions.

On a heavy pitch, Sarsfields looked the better outfit in a first half in which scores were at a premium. They went three clear inside twelve minutes thanks to Conor Stakelum (two) and Bill Darcy before Cathal Bourke’s two frees got Clonoulty-Rossmore moving.

The exchanges were physical and testing, but three further Sarsfields points from Jack Lanigan, Eoin Purcell and Stakelum had Sarsfields 0-6 to 0-2 ahead after twenty minutes.

Two further Bourke frees kept Clonoulty-Rossmore in touch, but a Conor Stakelum point in the 30th minute gave Sarsfields a 0-7 to 0-4 advantage. And, things were looking good for The Blues.

Clonoulty-Rossmore full-forward Aidan Carroll was fouled in injury time and Cathal Bourke belted the resultant penalty to the net. He followed up immediately with a point to put Clonoulty-Rossmore ahead for the first time, but, in the 35th minute Cathal Moloney levelled for Sarsfields (0-8 to 1-5) and that’s how it stood at the break. 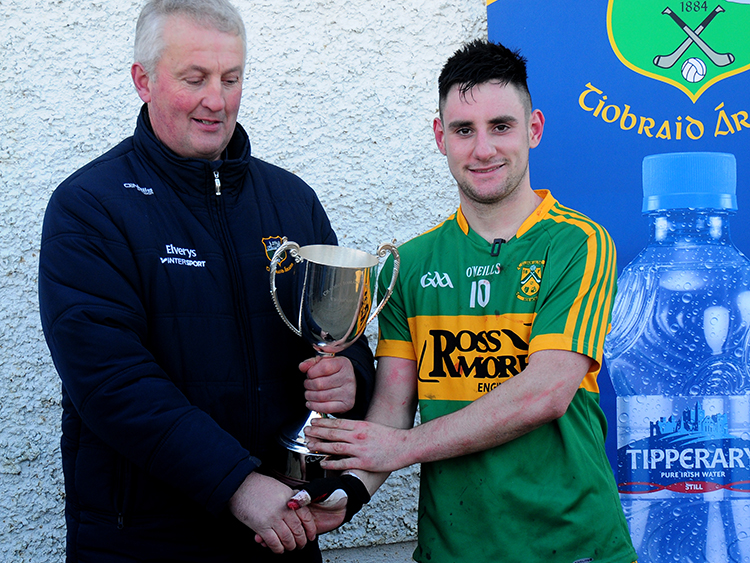 STRAIGHT DOWN TO BUSINESS

Clonoulty-Rossmore’s strong finish to the half redeemed a below par earlier performance and they got straight down to business after the resumption with a Nathan Slattery goal after two minutes which was followed shortly afterwards by a Michael Ryan free for a 2-6 to 0-8 lead.

Now questions were asked of Sarsfields and they responded. After Jack Lanigan pointed Conor Stakelum netted for them following a Michael Purcell free to level after thirty-eight minutes.

The momentum now was with Thurles - points from Cathal Moloney and Michael Purcell put them two clear by the 41st minute.

Two points adrift, the last quarter saw Clonoulty-Rossmore raise the tempo of their game. A brace of Cathal Bourke points from frees levelled matters by the 52nd minute and he drove them ahead with three further points (two from frees) - the West champions were three ahead as the game drifted towards the hour mark.

Sarsfields threw everything into attack in search of a levelling goal with full-back Jack Derby now lending his height up front. But it was not to be and despite intense pressure with frees dropping into the goal area referee Philip Kelly’s final whistle signalled an invasion of the pitch by delighted Clonoulty-Rossmore supporters.

It was a superb performance by the Clonoulty-Rossmore lads who showed terrific spirit and commitment to achieve their goal. They did not let Dillon Quirke’s absence undermine them and in centre-back Enda Heffernan they had a mighty presence who dominated his area with a majestic performance. He was not alone as Aidan Loughman, Jimmy Ryan, Michael Ryan, Nathan Slattery and the very accurate Cathal Bourke all made huge contributions to the victory.

Though defeat was their lot Sarsfields did themselves proud. They too were bidding for a second county title this year (to add to the intermediate crown won some weeks back) and when they reflect on this performance they will acknowledge that they paid dearly for some unforced errors and a couple of missed goal chances.

In Michael Purcell they too had a towering centre-back with Jack Derby, Cathal Moloney, Eoin Purcell, Jack Lanigan, Kieran Moloney, and Conor Stakelum others to work extremely hard for the Sarsfields cause.