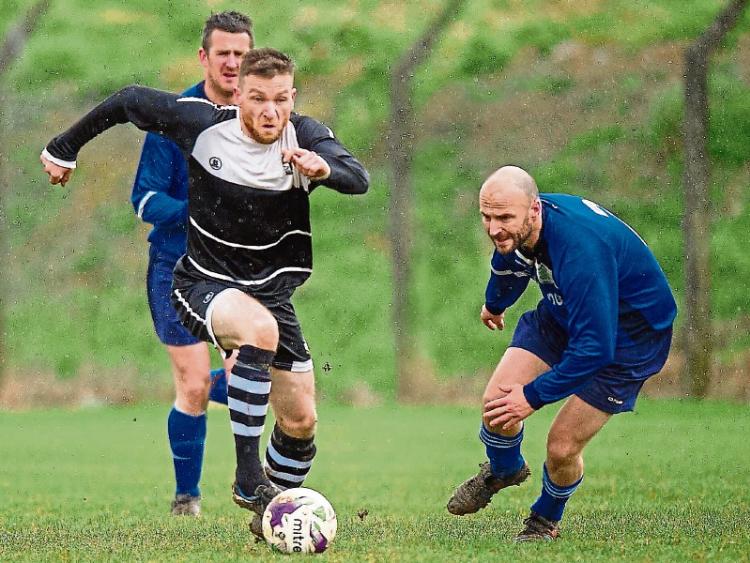 Darren Murphy had a great chance to equalise for Carrick United from the penalty spot 15 minutes from time but his chance went wide.

This Munster Junior Cup game was dour and tough from the word go on a windy day and on a pitch where there was a game played earlier in the day, making it cut up badly and disruptive of the nice football the TSDL champions like to play.

The home side started well and had a number of half chances early on, but as the half progressed the Saints grew more and more into the game. Paul Breen, Ollie O’Driscoll and Jimmy Carr all had chances rebuffed before the home side probably had the best chance of the half twenty minutes in when a corner kick was cleared half-heartedly and the smacked back into the area again only flying to safety via the bottom of one of the posts. That was as good as it got and the teams went to half time scoreless.

In like Flynn - Shane scores four for Clonmel Town

The visitors finally took the lead four minutes after the resumption however when a John O’Brien cross was deflected into the net by a Carrick defender for an own goal. The Waterford League side  were given a cast iron chance to get back into the game when they were awarded a penalty 15 minutes from the end, but Darren Murphy hit it wide of Derek Breen’s goal to groans from the home crowd.

Derek Breen was then forced to save well from Keith Walsh two minutes from time, but when the subsequent corner was cleared and with time running out Joey Mulcahy broke away down the right and crossing for John O’Brien to head home from six yards.

This sparked an exodus from the ground, with  Saints  marching to is the 5th round draw.