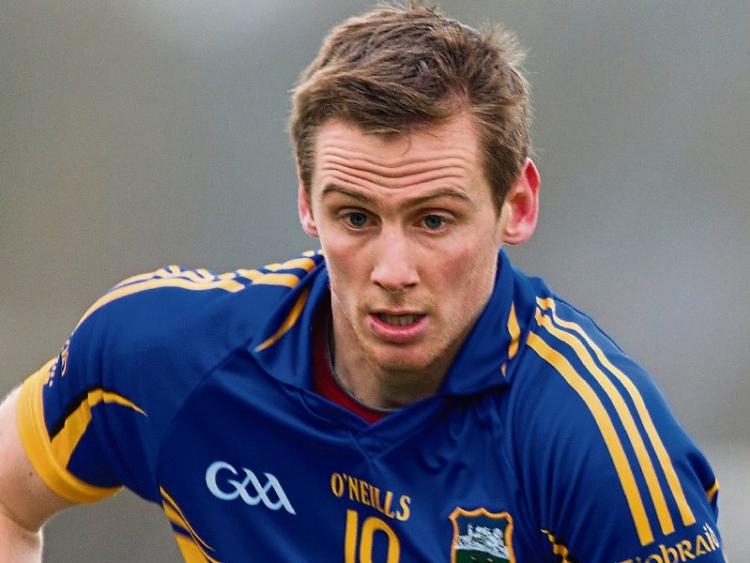 Conor Sweeney scored a first half penalty for Tipperary but ultimately it was Meath who were victorious by four points at Navan today.

Tipperary’s Division 2 National Football League campaign got off to a disappointing start in Navan this afternoon with a four points defeat to Meath, 0-15 to 1-8, the Royals finishing the stronger after Tipperary had bravely hung in for most of the game.

On a dry but bitterly cold day for football, Meath played with the advantage of the strong breeze and assumed the lead after three minutes with a free from Michael Newman but Tipp were back level two minutes later after Brian Fox earned a free which Liam McGrath converted.

Against the elements, Tipp were doing well in keeping The Royals at bay and it took another Michael Newman free in the 15th minute to restore the lead for the home side.

Meath began to come more into the game after that with Shane McEntee kicking the game’s first point from play to double their advantage before another Newman free had the hosts 0-4 to 0-1 to the good after 19 minutes.

It got even better for Meath when Thomas O’Reilly pointed two minutes later to extend the advantage to four as Tipp began to look a bit stretched.

Moyle Rovers’ Liam Boland had Tipp’s first score in almost 20 minutes when soloing through to fist over in the 24th to make it 0-5 to 0-2, but Michael Newman with his first from play restored Meath’s four points lead 28 minutes in.

Tipp then got a huge boost when a free from Conor Sweeney way out towards the wing came back off the post and just as Dan O’Meara was about to react to the dropped ball the referee adjudged a leg trip and awarded a penalty to Tipperary. Up stepped team captain Conor Sweeney to blast low into the corner of the net to reduce it to a one-point game at after 31 minutes.

Michael’s Newman fourth free of the half just before the interval left the score at 0-7 to 1-2. With the breeze to come at their backs for the second period, Tipperary went to the break happy enough with their performance for the first 35 minutes.

A superb left footed point from Brian Fox gave Tipp the opening score of the second period two minutes in but it was quickly cancelled by a Ben Brennan reply for Meath to make it 0-8 to 1-3 before Niall Kane stretched it to three for The Royals a couple of minutes later.

Thomas O’Reilly was next on the scoreboard for Meath, after a great run by Killian O’Sullivan, an influential switch for the hosts at half-time, to make 0-10 to 1-3. Meath, against the wind, were definitely the better side at the start of the second period.

A Liam McGrath run forced a free for Tipp which Conor Sweeney superbly pointed to edge Tipp a little closer, before the Loughmore/Castleiney man added another point from play to make it 0-10 to 1-5 and bring Tipp back to within two.

Liam Casey then spurned a goal chance for Tipp after a beautiful tap-down by Conor Sweeney with the Ballyporeen man sending over a resultant free to bring the game back to the minimum after 16 minutes of the second half at 0-10 to 1-6.

A further Conor Sweeney free after a technical foul by a Meath player levelled matters after 55 minutes with Tipp coming more and more into it. Were Tipperary going to achieve a winning start away from home for the second year in a row, having beaten Cork in Páirc Uí Chaoimh in last year’s opener?

Parity though lasted just a minute with Thomas O’Reilly kicking his third point of the game for Meath (0-11 to 1-7).

James McEntee then had a rousing point from wing-back for the hosts to double their advantage with 10 minutes to go.

A right-footed free by Liam McGrath after Jack Kennedy was fouled brought it back to just one again but quickly Michael Newman responded with yet another free to make it 0-13 to 1-8 with eight to go, but alas it was to be Tipp’s last score of the game.

Five minutes from time a second yellow for Steven O’Brien left Tipp a man short after an awkward challenge on an attacking Meath man making Tipp’s task all the more difficult as the game reached a climax.

Two late frees by Michael Newman as Tipp came under great pressure pushed the home’s side advantage to four before the final whistle for a final score of 0-15 to 1-8.

Without the availability of some of their start players, Quinlivan, Kiely and Maher, it was always going to be an uphill struggle for Tipperary. They can take heart though from some excellent performances on the day, with Brian Fox, John Meagher, Alan Campbell, Daire Brennan, Liam McGrath and Conor Sweeney doing well. But with some big names and big games still to come, the home game against Fermanagh on Sunday next in Thurles is now an early must-win game for Liam Kearns’ side.

The other full-time scores in Division 2 today were: