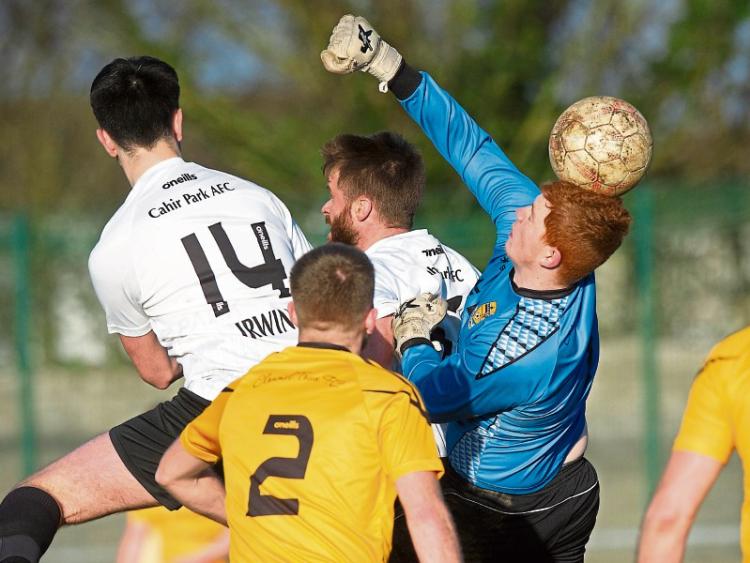 It’s hard to believe that Cahir Park’s season has already finished in the second week of February while Clonmel Town are only winding up to the most important weeks of their year.

But that was how it was as Cahir  Park visited Town on Sunday last, bringing a young side with a number of debuts given out to players who will no doubt become important for them in the future years ahead.

The home team started the brighter and forced an early save out of Adam Gallagher, who was one of these new debutants and he did well to keep Town at bay a number of times throughout the half as they looked the more dangerous throughout.

He was helpless however six minutes from the break when the hosts finally got some reward for their good play and went ahead courtesy of a goal by Ian Cleary.

This was how the game went to the break but Town were sharper coming out in the second period with Cleary again caught the Park defence napping and fired in his and his side’s second.

To their credit the visitors didn’t give up and pushed hard to get back into the game.

In the 66th minute the home side made the game safe when Craig Guiry finished from close range. Cahir did get a consolation goal five minutes from time when Shane Murphy finished to the corner, but that was all it would turn out to be.

All in all the visitors can be very happy with their work since promotion and with the success of their youths looking like it could bear fruit, the future seems bright for the TSDL’s oldest team.

Due to the effects of bad weather this game was moved from Bansha to Clonmel Celtic’s home pitch on the by-pass and the change of venue certainly helped the Clonmel side to carry on their good run of form and pick up another three points.

The season has been a little disappointing for Bansha after their heroics last season and their Delaney Cup win in pre-season but they have still consolidated as a Premier League side and will be looking to kick on again in the next few years ahead as they see numerous younger players begin to come up from  juvenile ranks.

In this game the weather conditions made it difficult with Bansha starting better with practically a gale force wind behind them. The Clonmel side then made things harder for themselves by being reduced to ten men but despite this managed to hold the game scoreless until the break.

The tables turned now condition wise it was the hosts that started making the better chances in the second period and they finally capitalised 15 minutes from the end when Kyle Ryan found himself in space in the visitor’s area and he finished well to the corner of the net.

Minutes later Bansha found themselves also reduced to ten men and this pretty much ended any chance of them getting anything from the game as the Clonmel side’s defence took a stranglehold on the rest of the game.