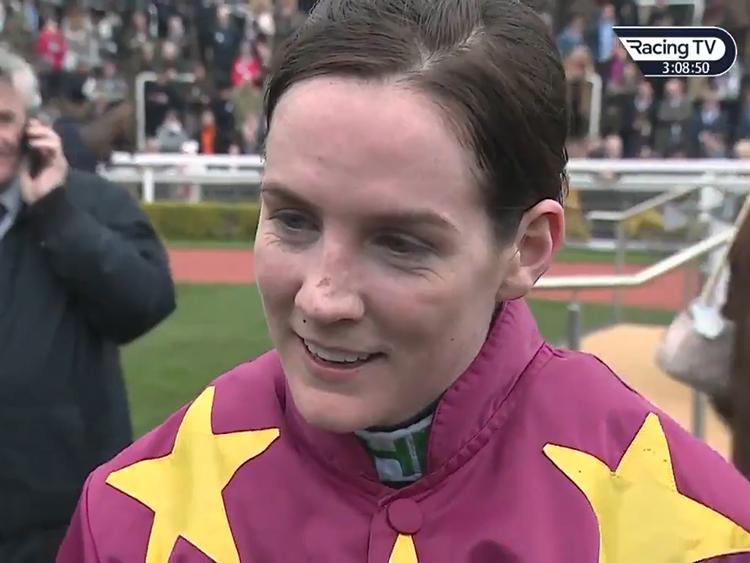 Rachel Blackmore pictured during an interview with Racing TV following her Cheltenham triumph.

See below for Rachel Blackmore's interview with Racing TV following her Cheltenham triumph on Friday.

"I'm just the lucky one that gets the leg-up on the day" - the modest @rachaelblackmor can reflect on a #CheltenhamFestival Grade 1 win and look forward to a bright future now for Minella Indo pic.twitter.com/h5paPKjfBZ

Rachel Blackmore has now joined Gee Armytage (1987) and Nina Carberry (2016) in the record books as only the third woman to ride a double at the festival.

The win represented Blackmore’s second of the week following her win on board A Plus Tard on Tuesday. The 5/1 favourite A Plus Tard (who is trained by Henry de Bromhead in County Waterford), romped home in the Novice Handicap Chase.

Rachel Blackmore is, of course, currently battling against Paul Townend in the race to become this season’s Irish champion jump jockey.

A daughter Killenaule’s Charles and Eimir the 29-year-old is a former pupil of Moyglass National School and Loreto Secondary School in Clonmel. Rachel studied science in UCD, but switched courses to study equine science at the University of Limerick.

And, Rachel has enjoyed extraordinary success since turning professional four years ago. Blackmore rode eleven point-to-point winners and seven winners as an amateur rider before graduating to the professional ranks in March 2015.

With thirty-two winners Blackmore became the first female jockey to win the conditional riders’ title in the 2016-17 season.

Not surprisingly, her ability has not gone unnoticed and she won two awards towards the end of last year - the Irish Times Sportswoman of the Month award for October followed by Horse Racing Ireland’s National Hunt Achievement Award.