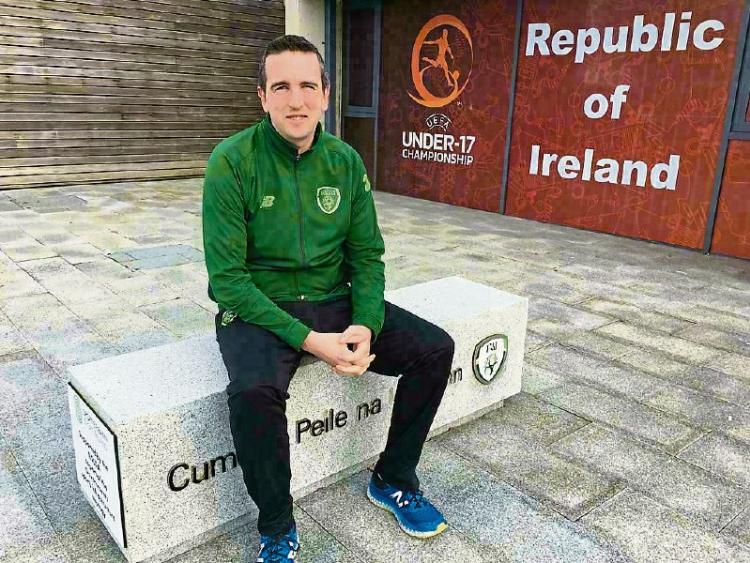 The first impression you get on arrival  at the National Sports Centre (NSC) campus in Dublin is the sheer scale of the facility.

Clerihan-based David Lenane makes the two-hour commute to the NSC in Blanchardstown every morning  to fulfill his role as the national co-ordinator  for women’s football at the FAI headquarters on the site.

It is  very much a different world  from the Priests Field  in Clerihan where David would have overseen coaching sessions for  underage boys and girls from clubs all around the county  in his role as FAI development officer for South Tipperary.

It was a post he held  since November 2006  before stepping up to take on his current job with the FAI in January of 2018.

Now a year into the job, David has settled in the role and is relishing  the challenge of being handed the responsibility for  the  development of women’s football in Ireland.

A native of West Waterford,  David Lenane made Clerihan his home    when he decided,from a geographical location, it allowed him best access to all of South Tipperary  a year after taking up the post,  which was co- funded by  South Tipperary County Council and the FAI  in 2006.

He was very grateful to the Clerihan community for their support and in particular to the late Fr.  Albie O’Bric, who allowed David and the FAI use the Priests Field   to train the emerging talent squads made up from clubs from  throughout South Tipperary.

As the years went on  the community developed the sporting facilities  for all sports on a site outside the village. David is full of praise for the vision shown which enabled the provision of shared facilities for football, GAA, athletics and community recreation  to become a reality.

The concept behind the NSC project and that behind the Clerihan community project, while vastly different in terms of scale,  bear some similarities in terms of the concept  of the sharing of sporting facilities.

"They were ahead of their time really in Clerihan,  there was so much to admire about the Clerihan community in their drive to provide facilities that could be used for all sporting groups" said David.

"The very same concept is behind the development of the NSC here, if you look around you see  all the different sports are catered for and more are on they way" said David, as he pointed to a huge area adjacent to the FAI headquarters where the rugby association are now develping facilities.

"Everybody is together which is how it should be, we are all doing the same thing, creating a safe, friendly environment for people of all ages to be physically active and to play and enjoy  playing sport of any kind" said David.

On taking over the national job he started to call on the experiences he gained while in his role in South Tipperary to help him develop football for young girls and women.

After a mapping exercise, David identified areas where women’s football was weak in the country and just like he did in South Tipperary  he set about  establishing an infrastructure from the bottom up.

His tried and tested South Tipperary template was used to good effect in Louth and other  counties where little or no infrastructure existed.

The work David carried out in South Tipperary, in particular, for women’s football can be seen by the progress made  by young players who would have embraced the system created by  David  and developed in conjunction with an incredible number of dedicated volunteers within  the clubs throughout South Tipperary.

"At the time I was one of the first FAI co-funded development officers appointed outside of Dublin. This was breaking new ground at the time. It was a big step for the FAI and County Council to take, and now there are up to 60 FAI development offices around the country with up to 50 of those along the same co- funded model  that I was involved with," said David.

After leaving his job with  Waterford Sports Partnership,  which he volunteered to do for free  just to get started after he graduated from WIT, David arrived in South Tipperary.

He  placed an emphasis on social inclusion and providing activity for  young people with special needs  as well as  working with the clubs. He developed  the boys set-up  and began  encouraging  clubs to  offer the same opportunities to girls.

"At the time there was no league for girls  so we started to encourage the clubs. We wanted every club to give girls an opportunity to play football and a girls league started in 2007/2008, with U-12 and U-14. It started out with five clubs  out of fifteen clubs, now ten clubs in South Tipperary provide football for girls, there are leagues  for all age agroups from U-8 upwards to senior leagues" he said.

He is  proud of the work  carried out by the clubs in South Tipperary, how  football for young girls and women developed and participation levels  grew every year.

It is the  pathway that greatly assisted the career of Aoibheann Clancy, who is now putting in impressive performances on the international stage  playing for Ireland’s U/17s. Aoibheann played for Kilburn Celtic (combination club of Kilbehenny Celtic and Burncourt Celtic) before she went on to play for Tipperary Town ladies FC before joining Limerick FC.

"That is testament to the work carried out by their coaches in the clubs in South Tipperary" said David who lives in Clerihan with his wife  Mary Bridget and three young children -  one year old Harry,  Matthew (5) and Georgina(7) who both attend Clerihan national school.

David, who has visited his counterparts in the women’s  game in St.George’s Park in England and Hampden Park in Scotland to look at the struture in those countries, wants to see girls all over Ireland being provided with the same pathway and opportunities.

The FAI officer said young girls all over the country interested in playing football had excellent role models to look up to on the Ireland senior women’s team, who are preparing for the European qualifiers to be held in England in 2021 having been drawn in a difficult group with Germany, Ukraine, Montenegro and Greece.

"We are all excited by the draw, it is a tough one but it would be amazing to qualify for the finals in England.The senior women  are a great group, willing to give so much time and encouragement to young players. They are all excellent role models that have  come through the system and some of them are playing for Arsenal, Manchester City and West Ham.We had a big group of girls from Cahir up here for coaching and the senior girls were on campus that day and they just could not do enough for the Cahir girls," said David.

Visiting groups of girls from South Tipperary are not the only familiar faces David encounters in the surrounds of the National Sporting Campus.

He bumps into John Treacy now and again, the CEO of Sport Ireland  and Olympic marathon silver medallist from the 1984 Los Angeles Games.

"I am from Dromana, near Villierstown, and while I  am too young to remember him running past our house every day to get to school in Cappoquin, it is amazing to meet him in this environment," said David.

David  said he is privileged to be entrusted by the FAI with  the task of developing women’s football in the country. He enjoys working  at this level  and feels his experience in South Tipperary has given him a solid grounding to enable him take on the challenge.