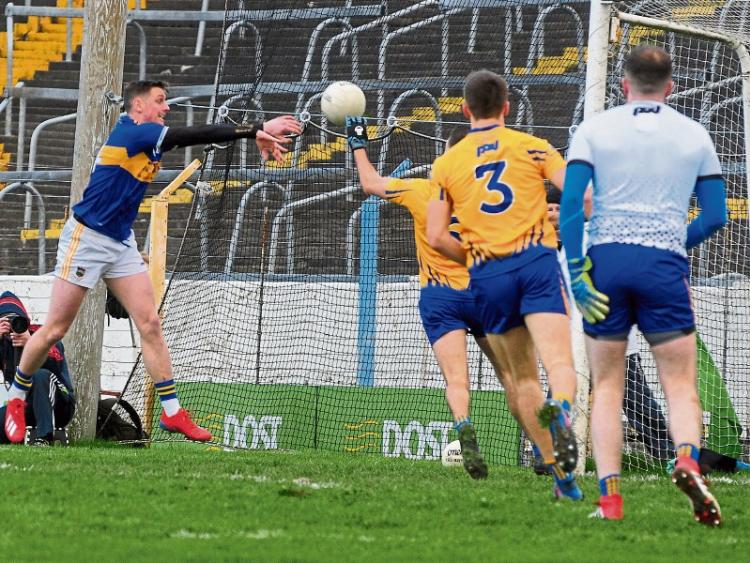 THE PERFECT START. Tipp captain Conor Sweeney slams home a second minute goal to give Tipperary a great start against Clare at Semple Stadium on Sunday

After Sunday’s defeat against Clare, which condemned his side to Division 3 football for next year, Tipperary manager Liam Kearns was making no excuses whatsoever.

“We’ve been on the back foot all along and it has been a really difficult campaign for us. We didn’t do our business here today so. We don’t have any complaints now. We fought hard in all the matches. The amount of players we have been missing has told all the way. We have just been lacking that bit in every game and it was the same here today. It was disappointing to lose the game because we were in a winning position and credit to Clare as well they got the job done when they needed to.” said Kearns.

On perhaps the most difficult day of his four-year tenure as Tipp boss, the Kerryman saw the period immediately after half-time, in which his side let their half time lead evaporate quickly,  as the decisive period of the game. When questioned about it he replied.

“That has happened to us now on a couple of occasions. The game against Cork here we gave away four points after half time. We discussed it saying that the first quarter of the second half was vital and we conceded 1-5 to no score in the 10 to 15 minute period after half-time. That was the turning of the game really. We got back into it and got back on top again and put ourselves three clear with less than five minutes of normal time to go and then there was a bit of injury time. But that was never a safe lead when they had the wind. It was a very open game and an attacking game. Lots of people have been looking for us to attack and now you can see out there how much we conceded when you threw everything into attack. That’s the reality of it,” lamented the manager in the wake of his side’s relegation.

The story of the league campaign from Navan back to Thurles on Sunday last, and all places in between, has been the chronic injury list all through. After Sunday’s defeat the Tipp boss opened up even more as regards the injury situation, with former All-Star Michael Quinlivan being the main focus. 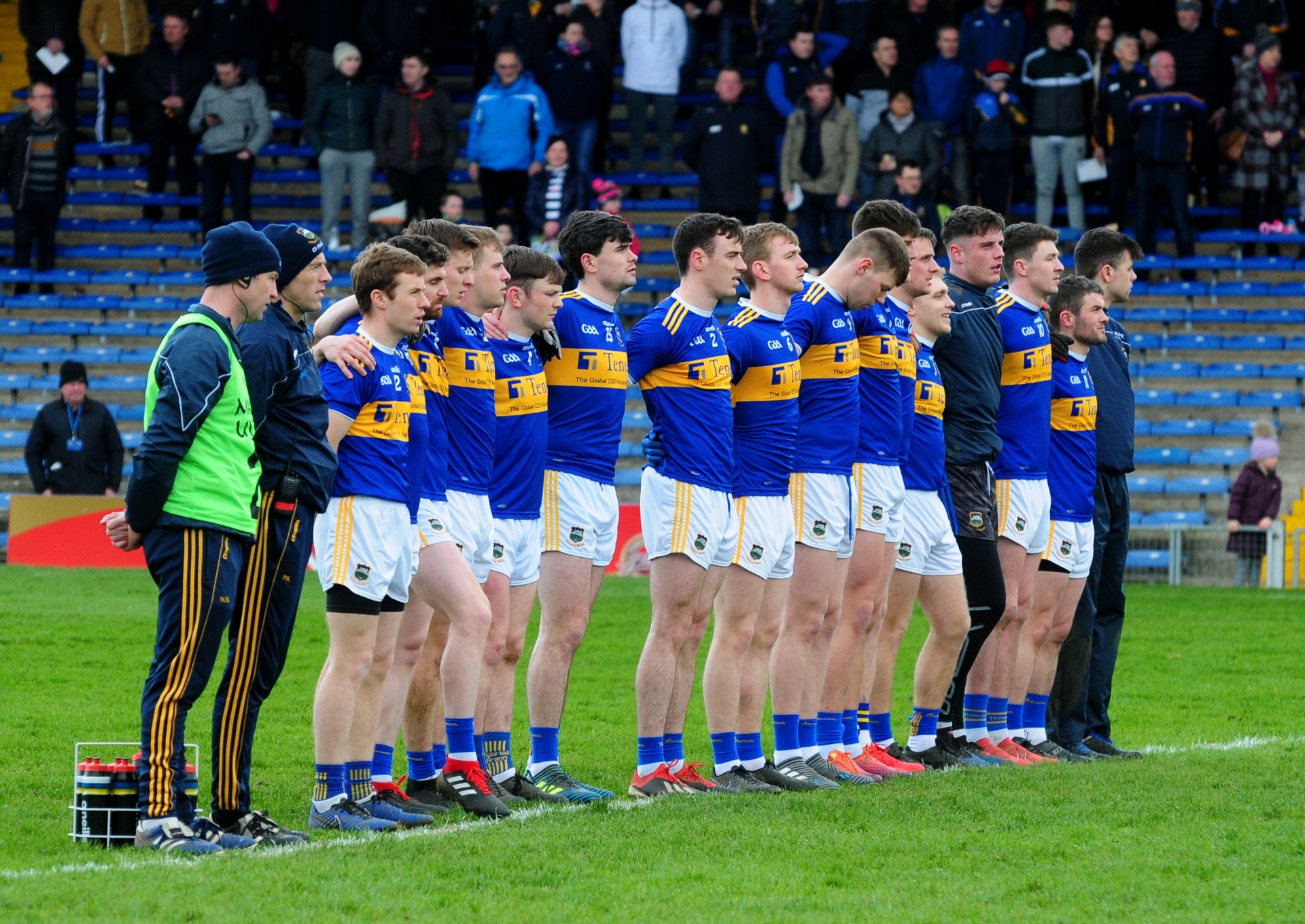 ABOVE: The Tipperary footballers line up for Amhrán na bhFiann on the half-way line at Semple Stadium on Sunday prior to their crunch game with Clare.

“Mikey isn’t right, he isn’t even close to right. Mikey was pushed in there. He has no training done, no work done. That was his second game since before Christmas. He isn’t right. But in the circumstances we had to force him in. Mikey would have a lot more influence on the game if he had been playing all the way through the campaign.”

Continuing he added: “Shane O’Connell is back he is on the bench. Bill Maher is back on the field but again needs time. Robbie Kiely will be back on 3rd of April, Josh Keane will be back into the panel also. We have all these players coming back but when you are missing as we are, four or five, or half of your championship team, it’s a big, big ask. And I have to say the likes of Daire Brennan, Dan O’Meara, Michael O’Reilly in goals, they have all done great, they have all been thrown into the deep end and they have all acquitted themselves well in a really pressurised situation.

“And if we had survived it would have been a great campaign because we would have had a deeper panel but we didn’t. We go down to Division 3, we’ve been there before, and I think they will bounce back again. I think they are plenty good enough to come straight back up,” commented Liam Kearns.

Looking ahead to the championship, the former Limerick and Laois manager, wasn’t jumping any guns.

“Our main aim anyway this year is the championship. We want to perform well in the championship. We are surely due a run with regards injury and so on. That’s all I want now is a team fit and healthy for the championship. Let the cards lie where they go. If we are not good enough then fair enough. I don’t want to have any excuses. I just want a team that’s fit and ready and play at full tilt and see where we are at.

“It’s seven weeks to Limerick and we’ll be under pressure to get the injured players who are just back fit and ready for that game. We need a break as regards injuries and we need to be able to train them properly. It’s all about getting over that game. That’s the game that will count now,” added Kearns as he prepares to go head to head with a county he once led to a Munster Senior Football final.

“It has been the toughest league campaign that I have ever been involved in. It was one thing after another. We were on the back foot from the very start. And we never got a break right to the very end and unfortunately we didn’t get a break out there again today.  We just didn’t get a break all the campaign.”

But you could sense that the hurt might be the catalyst that might spur Tipp on for the upcoming championship now just weeks away. 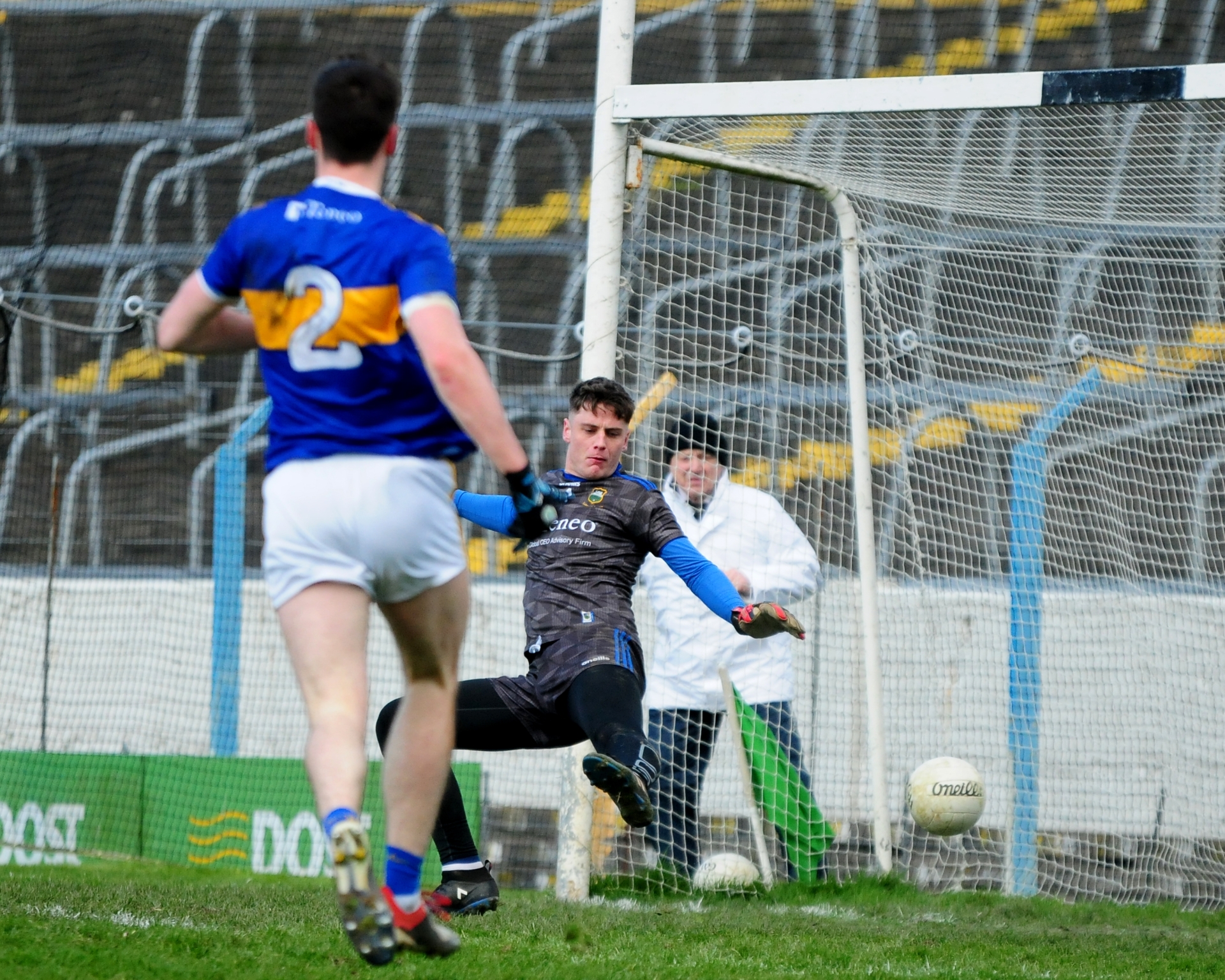 “Judge us when we have our full team out on the pitch, how we are playing and how we evolve. That’s when you can judge us. We have been plugging gaps and even the guys who have been playing all the time, even the 15 that are going out on the field, they are not 100% either without going into it. It’s been a really tough campaign and we’ve been plugging gaps, trying to get there, trying to get results. That’s all we wanted. We didn’t want anything other than to stay in Division 2. In fairness to the lads I can’t fault them for character or effort they never gave that up and they never stopped trying right to the very end today they were trying, added Kearns.

And as to how those players were at that moment in the dressingroom...