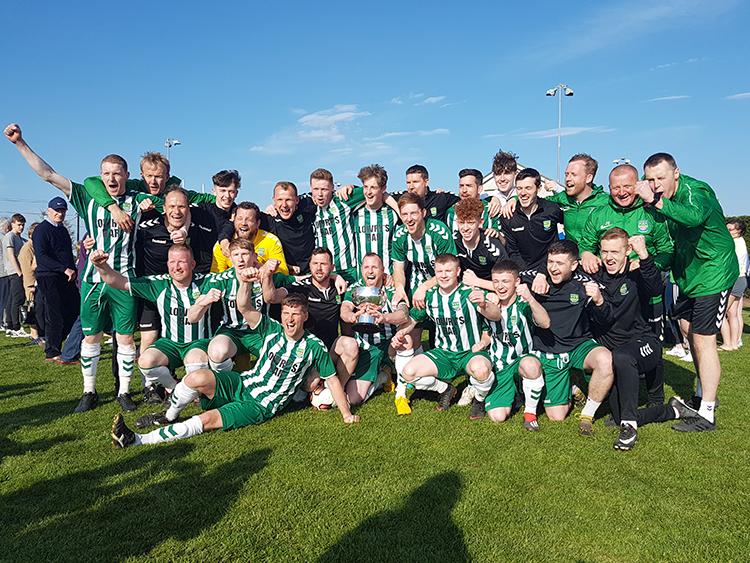 St Michael’s did not perform particularly well, but James Walsh’s men worked incredibly hard and it was obvious that this provincial crown meant quite a bit to a Saints outfit who had lost the last two consecutive Munster Champions Trophy deciders.

In first half injury time Saints ‘keeper Adrian Walsh saved an Eoin O’Brien penalty and the outstanding Walsh also saved Eoin Hayes’ spot kick during the shoot-out. Christopher Higgins, David Slattery, John O’Brien and Willie Armshaw all did the needful from twelve yards and when Newmarket Celtic responded in kind the responsibility fell to Johnny Kennedy with the Saints’ fifth. Kennedy made no mistake when burying his effort and St Michael’s were left celebrating a terrific success.

Below you will find a video of Sunday's penalty shoot-out at Newhill Park.

Previously in the competition (which pits all of the respective junior league champions in the province against one another) St Michael's had already accounted for Abbeyfeale United (2-0) and Carrick United (5-0). Although the Saints found themselves relying on Adrian Walsh to conjure a whole series of saves in this encounter James Walsh’s men worked incredibly hard and were, on balance, good value for this win.

Perhaps centre-forward David Slattery best illustrates all that is good about this St Michael’s team; the Saints’ sense of humility is extraordinary with each and every player prepared to give of himself for the cause. Irrespective of the sport involved this attitude sets apart the truly champion teams.

Christopher Higgins, Seán Guerins, Colin Bargary and Shane Ryan were all outstanding for a St Michael’s team who are chasing an extraordinary five trophies this season. 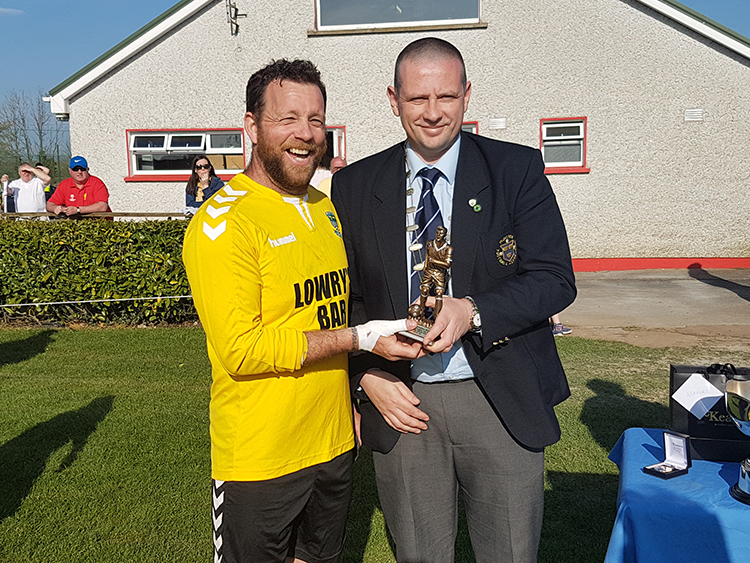 Following the Munster Champions Trophy final St Michael’s goalkeeper Adrian Walsh was presented with the man of the match award in recognition of his terrific performance.

With star player Jimmy Carr ruled out through injury St Michael’s were up against it right from the off in this final. The Saints dug in well in the opening half and Adrian Walsh was not asked to make a save until the 32nd minute when he coped admirably with David McCarthy’s stinging shot.

Adrian Walsh had to be on his toes five minutes later when he did especially well to save from Kieran Mahoney and Eoin Hayes in quick succession.

Newmarket Celtic didn’t want the half to end, however, as they proceeded to dominate the closing minutes. Once more Adrian Walsh was called on to save an Eoin Hayes effort in the 39th minute and the Clare side appeared to have carved out a significant opportunity in the 47th minute when Richard Ryan fouled David Reidy for a penalty. Adrian Walsh, however, saved Eoin O’Brien’s spot kick and sprung to his feet to also save O’Brien’s follow up.

SAINTS NOT DOING THEMSELVES JUSTICE

St Michael’s were simply not doing themselves justice in this final so far, but the Saints were much better immediately after the break. And, James Walsh’s men took the lead in the 55th minute when Joey Mulcahy’s clever free kick on the left flank found the unmarked Shane Ryan. Although Ryan’s initial effort was blocked the winger buried his follow-up (1-0).

See below for a video of Shane Ryan's goal against Newmarket Celtic.

In the 63rd minute Adrian Walsh saved brilliantly from Eoin Hayes once more, but with nineteen minutes to play the St Michael’s ‘keeper coughed up a penalty when he fouled the raiding Eoin Hayes and the Newmarket Celtic centre-forward planted his spot kick in the bottom right hand corner (1-1).

With thirteen minutes to play Newmarket Celtic’s David McCarthy and the Saints’ Joey Mulcahy were sent off following McCarthy’s foul on Shane Ryan - Mulcahy took exception to the challenge and was sent off alongside McCarthy for his trouble.

Another Newmarket player may well have walked in the 85th minute when Tino Nzvaura appeared to go in dangerously high on Willie Armshaw, but the Celtic midfielder was only cautioned following the challenge.

With both sides utterly exhausted extra-time passed without incident until the last minute when the Saints’ Colin Bargary led a St Michael’s counter-attack. Newmarket centre-half Stephen Kelly brought down Bargary and although Kelly denied St Michael’s a clear goal-scoring opportunity as the last defender the Celtic player was merely cautioned for the infraction. 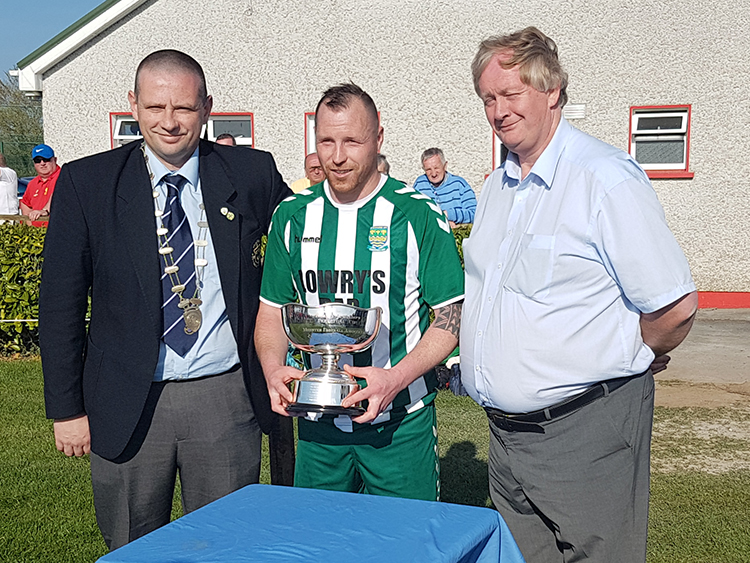 Next up for St Michael’s is a Munster Junior Cup semi-final against Geraldines (Limerick District League) on Sunday, April 28 at the Market’s Field in Limerick (kick-off 2pm).

In the quarter-finals St Michael's recently made the trip to Limerick to take on and beat Kilmallock United (4-1) in the last eight of the prestigious competition. In the fifth round (last sixteen) the Tipperary South & District League champions hosted and beat Cork outfit Lakewood Athletic 3-1. Thus far the Saints have also beaten Carrick United B (2-0), Clonmel Town (4-1), Cahir Park (3-0) and Wilderness Rovers (2-0) to reach this stage of the competition.

St Michael’s are through to the New Balance FAI Junior Cup final following the Saints’ recent 2-0 win over Glengad United at Cooke Park in Tipperary town. This semi-final was a tense affair before goals from Jimmy Carr and Joey Mulcahy (penalty) booked a place in the decider at the Aviva Stadium.

The last eight in the competition pitted St Michael's against the might of Evergreen in Kilkenny and the Saints prevailed on a 1-0 scoreline. In the last sixteen St Michael's beat Mervue United 2-1 while this outstanding Saints team, who won the competition outright as recently as 2014, saw off the challenge of last season’s semi-finalists Newmarket Celtic (Clare & District League) in the last thirty-two (2-0). Previous to that encounter St Michael's beat Leitrim's Manorhamilton Rangers (2-1), Tipperary Town (7-0), Old Bridge (10-0) and Mullinahone FC (6-0).

St Michael’s have also progressed to the semi-finals of the Tipperary Cup. The Saints’ Tipperary Cup quarter-final victory over Bansha Celtic proved a sweet one for St Michael’s. Their only hic-cup this season occurred in the John Delaney Cup (a pre-season tournament). St Michael's beat Borroway Rovers (4-2) and Blackcastle Templemore Harps (2-0) before losing the final of that tournament to Bansha Celtic (1-3). And, Bansha Celtic also presented the Saints with their only league defeat this season.

In the first round of the Tipperary Cup St Michael's saw off the challenge of Cashel Town B (5-0) before accounting for Peake Villa (4-1), but in the recent Tipperary Cup quarter-final Bansha Celtic managed to trouble St Michael’s once more. The contest finished nil-all before the Saints won a sudden death penalty shoot-out 4-3. The St Michael’s B team are also through to the semi-finals of the Tipperary Cup having seen off Glengoole United in the last eight (3-0).

St Michael’s were officially crowned Tipperary South & District League Premier Division champions following an 11-0 win over Tipperary Town on Tuesday, April 16. The Saints have already completed the league double over Clonmel Celtic, Clonmel Town, Vee Rovers, Cahir Park, Tipperary Town and Old Bridge. St Michael's have also beaten Peake Villa while their only defeat of the season materialized away to Bansha Celtic. The Saints' remaining league games comprises of a home game against Bansha Celtic and away to Peake Villa.