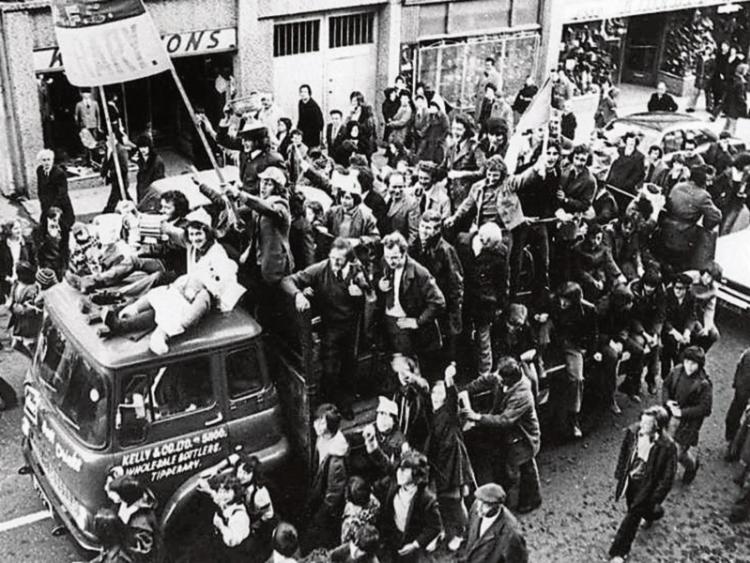 I woke early on  May 12, 1974, but unfortunately not early enough. They were gone already, my dad, older brother and Nanny. They promised they’d bring me with them, and my eyes welled up with tears when I realised the scale of the deceit that my loved ones had visited upon me.

I was five years of age and it’s one of my earliest childhood memories. I think it was the first and only time my brother attended a St Michael’s match, that day the Saints brought the ‘holy grail’, the FAI Junior Cup home to Tipperary Town, beating Dublin giants Tolka Rovers after extra time.

For me, the love affair would begin three years later when I was brought to the famous old ground in the “Back of the Chapel”. But it would be 40 years later before the FAI Junior Cup returned. Great teams, players and managers had given everything to win it in that time, but always came up short.

We had heartbreak against Portmarnock in 2000. More two years later against Fairview. And it took eight more years before we had another shot, coming up short again against Pike Rovers of Limerick, in Turners Cross in Cork.

Twelve months later, more agony out of the Treaty County, when Fairview again struck down the mighty Saints, left us wondering if we ever going to march in again.

Black days spent trying to lift the hearts of players when your own was broken.

Strangely enough one thing kept me believing. The experiences of Aherlow  Gaelic football senior team who had lost so many county finals before finally winning one, provided inspiration from another code that journey knew that the journey could be completed.

Don’t stop believing they said, and we didn’t.

We would persevere and we would be ready the next time, and that day came on May 25, 2014. The boys were ready and before a huge crowd of Tipperary people from all clubs, codes and colours, “Michael’s” won comfortably against a Ballinanty Rovers side from Limerick, who were thought lucky to be there. That was unfair, you need more than luck to get to an FAI Cup final. We know.

Our supporters adjourned to a hotel for refreshments and I plonked myself into an armchair, completely emotionally exhausted. My wife got the drinks, but there was no elation then, just a huge feeling of relief. My thoughts went to those no longer with us who had given everything to achieve this. This wasn’t just won by the team and management, as brilliant as they were. It was won by sheer attrition over decades, getting knocked down and getting up again. Always believing.

What was to follow meant so much too. As the team bus and supporters arrived into Tipperary Town, people lined the streets of O’Connell Road. It was unbelievable. The team had done Tipperary town proud and the town reciprocated. My eyes welled up with tears again. This time I was 45 years of age.

I don’t remember much about the hours that followed, but we go again this Saturday. This time against the junior football juggernaut of Sheriff YC. Again on a train from the Junction and I've no doubt we'll be ready. This is another special team, but there have been many special St Michael’s teams. I’m not religious, but I’d ask any of you who are to mention us in your prayers. Because this is going to come down to a bounce of a ball or a bit of luck or a stroke of genius.

Whatever happens, the hardcore Saints fans will stand shoulder to shoulder with our players. We will stand or fall together.

I’m bringing my wife and two children with me. No one gets left behind on my watch. My dad is going too.

And yeah, '74 will get a mention. It still rankles with me.