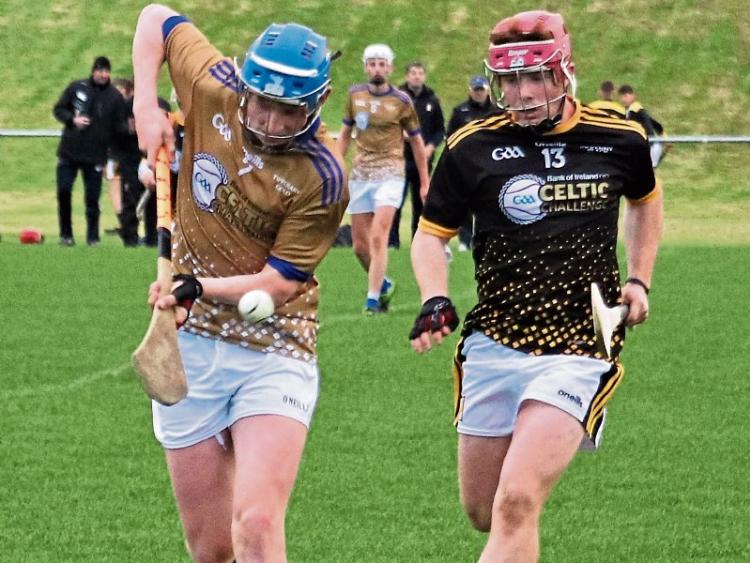 A strong opening quarter and a strong finish to the game by Tipperary Gold were crucial factors to their hard fought victory over Kilkenny Black in this second round Celtic Challenge tie in Dunmore, Kilkenny, winning 1-15 to 1-11.

Five points from Tipperary Gold’s Daniel Moloney (three from play, two from frees) in the first fifteen minutes, against two points for Kilkenny Black for the same period, provided the visitors with a start to the match that they would have settled for beforehand and with a lead that they would retain for the duration of the game.

Two further points from the industrious Paul Nolan were welcome additions to the Tipperary tally at a time when Kilkenny Black had firmly settled and were exerting a lot of pressure on the Tipperary backline including one rasping shot that came back off the crossbar.

The Kilkenny Black pressure was met with stout resistance from Aaron O’Sullivan, Dara Ryan, Jack Hassett and the remainder of the Tipperary defence, ensuring that it did not manifest itself on the scoreboard other than two pointed frees from John Doheny.

These were matched by two points from play from the Ballingarry duo of Kieran Lyons and Declan Hayes to leave the half time score Tipperary Gold 0-9 Kilkenny Black 0-5.

Shortly after the restart Kieran Lyons was to strike again, this time with a goal following a great solo run and a fine finish. He followed this up with a well taken point under pressure either side of two pointed frees from John Doheny for Kilkenny Black whereas for Tipperary Gold Daniel Moloney added to his points tally also from a free to put his side seven points up.

At this point momentum was to swing. Tipperary Gold’s seven point lead was responded to in style by Kilkenny Black who scored 1-3 without reply including a goal from a well taken penalty by Nick Doheny to leave the bare minimum between the sides as the game was approaching its business end.

The Tipperary Gold players were to show a lot of composure however. Brian Óg O’Dwyer steadied the ship for them with a well taken point which was the culmination of a lot of hard grafting on his part. Josh Browne added another.

Kilkenny Black responded with a point from a free from Nick Doheny but O’ Dwyer and Browne were to oblige again with another point each for Tipperary Gold, their points being the last two scores of the game to leave the south and west Tipp lads four points to the good as the final whistle sounded.