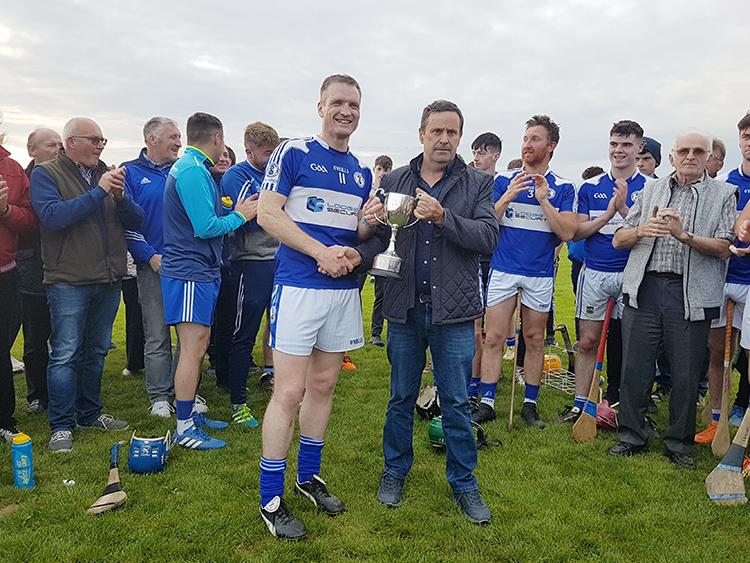 Two Daniel Ryan goals helped to propel Silvermines to a narrow win over Lorrha-Dorrha in a full-hearted North Tipperary Junior B Hurling League final at Puckane on Friday evening - for long periods of this contest the ‘Mines appeared the more accomplished side, but Lorrha-Dorrha manfully stuck at it and may well have snuck this one with a bit of luck.

Silvermines led by six points entering the final quarter, but Lorrha-Dorrha rallied with three late points before Daniel O’Donoghue created a terrific goal chance for Kevin Maher in the 59th minute. The centre-forward had the goal at his mercy, but Silvermines corner-back Declan Mulqueen intervened and his timely hook denied Lorrha-Dorrha a vital score.

The ‘Mines, however, were good value for this win. Maurice Leamy and Niall Curran were steady in defence and Gary Toohey gave a man of the match display in the middle of the field, but, ultimately, Daniel Ryan’s brace of goals decided the contest.

The sides traded points initially with Lorrha-Dorrha wing-back Conor O’Sullivan notching an absolute cracker in the second minute when he accepted a recycled ball from Barry Moran and drilled over off his right from long-range.

Daniel Ryan buried a rasper off his left in the fourth minute and the ‘Mines may well have plundered another goal in the seventh, but Daniel Keogh’s flick flew over the bar when a three-pointer looked certain (1-3 to 0-3).

Lorrha-Dorrha responded well to the challenge posed. With wing-back Denis O’Meara enjoying his outing his Lorrha-Dorrha colleagues fired over four points in succession to take a one-point lead (0-7 to 1-3) by the 20th minute. During this period Ciarán Duggan landed a free while Ross O’Meara, Kevin Maher and Dónal Kennedy added efforts from play.

Some sloppy tackling frustrated Lorrha-Dorrha thereafter with Daniel Keogh converting three successive frees before a David Boland point presented Silvermines with a three-point lead. The sides then traded efforts and retired at the break with three in it (1-8 to 0-8).

Although Lorrha-Dorrha closed the gap to two points immediately after the break the ‘Mines worked the ball forward well via some slick short puck-out routines and thanks to efforts from Daniel Keogh (free), Gary Toohey and Shaun Forde Silvermines were five clear (1-11 to 0-9) with twenty minutes to play.

A Ciarán Duggan free reduced the deficit and Lorrha-Dorrha cursed their misfortune in the 41st minute when Maurice Leamy’s brave block denied Dónal Kennedy a clear shot at goal. And, just three minutes later the ‘Mines plundered their second goal when Daniel Ryan gathered Gary Toohey’s delivery and finished smartly after Lorrha-Dorrha ‘keeper James Dunne had misjudged the flight of the ball (2-11 to 0-10).

Lorrha-Dorrha refused to allow themselves to get discouraged, however, and thanks to points from Ciarán Duggan (two frees), Kevin Maher and the relentless Daniel O’Donoghue the gap was down to a very manageable three entering injury time.

Just then, however, former Mullinahone star Niall Curran read the play beautifully, stepped off his man and intercepted a Lorrha-Dorrha delivery. Curran’s subsequent stick pass found the hand of Mark Daniels in the middle of the field and he landed a terrific point off his right. Game over.