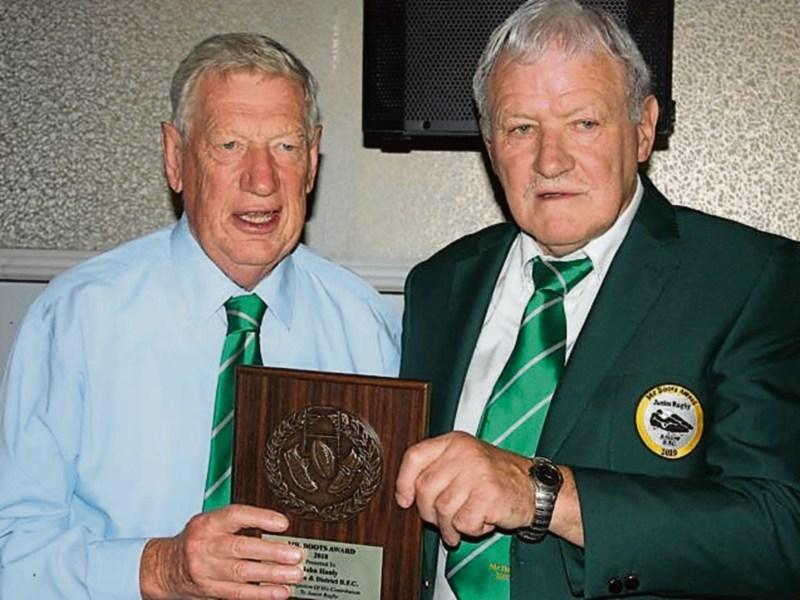 Kilfeacle & District RFC and Munster Rugby stood proudly together on Friday, May 17 when of their own; John Hanly was awarded the coveted and prestigious IRFU Mr. Boots Award for 2019 in front of a packed Ballykisteen Hotel.

John Hanly accepted the coveted green jacket to join an illustrious club that includes the likes of Niall O’Driscoll, Art Campbell and its first recipient back in 1981, Dick Smyth.

John was nominated and selected to receive the ‘Mr. Boots’ award for his outstanding services to junior rugby.

The Mr. Boots award is presented every year to someone who has excelled in their work and contribution to Junior Rugby. This award commemorates the outstanding work and effort put in by tremendous volunteers who were the backbone of junior rugby.  It was first presented  in 1981, it was given its name from the pair of boots that Willie John McBride wore against Arklow in his last match of competitive rugby for Ballymena.

John  is part of the backbone of the club, a man who has held many positions within the club including Captain, Coach, Chairman, and President to name a few.

But it is the work John does behind the scenes that sometimes is unnoticed that keeps our club ticking over, made John in our opinion a deserving nominee for the award.

With an attendance of 246 people, everyone was treated to a superb meal prepared by Ken and the Staff of Ballykisteen Hotel.

MC on the night was former Today FM sports presenter Paul Collins. Paul kept everyone entertained and made sure the night ran smoothly. The event was a great success with  attendees from the IRFU, the four provinces Munster, Leinster, Ulster and Connacht as well as players and members both past and present of Kilfeacle & District RFC  all who attended thoroughly enjoyed themselves.