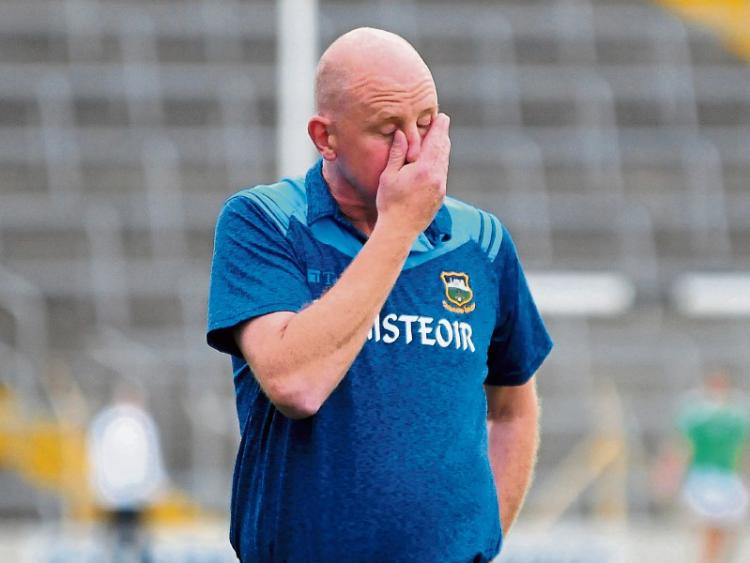 Frustration for Tipp manager Tom McGlinchey as his side relinquish eight points lead in defeat to Limerick at Semple Stadium this evening.

Utter frustration was the lot for Tipperary under 20 footballers on Tuesday evening at Semple Stadium, Thurles, when they exited the Munster Championship at the first hurdle in a very disappointing one point defeat to Limerick.

Indeed the hosts were left to wonder how they had managed to snatch defeat from the jaws of victory having led by eight points early in the second half, on a night that Limerick led just once. It was four minutes into time added-on at the end of the game when the Shannonsiders got their noses in front for the very first time. It is the only time when it matters and for the heroics of their comeback they fully deserved their victory.

Tipperary had led by three points at half-time, 0-8 to 0-5, and perhaps should have been more to the good such was their superiority in the opening period. But a dream start after the break in which Riain Quigley goaled inside a minute, followed by two quick frees both from Sean O'Connor put them eight clear and it seemed Tipperary could drive on from here for a home semi-final place with Kerry next week.

But Tom McGlinchey's side weren’t to score again for another 16 minutes during which time Limerick had re-asserted their challenge when scoring 1-4 without reply. Their goal in the 44th minute was a gem finished from 20 metres out by the game’s outstanding player, Noel Callnan, who would finish the game with a personal tally of 1-3.

Limerick drew level for the first time at 1-9 apiece in the 56th minute to set up an exciting finale.

A Kevin Grogan point nudged Tipp ahead again almost immediately before Limerick substitute Niall McAuliffe who had just entered the fray levelled for the second time with a fine individual point two minutes from time.

But Limerick were definitely in the ascendancy as the game went into over-time and Noel Callnan almost snuck in around the Tipp defence but saw his effort pushed out for a 45. With the clock at 63 minutes and 40 seconds up stepped Limerick midfielder Jack Downey with the 45 which just about had enough legs on it to force a tap over from the Tipperary defence and the winning point.

Sean O’Connor had one last chance of redemption for Tipp with a difficult free out under the New Stand and into the Town End but it amounted to nothing and referee James Bermingham blew up for what was a greatly unexpected result scarcely a half an hour earlier.

After a promising start Tipperary led by 0-3 to 0-0 after seven minutes with an opening free from Sean O'Connor followed by two from play from Riain Quigley and Kevin Grogan.

A quick pair of points in reply for Limerick from Noel Callnan and excellent effort  from full-forward James Molyneaux had it back to the minimum before the Premier pushed on again.

Conal Kennedy was ruling the roost at midfield for Tipperary in a very impressive first half for him and a dominance around the middle was the platform for three points in a row for the home side.

After Eanna McBride was fouled Sean O'Connor slotted over the free and then two excellent points put Tipperary 0-6 to 0-2 up on the quarter hour mark. The first of these came from the aforementioned Kennedy - who got some action with the seniors in this year's National League - and the second from his Clonmel Commercials clubmate Sean O'Connor when he finished off a nice Tipperary move.

A John Hayes free in the 20th minute reduced the advantage to three but worryingly Noel Callnan burned the Tipp defence but put his effort narrowly wide of Kuba Beben's goal. It was a warning as to the potential of the lightning fast Limerick corner-forward.

A Jack Downey free for the visitors and another excellent point from Callnan had the game back to the minimum at 0-6 to 0-5 after 26 minutes before Tipperary finished the half well with points by Moyle Rovers' Riain Quigley, a free which he won himself, followed by a point from play following a bad kick-out by the Limerick keeper.

At three up at the break, many in the 697 attendance, felt that Tipp could have been further to the good with the amount of possession they had. Limerick on the other hand might have felt they too could have been on level terms at had Noel Callnan's goal effort, and two close-in frees been converted for points.

The 1-2 from Tipperary inside the opening three minutes of the second half stretched their advantage to eight and a semi-final place against the highly-fancied Kerry under 20s looked assured. Limerick had other ideas though.

A pair of John Hayes frees with a point from play from corner-forward James Cummins had gap back to five by the 42nd minute before Noel Callnan finally realised the damage he had been threatening all evening when in possession.

A move through the middle was carried forward by the St Kieran's clubman before unleashing an unstoppable shot from 20 metres to the roof of the net. At 1-10 to 1-8 it was game on again in the 44th minute.

When the Tipperary defence were turned over three minutes later Callnan once again punished Tipperary to make it a one point game, before a Riain Quigley free arrested the flow for the home side, their first score in 16 minutes.

The next two points went Limerick's way, after Karol Moloney was fouled John Hayes tacked on his third free of the evening and then James Molyneaux swivelled superbly to land an equaliser into the Killanan end with just three minutes remaining.

With the game in the melting pot now, it was Limerick who had the momentum and despite Kevin Grogan inching Tipp ahead once more Niall McAuliffe repaid the faith shown in him when converting his chance after just coming on the field as a late sub to tie it up again.

At the death Jack Downey stood up like a man and under pressure got every inch out of his 45 metre kick to secure a famous victory for the men in green who now travel to Tralee next Thursday night to face Kerry.

For Tipperary it was a very disappointing way to exit the championship and it left the management team with a lot to ponder after the final whistle. In both halves Tipperary had assumed superiority only to let the advantage slip, more so in the second period after going eight clear. No doubt Limerick made better use of their substitutes over the hour, having been forced to take off two defenders inside the opening 18 minutes due to injuries to Jack Fitzgerald and captain Cillian Ferris.

For Tipperary Riain Quigley was their best on the night, and without doubt their biggest scoring threat, while Kevin Grogan came in also with a pair of points from centre-forward. Conal Kennedy put in a mighty first half but was hampered in the second after taking a heavy knock to the shoulder in a late challenge. (He was to be black carded in the 60th minute). Jack Harney was excellent at full-back while Mark O'Meara and Eanna McBride also had their moments.

Noel Callnan was the star of the show for Limerick who also had good games from James Molyneaux,  Adam Shanagher,  Barry Coleman and Jack Downey. John Hayes took his pointed frees well after coming on as an early sub.