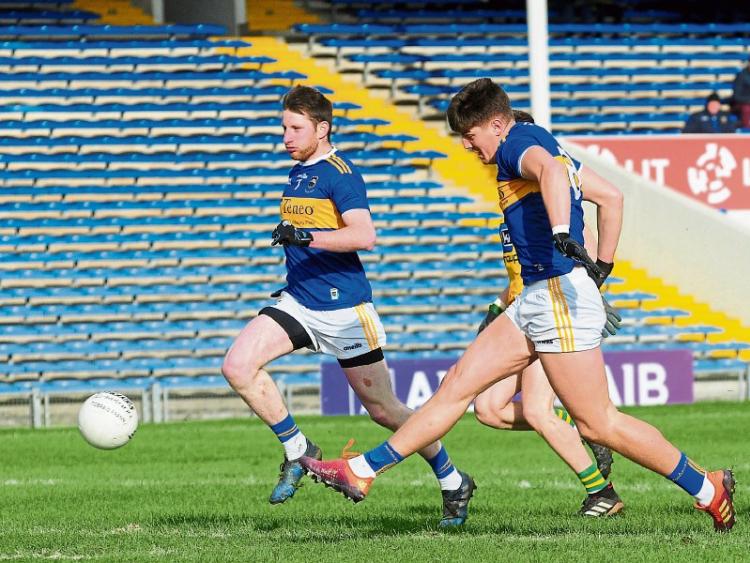 Steven O'Brien goals for Tipperary in their win against Donegal in the National Football League in Thurles. It was to be Tipp's only win from nine competitive senior games this year.

What now for Tipperary football?

Defeat for the Tipperary under 20 football team against Limerick in the Munster quarter-final at Semple Stadium, Thurles, on Tuesday evening brought the curtain down on what can, to put it mildly, be described as an annus horribilis for our inter-county teams.

Defeat at the first hurdle for the Tom McGlinchey managed side means elimination for the young footballers, the under 20 competition (formerly the under 21 grade) being the only competition that offers no second chance or back door.

Surrendering an eight points lead early in the second to lose to a converted 45 metre kick four minutes into time added-on summed up Tipp’s evening and in a way the year for the Premier County in football.

Tipp were well in control in the first half and led by 0-6 to 0-2 after 15 minutes and should have driven on then. And after a perfect start to the second half, thanks in no small part to a well-taken Riain Quigley goal, the home side found themselves eight points clear. Slowly they were reeled in by Limerick who would lead just once all evening, at the time when it mattered most. Midfielder Jack Downey’s winner, a converted 45, was the first time they had led all evening.

For the third time this championship summer a Tipperary team had failed to overcome Limerick - by no means a powerhouse in Munster football.

Tipperary seniors were shocked by the Treaty Men in their quarter-final clash also in Semple Stadium in May, whilst our minors could only draw with the Shannonsiders in the Round Robin Munster Championship group for weaker counties.

But the county’s disappointing performances stretched back way before the summer.

In their seven game National Football League campaign Tipperary managed to win just once, at home to Donegal. And following their seven points loss to Division 4 side Limerick in their first (and last) game in the provincial championship, Tipperary lost to Down in Newry in the Round 1 of the Qualifiers. With just one win from nine starts all year, team manager Liam Kearns called an end to his four-year tenure, after the defeat to the Mourne men in Newry.

It wasn’t much better for our minors in their campaign in Munster. An opening round win against Waterford at Sean Treacy Park in Tipperary proved to be their only victory. Matt Doherty’s side subsequently lost to Clare in Ennis before drawing with the Limerick minors in Tipperary Town. In the Daryl Darcy Cup final again against Clare in Limerick, Tipperary were well and truly second best. Clare in turn would go on to face Cork and Kerry in the next stage of the Munster championship.

And this all led to last night’s under 20 encounter and once again elimination at the first hurdle for a Tipperary football team.

It is a far cry from the success and joy county teams were achieving at all grades just a few short years ago - the All-Ireland minor win of 2011, the under 21 Munster success of 2015 where Tipp only lost out to Tyrone by a point in the All-Ireland final, and, let's not forget the unforgettable day in 2016 when our seniors played in an All-Ireland semi-final against Mayo. These were just some of those magic moments in that golden spell.

Tipperary appeared in three Munster under 21 finals in a row between 2013-15 (winning the latter to add to their only other provincial win at this grade in 2010) while the minors appeared in Munster finals in 2013 and 2015, reaching the All-Ireland final in 2015.

Under Peter Creedon and later Liam Kearns the senior team had some great days with championship wins against Cork, Galway, Derry, Cavan, to mention but a few, and they also recorded two Divisional Final wins in Croke Park against Clare and Louth, gaining promotion to Division 3 and Division 2 respectively in those years.

Those great advancements in football led some in officialdom to dream that Tipperary could rise to challenge for senior All-Ireland honours by 2020. That vision now it seems is anything but 20-20. Judging on this year’s showings it might be a little while again before we see days like these.

For now the club championship can once again take centre stage and provide a platform for all players in the county to rise to the standard necessary to play on inter-county teams at all grades. Of course, we also await with interest the appointment of a new senior manager to replace Liam Kearns. Whoever takes on that role will have a bit of catching up to do once again it seems.