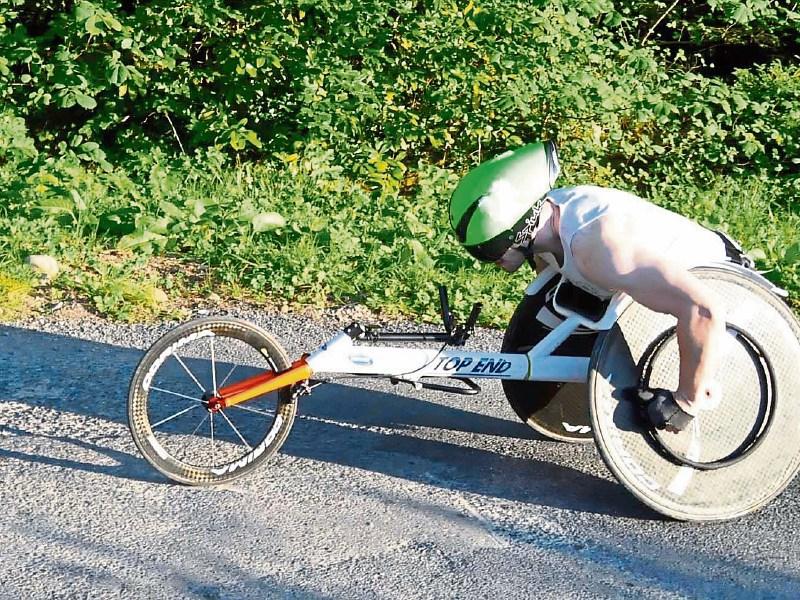 Cillian Dunne gave a master class handling of his three wheeled vehicle to complete the two laps in 28:20 minutes and in the process knock a whopping 14:18 minutes off the old record.

Last Wednesday night the 34th Coillte 10k road race took place in Dundrum. A field of 253 athletes went to the start line which included a disappointing entry quantity wise in the junior 5k and the newly introduced 2 by 5k relay. However on a good night for running the 10k did not disappoint with 238 athletes going into battle in which four records were broken across the various categories.

Former Irish International athlete Dominic Moore blew the whistle to set the field on their way Wheelchair racer Cillian Dunne, Borrisokane, made his first trip to Dundrum and as is customary for wheelchair racers he was given the 1 minute plus head start for safety reasons. Not that Cillian needed it as he gave a master class handling of his three wheeled vehicle powered only by his hands to complete the two laps in 28:20minutes and in the process knock a whopping 14:18 minutes off the old record.

The main field were off just over a minute after Cillian along with the juniors.

Previous winner David Mansfield Clonmel was quickly at the front of proceedings pushing the pace and stretching the field. Back into the village after one lap and he was out in front followed by UK based local club athlete Kevin Moore, Dundrum followed by Cillian O’Leary, Raheny Shamrocks who made the trip from the North Dublin club. Next we had John Shine Leevale and great supporter of this race Declan Moore, Bilboa.

Distance man David continued to drive on out the second lap and came home a convincing winner in a great time of 31:04 to become only the fourth man in the races 34 year history to win it more than once.

He also won the Tim Crowe trophy for been the first Tipperary athlete to cross the line presented to him afterwards by Dominic Moore who donated the trophy. Cillian got ahead of Kevin on the run in for second in a time of 31:21 with Kevin 3rd in 31:31 for his fastest trip over the course. Cork man John had a great run for 4th  in 31:43 while Limerick man Declan also broke the 32 minute barrier to finish 5th  in 31:58.

The age categories were once again intensively fought for with two records broken. Derek Walsh, Carrick-on- Suir won first Over 40 in 33:56 from Danny Smith Burncourt in 35:04. Brian Carroll Clonmel was 1st  Over 45 in 37:29 from Fran McElligott,  Tralee Triathlon Club in 38:41.

The ever consistent Michael Moore from the local club was 1st  over 55 in 42:50.

John Collins, Leevale and James O’Sullivan, Tipperary Town  set new course records on the night when winning the Over 60 39:38 and Over 65 40:31 respectively.

The junior race over 5k saw a disappointing entry won by Nathan Bowe Moyne in 19:32.

The women’s race again had great quality up front with Irish International Siobhan O’Doherty, Borrisokane making her annual trip to Dundrum to record a incredible twelfth victory in the race in a time of 36:49. A record her late father Eamon would be proud of as he and his wife Agnes were with Siobhan on many of her wins in Dundrum.  The evergreen Angela McCann Clonmel defied the years for a great run for second in 37:36 she was followed by local club athlete Dymphna Ryan with a good run for third in 37:52. Madeleine Loughnane of  Thurles Crokes had a excellent run for 4th in 39:16 with Dymphna sister Rosemary Ryan and course record holder 5th in 40:10.

Great running by the five girls with the first three under 38 minutes.

A disappointing entry in the junior 5k race had a win for Orla Ryan, Dundrum in 21:54.

There was also a small turnout in the relay race where no men’s team entered had a easy win for the Fogarty girls from Moyne, Angela and Louise in a time of 39:40.

Regular visitor to Dundrum Mary O’Brien Recreation Officer of the main sponsors Coillte presented the prizes to all winners on the night.