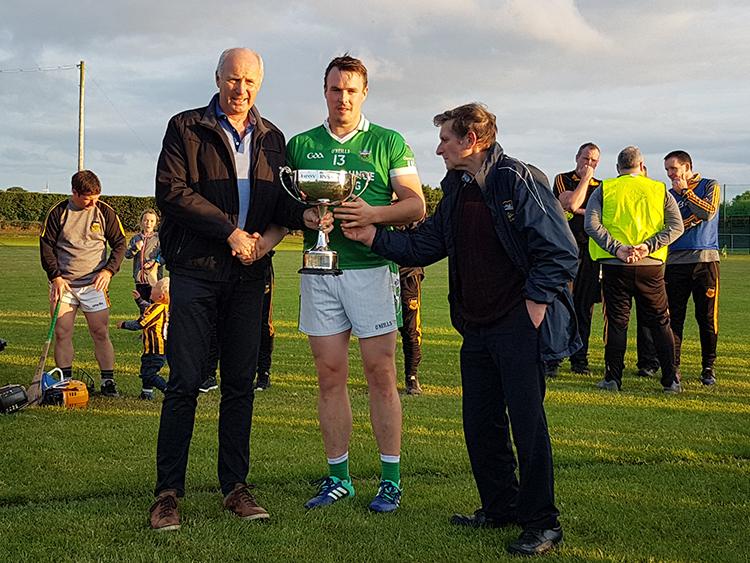 Although this contest probably lacked the ferocious edge that you would normally associate with clashes between such Mid Tipperary rivals this was an entertaining contest for the most part while man of the match Johnny Ryan treated us to an absolute exhibition of long-range marksmanship. Paul Shanahan and David Collins certainly had their moments in this clash, but Johnny Ryan was the outstanding performer on the night when firing over five points from play.

Upperchurch-Drombane trailed by three points (0-10 to 2-7) at the interval, but playing with the aid of the breeze in the second half John Ryan’s men appeared well-positioned to take the honours when Jack Butler fired the Church into the lead (0-15 to 2-8) in the 41st minute. Drom & Inch, however, finished the stronger when dominating the final quarter to the tune of four points (1-5 to 0-4).

Full-forward Michael Campion battled gamely in the opening minute before setting up Michael Connors for a goal; Johnny Ryan then added three points (two frees) to his side’s tally and Drom & Inch led 1-3 to 0-1 with seven on the clock.

Paul Shanahan was making a big impact in the Upperchurch-Drombane half-forward line and following scores from Shanahan, Pádraig Greene (free), Loughlin Ryan and Colm Stapleton there was just point between them (1-3 to 0-5).

The sides then traded efforts before Drom & Inch struck for a goal which spoke volumes for the coaching of the side - Liam Ryan made an enterprising run into space deep inside the Upperchurch-Drombane half and Lorcan Campion picked out the midfielder with a terrific forty-metre stick pass; Ryan then applied the finish in the 17th minute (2-4 to 0-6).

Upperchurch-Drombane responded well with three successive points (Pat Shortt, Pádraig Greene & Paul Shanahan) before Johnny Ryan drilled over two long-range points in the 24th and 25th minutes - one of which was delivered from well inside his own 65-yard line.

Efforts from Jack Butler and Michael Connors closed out the first half scoring (2-7 to 0-10).

Upperchurch-Drombane out-scored their opponents 0-4 to 0-1 during the opening nine minutes of the second half and tied the game (0-14 to 2-8). Pat Shortt notched one of these efforts while Pádraig Greene converted three placed balls - Drom & Inch had, by now, conceded thirteen frees (Upperchurch-Drombane: three).

In the 41st minute Jack Butler forced Upperchurch-Drombane into the lead for the first time, but Johnny Ryan (free) hit back soon after before Drom & Inch happened upon the contest’s key score in the 43rd: Joe Lupton’s effort at a point dropped short and team captain David Butler somehow managed to break the dropping ball into the back of Ciarán Shortt’s net (3-9 to 0-15).

There were still three points between them in the 46th minute when Johnny Ryan landed a ridiculous long-range point from just inside his own half, under pressure and in the shadow of the stand to force Drom & Inch four clear and although Pádraig Greene responded with a converted free Upperchurch-Drombane did not feature a goal threat which may have rescued the situation. Indeed, this final petered out to an inevitable conclusion as Upperchurch-Drombane launched a series of searching deliveries into the Drom & Inch goalmouth which a gritty David Collins gobbled up.