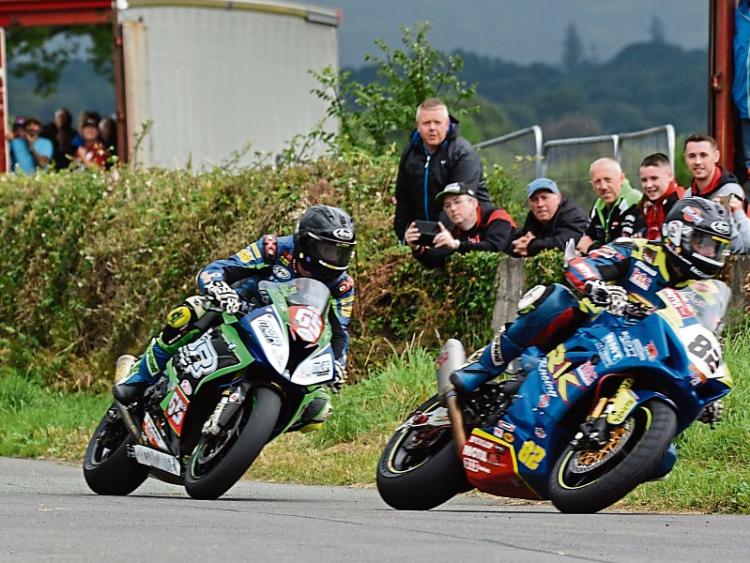 The rural roads around Faugheen village became the centre of the motorcycle racing world at the weekend as 70 of the sports top competitors vyed for honours in the Faugheen 50 Road Races.

The annual races run by the Faugheen 50 Motorcycle Club attracted racers from all over Ireland, Northern Ireland, Britain and even as far as Switzerland.

Hundreds of spectators watched the motorcycle racing over the 2.3mile circuit, which began at 12 noon last Saturday with practice and qualifying races for all classes and concluded on Sunday afternoon.

Faugheen 50 Motorcycle Club Secretary Maeve Walsh said they were delighted with the crowds that turned out to view the racing, particularly on Sunday and the competitors and spectators were lucky the rain held off until after the races. The roads re- opened to traffic  at 2.40pm on Sunday with the presentations finished at 3.30pm just before the rain arrived.

Before the racing began on Sunday, a minute’s silence was observed by competitors and spectators in memory of the late Darren Keys, who tragically lost his life racing at Walderstown in Co. Westmeath the previous weekend.

The top three riders of the meet Derek Sheils, Micko Sweeney and Derek McGee were locked in battle in the grand final.

McGee was in front on lap three, with less than 0.5 of a second separating the trio. McGee led as they approached the village on the last lap, but Sheils went the long way around and surprised McGee with this manoeuvre and the Dubliner held on to win by 0.329 of a second, and Sweeney taking third 0.672 of a second in third.

McGee won  the Man of the Meeting award, with Sheils recording the fastest lap of the meeting at 105.164mph.

He was also the fastest Republic of Ireland rider of the meeting.

Richard Ford was the Fastest Classic rider, with Swiss visitor Tommy Felder taking the furthest travelled rider prize. He travelled from Switzerland on a 1934 Sunbeam bike

There was a special award in memory of a great club member Caroline Hearne, who passed away suddenly recently. It was called theAgainst all the Odds award and  was presented by her family to Rush barber Vinny Brennan.

Local motorbike racing fans cheered on Martin Curram of the Faugheen 50 Club, who competed in the meet.