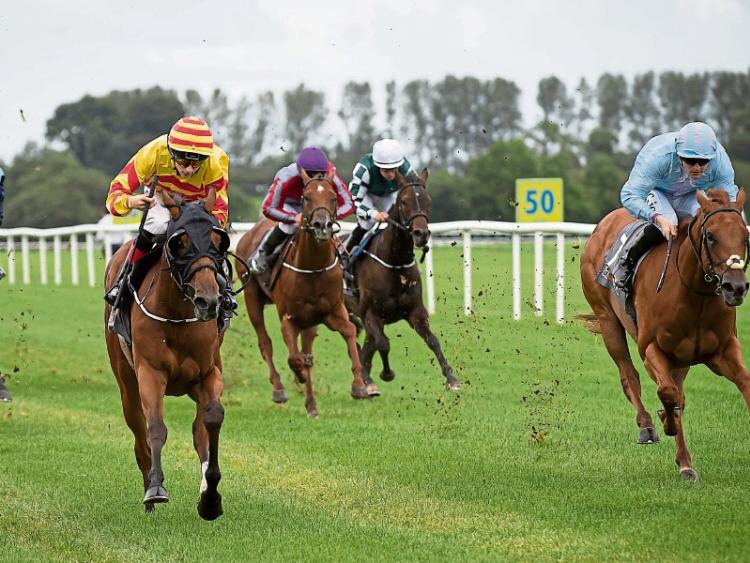 The leading rider at the Galway festival, Donnacha O'Brien kept up the good work at Naas on Bank Holiday Monday where he partnered Harpocrates to win the 6f conditions’ race for his father Aidan.

The 11/4 chance had plenty in hand in beating the Jim Bolger-trained Geometrical by half a length.

Killenaule apprentice Gavin Ryan rode the 26th winner of his career when taking the 10f apprentice handicap on the Jim Bolger-trained Cuban Surfer.

The well-backed 9/4 favourite beat his stable companion National Identity to the post, winning by all of four lengths. Ryan rounded off the week with a winner at the Curragh where he landed the 8f handicap on the Bolger-trained Solar Wave which came from well off the pace to deny Trading Point by a head.

Nenagh trainer Ray Hackett won the 2m3f handicap hurdle at Cork on Bank Holiday Monday with Nibblers Charm. Sent off an 11/1 chance under Donie McInerney, the six-year-old possibly won with a little more in hand than the three parts of a length winning margin might suggest.

Hereia landed the first three-year-old hurdle of the season for Andy Slattery and Danny Mullins at Roscommon on Tuesday.

The 14/1 chance made all the running to beat the strong 15/8 favourite Harvest Bow, trained by Noel Meade. Slattery’s son and namesake rode a welcome winner at Sligo the following afternoon where he was successful on the Dermot Weld-trained Kastasa in the Connacht Oaks Handicap. The young apprentice had been on the sidelines for two weeks with a minor injury.

Aidan O'Brien teamed up with his old ally Seamie Heffernan to win the opening 8f maiden at Leopardstown on Thursday night. While the champion trainer also ran 8/13 favourite Mythical in the race, he struck with 7/2 chance Cormorant which got up in the dying strides to pip the Jim Bolger-trained Agitare.

Donnacha O'Brien rode a double at the meeting and he partnered Latrobe to his first success since his Irish Derby triumph last year in the Group 3 Grenke Finance Ballyroan Stakes. Trained by the winning rider’s brother Joseph, the 9/10 favourite was in the first two throughout and stayed out of trouble, gradually getting the better of the argument in beating Guaranteed by three-parts-of-a-length.

Targets were not specified, but a tilt at the Melbourne Cup later in the year would not be a surprising development. O’Brien later teamed up with his father Aidan to win the 13f maiden with 11/10 favourite Quote.

Partnered by in-form rider Gary Carroll, the 16/1 shot led inside the final furlong and kept on well in a battle of three-year-olds to hold off the filly Woody Creek by a neck. It means that Murphy has sent out a Group 3 winner, a Listed winner and a Premier Handicap winner from nine winners this season.

Borisoleigh jockey Trevor Ryan rode a winner for Michael Hourigan at Kilbeggan on Saturday night where Finding Joy took the 2m4f handicap hurdle. The 20/1 chance finished with a flourish to beat Myladyrose by half a length.

There was local joy for Golden trainer Fozzy Stack at Tipperary on Sunday as Piece Of Paradise got off the mark at the third attempt in the opening 5f maiden. Under Killenaule apprentice Andrew Slattery, the 6/1 chance was never far off the pace and stayed on best in testing conditions to beat the Joseph O'Brien-trained Lady Penelope by a length.

Hathiq bounced back to form with a snug success in the 5f handicap for Denis Hogan and Rory Cleary. The 9/2 shot didn’t enjoy the clearest of runs at the furlong pole but once he found a gap he easily accounted for 9/4 favourite Tide Of Time.

The winner holds an entry in the Group 1 Derrinstown Stud Flying Five Stakes but may run in a listed race back at Tipperary before taking up that option. David Marnane and Oisin Orr combined to win the 7f handicap with Cracking Name which was scoring over the course and distance for the third time. Owned by the Cracking Name Syndicate, the 7/1 chance beat the Damian English-trained Tribal Path by two and a quarter lengths.

John Ryan won the 2m6f maiden hurdle with the Hugh Morgan-ridden Summer Hill at Downpatrick on Sunday afternoon. The 13/8 chance scored a 17-length win less than 24 hours after running out in a race at Kilbeggan.