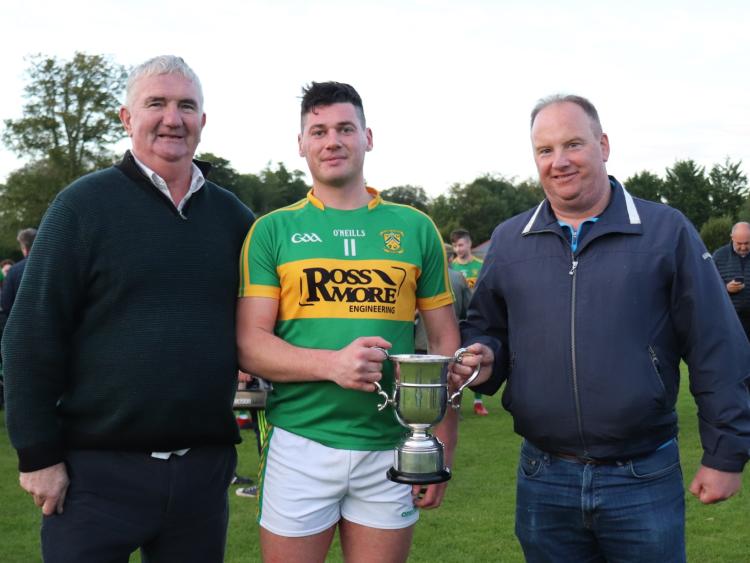 Clonoulty-Rossmore claimed their fourth Gleeson Concrete West Tipperary Junior A Hurling Championship title in-a-row when they saw off a gallant Arravale Rovers in Dundrum on Saturday evening. In what was an enjoyable game of hurling a late surge of points from Clonoulty put a small bit of light between the sides late in the game turning the tide in Clonoulty’s favour though Arravale, to their credit, fought right to the end.

Jack Ryan, who would finish as Clonoulty-Rossmore’s top scorer, opened the scoring in the second minute with a point from play. Jack Ryan had Clonoulty 0-2 to 0-1 up in the sixth minute with his second point from play. Arravale started to get on top at this stage and the next three minutes yielded 1-3 for them. James Hogan, Mikey O’Dwyer and Donagh Leahy all got on the score sheet before Johnny Lowry grabbed the game’s opening goal - Lowry pulled on the sliotar first time after David Egan had saved Cormac Maher’s shot.

Aaron Ryan and Tom Butler added Clonoulty-Rossmore’s third and fourth point from play to leave just the goal between the sides after twelve minutes. Despite Jack Ryan finishing with 0-10 from placed balls the first score from a free only arrived at the start of the second quarter. The game played out between two and three points for most of the second quarter with Mikey O’Dwyer (play) and Jack Ryan (frees) to the fore on the scoring charts. Mikey O’Dwyer’s first in this quarter showed real determination as he fought his way past several defenders before pointing. Aaron Ryan and Mikey O’Dwyer swapped points just before half-time to see just the minimum between the sides at the break (1-8 to 0-11).

Jack Ryan pointed three further frees in the opening ten minutes of the second half to edge the defending champions in front. Donagh Leahy got Arravale off the mark in the second half with a point from play after eleven minutes and that was quickly followed by an effort from Darren Lowry who had made a move from the half back line to level the game. But Sean Maher and James Hammersley quickly restored Clonoulty-Rossmore’s two-point advantage.

Mikey O’Dwyer pointed two frees either side of a Jack Ryan free and the game was nicely poised with eleven minutes to go. James Hammersley was getting onto more possession and added two in quick succession before Jack Ryan added his third point from play.

This was the first time Clonoulty-Rossmore had lead by four points in the game.

Both sides were now guilty of missing chances, but Ger Halligan responded with a point for Arravale. With the clock ticking down Mikey O’Dwyer (play and free) pointed either side of another Sean Maher point to cut the deficit to two.

Both sides tried to get an edge in the final few minutes. Arravale Rovers could have had a second goal when Cormac Maher was one-on-one with David Egan, but the latter produced a good save. Clonoulty-Rossmore too could have had a goal, but for a great save by Thomas Gleeson from James Hammersley. Jack Ryan though would have the last say in the game and he added two more frees either side of a Ger Halligan point.

Afterwards Michael Ryan, the chairman of the West Tipperary GAA Board presented the trophy to Clonoulty-Rossmore captain Aaron Ryan in the presence of Micheal Gleeson (representing competition sponsors Gleeson Concrete).

This was a close game through out, but Clonoulty-Rossmore were just that bit sharper during the last ten minutes. They had strong performances from Paudi Carew and Sean O’Connor in defence. Their half-forward line finished with 0-8 from play while Jack Ryan finished with a final total of 0-13. His performance from placed balls was a real asset to Clonoulty-Rossmore’s victory. Tom Butler added experience while James Hammersley eventually got space late on to finish with 0-3.

Arravale Rovers fought right to the end. They were best served by Richie Lohan, Niall Fitzgerald and Darren Lowry in defence. Mikey O’Dwyer finished with eight points (five from play from midfield) and he was a constant threat. Johnny Ryan got on a lot of possession in midfield and his pace caused Clonoulty-Rossmore problems. James Hogan was playing well before being withdrawn at half-time due to injury while Donagh Leahy was strong at full-forward finishing with 0-2.