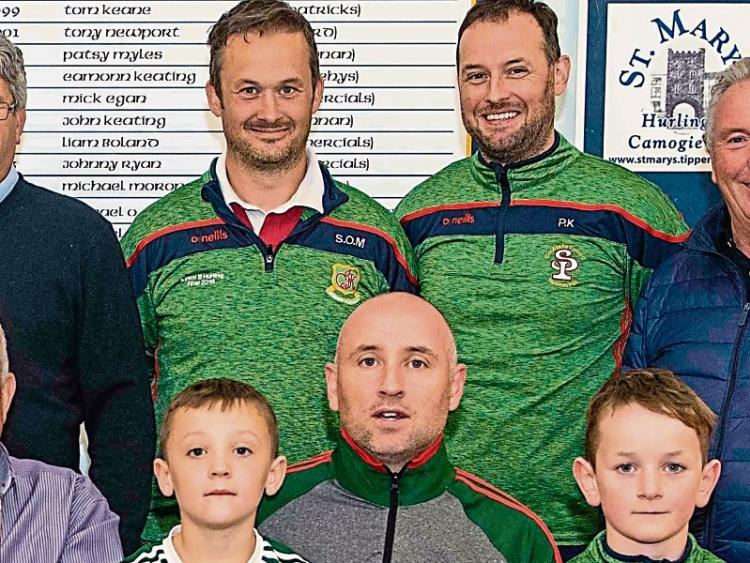 At the launch of the South Tipperary Senior Hurling Final at the GAA Centre in Clonmel were: Back Sean O'Meara and Paul Kelly. Front Eoin Kelly (captain) with young Conal Kelly and Jack O'Meara.

The Clonmel Oil South Senior Hurling Championship between Carrick Swans and Mullinahone goes ahead this Sunday at Clonmel Sportsfield at 5 pm.

For both sides, now operating at Roinn II in senior hurling, Sunday’s decider will not alone give them a chance of silverware but will also open up a chance at this year’s Dan Breen Cup, with a preliminary quarter-final guaranteed for the victors.

Winning the South title is still a big deal and a proud honour for all five clubs competing at senior grade in the Division (Swan, Mullinahone, Killenaule, Ballingarry and St. Mary’s).

“Tis a huge occasion. South finals are a big deal for us and always have been. We are only up to senior since 1992.  We won our first South in 1993 and we have had some great success since with some fantastic players.

“The last two years have been tough on us. We have lost a lot of players a lot of the 2002 county final winning team have come to the end of their time. We have only got two left and they are two fantastic servants in Eoin Kelly (the captain) and Paul Curran and Paul Kelly is still doing a job for us he played again tonight (v Skeheenarinky) for the juniors but after tonight is carrying an injury and is a doubt now for the final.

“In the semi-final we took a big loss in Jack Shelly who has probably been our best player all year so far when he broke his collar bone in two places, so he is gone and that is a huge loss for us" added the Mullinahone manager.

I asked Sean how did he rate his side’s chances against an improving Carrick Swans side in Sunday’s final.

“We are the underdogs. We do have a good chance but we are underdogs and we know that. They won the championship two years ago. Swans put in a super performance in the semi-final here against Killenaule when they went seven or eight points down in the first half and came back to win. They are a really decent side and we know we have it all to do.

"But we are in a good place. We are physically ready,” added Sean who was a member of the Mullinahone panel himself when they first went senior in 1992.

I put it to him that like the Swans, Mullinahone are going through somewhat of a transition period at the moment having lost their Roinn I status last year and a couple of players having retired over recent years.

Sean went on to add:

“Niall Curran has given us great service and has transferred to Silvermines, he is living up there now. AJ Cronin has moved on as well and a couple of other lads have stopped playing.

"We re-grouped. We took a risk at the start of the year by coming up from Junior B to Junior A with our second team to see if we could improve the standard," continued Sean.

“We have a panel of 40 lads training now which is fantastic, the biggest we ever had, to the point that if we can keep building we hope that we can put out three teams. At the moment we have two teams and they are both being competitive."

Sean acknowledged the great effort that is being made, both on and off the field, back in the parish.

“There is a lot of good work going on with our juveniles over the last few years and we are getting a lot of good work out of our seniors. They are double-jobbing for us in the sense that Kevin Walzer is playing and he is the vice-chairman, Paul Kelly is the treasurer and is still playing. A lot of the juvenile teams have a player coaching with them. There is a big bond and it is really coming together for us.

SIX MILES FROM ONE END OF THE PARISH TO THE OTHER

“It is badly needed in a place like Mullinahone because we need everyone and if we don’t have everyone pulling together we are in trouble because the reality is that it is six miles from one end of the parish to the other and that’s it. It is not that big a place. People think that because of the success that we’ve had over the last 25 to 30 years that we are a massive club. We are not a massive club. We were struggling junior for a long number of years and John Leahy, in fairness, dragged us out of junior on his own and led us to a great day in ‘02. We would love to get back to there but we are a long way from that.

Finally, I asked Sean what he felt they needed to do to overcome the Swans on Sunday next at the Sportfield.

“For us to beat the Swan we need everything to go right. We need every ball to stick, every puck-out to win, every break to go our way. We know that a little bit below par they could still beat us but if we get everything right and a little bit of luck goes our way then we will be there or thereabouts. And if we can be there or thereabouts in the last few minutes we will be happy, we’ll be happy,” concluded the Mullinahone manager.