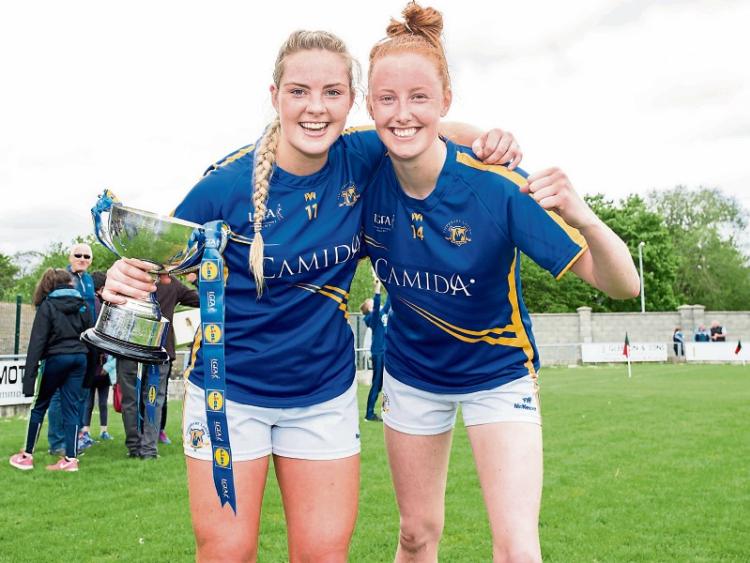 Spare a thought for the Meath defence  when they check out the Tipperary team for Sunday's All Ireland intermediate final  in Croke Park.

Not only will they see the name of one brilliant footballer from Cahir called Aisling  - but two!

The two Aislings, McCarthy and Moloney, are part of the heartbeat of Tipperary ladies football and they will play a crucial role if Tipp can win their second title in three years.

They jokingly refer to themselves as veterans on the team at the ripe old age of 23 and 21 respectively.

But they are certainly veterans in terms of experience, know-how and a football brain that has seen the game in the county reach such heights in recent years.

And Aisling McCarthy brings  something extra to the table this year with experience playing professional football in Australia. She has learned a lot from her time 'down under', including how to handle gym work and diet, and that has helped her overall game.

Now she is thrilled that she worked her way back onto the Tipperary team following her time away and that the side are back in another All Ireland final.

That Tipperary jersey – and her club one in Cahir – mean everything to her.

She would never leave either and that's something her team mates in Oz didn't understand.

“Girls over there didn't realise that I played for the same team all my life - for Cahir and Tipperary. It's something special and that was absent from the team in Australia. If an opportunity comes with another team they can move on”, she points out.

Now that she's back how will she approach another huge day in Croke Park?

“We will approach it in a relaxed manner. We saw Jack McCaffrey for Dublin with a massive grin on his face in the parade before the All Ireland final.  It shows how important it is to enjoy it as it might be your last time in Croke Park.

“That's what we are telling the younger players,  to got out and enjoy and cherish it. It is a day to express yourself on a massive pitch and we have  young players who are full of running”

Aisling plans to head back to Australia  for another year. “The opportunity came up late last year and came on me pretty quickly and by the time I got out I missed a couple of weeks pre-season and I didn't get selected for round one of the championship.

“I'm going to go back and be more prepared this time. It's something I really enjoyed and want to pursue but my focus now is on Tipperary football”, she says.

Her clubmate Aisling Moloney is a scoring machine for Tipperary, one of the most complete footballers in the game who can swing a match in her side's favour with her brilliance.

But her modesty matches her ability and deflects any undue attention away from herself.

She says - “We are going to enjoy the game as we don't know when we will get there again.

“We will  soak it up as we grew up dreaming of  these things. It's a huge privilege for all of us”.

Like the Tipperary senior and under 20 hurlers, the ladies footballers have become role models for young girls across the county and they are conscious of getting the message across to youngsters about how important it is to be involved in sport and physical activity.

Moloney agrees that it's important for girls to play sport.

“Mental awareness is important as there are more pressures today on younger people, different pressures from years ago.

“And sport gets you away from that and it's important to be involved.

“It's acceped now that women are more involved in sport because in the past some  people might have said that boxer Katie Taylor was involved  in a man's sport”.

The respect the players are held in was evident at a recent meet and greet training session before the final.

“At  previous training sessions we might have had  50  at it but  last week we had 200. The game is making a massive impact on young girls in the county”, says Moloney.

Just 21, she has already made a huge impact on the game at club, county and colleges level and is aware of the responsibility she carries for younger players.

“Some players are young and the senior members have roles to play. I'm only 21 and feel like forty on the team.

“But there are young players coming through and it is up to us to guide them on the pitch.

“It was a huge occasion in the first final in2017 but this time I am more relaxed. The young players don't care who they come up against as they have no fear”, she says.

Two of those younger players are Aherlow sisters Caitlin and Anna Rose Kennedy.

At seventeen, Caitlin is the younger of the sisters and did her Leaving Cert this year but is now an established panel member.

Eighteen year Anna Rose has been involved for two years and was part of the set-up in 2017.

She pays tribute to the role of Aisling McCarthy, Aisling Moloney and team captain Samantha Fox in helping the younger players settle in.

“They are the very best group and I look to them as my role models”.

And how does she feel aobut Sunday?

“I'm a little nervous but more  relaxed this time with two years experience.

“We get on really well together and it's great for Caitlin and I  to have a  sister beside you on the team”.