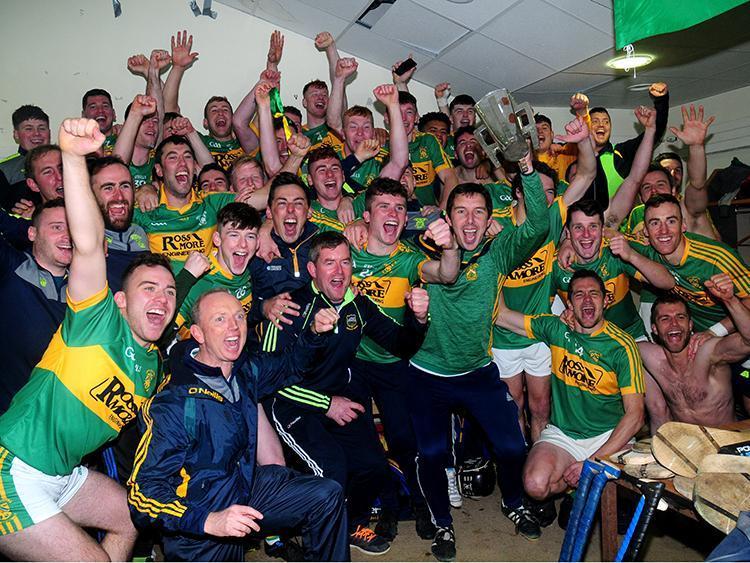 It's serious business from here on out as all of the contenders in the FBD Insurance-sponsored county senior hurling championship, the Séamus Ó Riain Cup and the county intermediate hurling championship prepare to hit top gear in the quarter-finals of their respective competitions.

The quarter-finals in the FBD Insurance County Senior Hurling Championship take centre stage this forthcoming weekend. And, the draw has presented us with four tantalising contests.

On Saturday, October 12 Toomevara take on Kiladangan at MacDonagh Park in Cloughjordan (1.45pm) while The Ragg will host the meeting of Nenagh Éire Óg and Éire Óg Annacarty-Donohill at 4pm. Then on Sunday, October 13 neighbours Borris-Ileigh face Drom & Inch at Holycross (1.30pm) while defending champions Clonoulty-Rossmore will hope to book their place in the last four when facing Kilruane MacDonagh's at Templetuohy (4pm).

Two preliminary quarter-finals took place on Sunday in the FBD Insurance County Senior Hurling Championship and both went to extra-time: in the end Toomevara edged out Mullinahone (1-24 to 2-19) and Clonoulty-Rossmore beat Loughmore-Castleiney in a thriller at Littleton (1-33 to 3-22).

Toomevara have already encountered Kiladangan in this season's North championship and although they lost out on that occasion (1-12 to 1-17) the Greyhounds will take great heart from their county championship group stage wins over Moycarkey-Borris (2-19 to 1-18) and, especially, Clonoulty-Rossmore (1-18 to 0-19). Toome did, however, also lose to Borris-Ileigh (1-15 to 3-18) which suggests that they have some ground to make up in order to really unsettle their opponents on Saturday. Meanwhile Kiladangan have been in top form this season. Brian Lawlor's men have already accounted for Drom & Inch (2-23 to 0-20), Portroe (7-21 to 2-17) and Roscrea (2-18 to 0-16) en route to a quarter-final which they will be expected to win. Kiladangan are 2/1 favourites to win the Dan Breen Cup and that's not by accident.

The meeting of Nenagh Éire Óg and Éire Óg Annacarty-Donohill is a novel one and although Éire Óg Annacarty lost the West final after a replay to Clonoulty-Rossmore the side coached by John Tuohy registered terrific county championship wins over Thurles Sarsfields (0-24 to 0-15) and Killenaule (0-17 to 0-13). Annacarty did lose their final group game against Kilruane MacDonagh's (2-15 to 2-19), but Éire Óg were already assured of their place in the quarter-finals by that juncture. Nenagh Éire Óg, last year's beaten county finalists, limped out of the North championship when losing to Burgess (0-11 to 0-14), but the Blues did account for Upperchurch-Drombane (2-21 to 1-15) and Burgess (2-23 to 2-17) during the group stage of the county championship while Nenagh also drew with Loughmore-Castleiney (0-20 to 1-17). The contest between Éire Óg Annacarty-Donohill and Nenagh Éire Óg is hard to call and you can be sure that both sides will have their eye fully trained on a place in the semi-finals.

Sunday's meeting between Borris-Ileigh and Drom & Inch has the potential to be an absolute cracker. Drom & Inch are on a high having already won the Mid senior title, county division one and division three crowns and also the county minor A hurling title most recently. During the group stage of the county championship Drom & Inch recovered from an opening day loss to Kiladangan (0-20 to 2-23) to draw with Roscrea (2-15 to 1-18) and then beat Portroe comprehensively (2-26 to 1-12). Indeed, it may well prove to be the case that Drom & Inch have hit top form at an ideal time of the season. But the Mid champions should not discount a Borris-Ileigh team who must be hurting after a disappointing display in the North final. Borris-Ileigh booked their place in the quarter-finals courtesy of group stage wins over Clonoulty-Rossmore (1-18 to 1-15) and Toomevara (3-18 to 1-15). In the third round Borris-Ileigh fielded a weakened side and lost to Moycarkey-Borris (1-16 to 1-19), but Johnny Kelly's men knew at that stage that top spot in group two was already sewn up.

Templetuohy hosts the most eye-catching game of the weekend when defending champions Clonoulty-Rossmore put their title on the line against Kilruane MacDonagh's who are many observers' fancy to land the Dan Breen Cup. Kilruane have already accounted for Killenaule (2-17 to 1-18), Thurles Sarsfields (2-24 to 0-18) and Éire Óg Annacarty (2-19 to 2-15) and although MacDonagh's lost out to Kiladangan (2-16 to 1-22) in the North championship Liam O'Shea's men did not seem too put out by that result. And, Kilruane enjoy a huge oppportunity to test their county title credentials on Sunday when they face a Clonoulty-Rossmore side who simply refuse to surrender the Dan Breen Cup without a fight. Clonoulty-Rossmore beat Éire Óg Annacarty in a replayed West final to keep their county title ambitions alive. And, although Clonoulty-Rossmore lost out to Borris-Ileigh (1-15 to 1-18) and Toomevara (0-19 to 1-18) during the group stage of the county championship their most recent preliminary quarter-final win over Loughmore-Castleiney after extra-time (1-33 to 3-22) will give them a huge boost.

Two matches took take place on Sunday to determine which two sides would make the drop to the Séamus Ó Riain Cup (Roinn II of the FBD Insurance County Senior Hurling Championship) in time for the 2020 season: Burgess survived when they beat rivals Portroe (1-18 to 1-16) at Dolla while Moycarkey-Borris comfortably won their clash with Killenaule at Templetuohy (3-19 to 2-16).

On Sunday in Cahir Holycross-Ballycahill just about got the better of Carrick Swans in the quarter-finals of the FBD Insurance Séamus Ó Riain Cup (0-19 to 0-16). Meanwhile last week Mullinahone beat Silvermines by a point (1-23 to 2-19) in their respective last eight clash - please note that both finalists in the competition will be promoted to Roinn I of the FBD Insurance County Senior Hurling Championship in time for the 2020 season.

So, two quarter-finals remain to the played in the 2019 Séamus Ó Riain Cup. And, both are scheduled to take place on Saturday, October 12: JK Bracken's face Ballingarry in Littleton (3pm) while the Templederry Kenyons take on Cashel King Cormacs in Drombane (3pm).

Also, it's hard to look past Templederry Kenyons in their respective clash with Cashel King Cormacs. Templederry have already beaten Carrick Swans (1-19 to 1-14), Lorrha-Dorrha (6-13 to 1-21) and Thurles Sarsfields (5-16 to 0-14) while Cashel overcame an opening day defeat suffered at the hands of Clonakenny (0-16 to 1-19) to draw with JK Bracken's (2-21 to 1-24); that result set the King Cormacs up for a winner-takes-all clash with St Mary's Clonmel and Cashel duly progressed courtesy of a 1-18 to 1-14 win over the South men.

The draw for the quarter-finals of the FBD Insurance County Intermediate Hurling Championship has been made and all four games take place this forthcoming weekend.

The results of the preliminary quarter-finals in the FBD Insurance County Intermediate Hurling Championship were as follows: Kilsheelan-Kilcash beat Ballybacon-Grange (2-10 to 0-7), Seán Treacy’s got the better of Moyne-Templetuohy (0-21 to 1-15), Golden-Kilfeacle dismissed the challenge of Moneygall (4-10 to 2-12) and Shannon Rovers beat Borrisokane (3-9 to 1-13).

The draw was also made for the FBD Insurance County Intermediate Hurling Championship relegation play-offs. A quarter-final will take place on Saturday, October 12 when Ballinahinch take on Lattin-Cullen Gaels in Kilcommon (4pm). The loser of that contes will progress to a relegation play-off semi-final against Ballybacon-Grange while Gortnahoe-Glengoole and Galtee Rovers meet in their respective semi-final.

The FBD Insurance County Junior B Hurling Championship semi-finals get underway this weekend when Cappawhite hosts the meeting of Borrisokane and Ballybacon-Grange on Saturday, October 12 (3pm). The other semi-final between Drom & Inch and Golden-Kilfeacle is scheduled to take place on the week-ending Sunday, October 20.

COUNTY MINOR A & B HURLING FINALS

Both of the FBD Insurance county minor A and B hurling finals took place on Saturday.

Meanwhile Drom & Inch enjoyed a fifteen-point win over Kiladangan (1-22 to 1-7) in the prestigious FBD Insurance County Minor A Hurling Championship final. In the semi-finals Kiladangan saw off the challenge of Mullinahone (1-20 to 1-12) while Drom & Inch hit five goals against Knockavilla Kickhams (5-11 to 1-16).