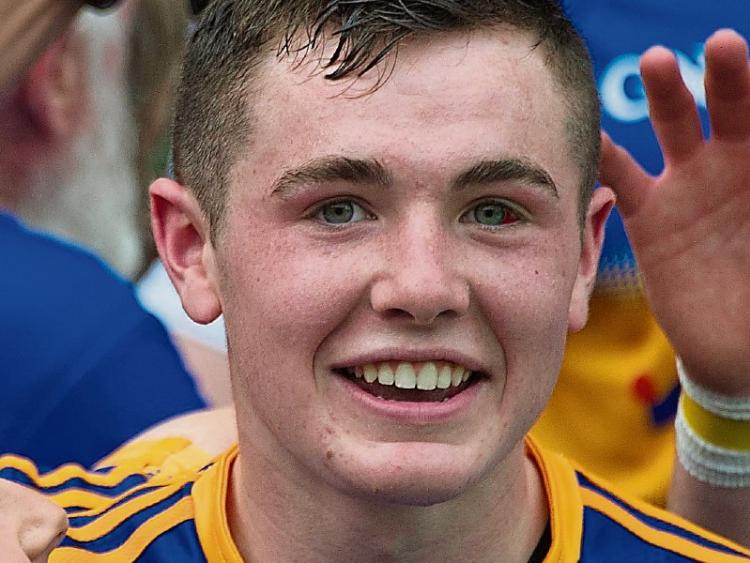 Paddy Cadell was in brilliant form for JK Brackens at centreback

JK Brackens won in a canter, powering home with a fifteen point winning margin against a Ballingarry side that couldn't match their pace and stickwork, but the scoreline only tells half the story.

The game began in a torrential downpour and with players on both side struggling in the appalling conditions, the first score didn't arrive until the 8th minute when a Lydon Fairbrother free put Brackens ahead with Michael Ivors from a free levelling for Ballingarry within a minute.

With Paddy Cadell imperious in defence and Fairbrother in scintillating form upfront, the Mid side had gone into a 1-8 to 0-5 lead at the break.

The goal was good enough to grace any game, Cadell storming through from defence, off-loading to Shane Scully who fed Fairbrother to blast to the net past David Cashin.

The game was over as a contest eight minutes into the second half after Brackens scored seven points without reply.

And with Brackens thirteen points ahead, 1-15 to to 0-5 and the competitive element of the game gone, it was a surprise to witness what followed. A serious niggle developed that not just got the players fired up but some of those in the stand as well as referee Conor Doyle struggled to maintain control.

First to get his marching orders midway through the half was Ballingarry's Padraig Hayes for an off-the-ball incident seen by Doyle.

But that did nothing to cool passions and within minutes a free-for-all developed around midfield with up twenty players involved in a series of skirmishes.

When order was restored Doyle singled out Brackens' Fairbrother and Ballingarry's Adrian Cleere for red cards.

It was a case of hero turned villain for Fairbrother who had scored 1-10 before his dismissal.

The score was 1-15 to 1-6 at the time of the double dismissal – the Ballingarry goal from Michael Ivors - but the remainder of the game was mere shooting practice for the Templemore side, outscoring the South side by eight points to two with Shane Bourke in sparkling form with three of the points.

It copper-fastened a thoroughly deserved win for JK Brackens who hurled with much more precision and conviction, aided by the two best players on the field in Paddy Cadell and Lyndon Fairbrother.

Apart from finishing with thirteen players, Ballingarry will be disappointed that they failed to really test Brackens and after a level first quarter, they never really recovered from Fairbrother's stunning goal.