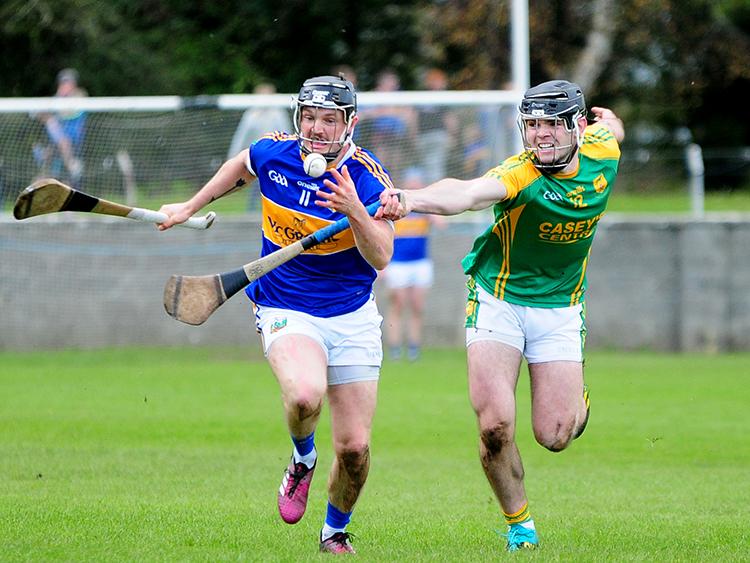 Kiladangan progressed to the semi-finals of the FBD Insurance County Senior Hurling Championship on Saturday afternoon at MacDonagh Park in Cloughjordan, but only after Brian Lawlor’s men were forced to come through a terrific battle with Toomevara. Indeed, the North champions should be delighted with the manner of this victory.

Against the odds Toomevara were absolutely superb. The Greyhounds brought a real jagged edge to this contest and although they trailed 0-8 to 2-7 at the interval manager Denis Kelly re-configured his side significantly for the second half; Kelly opted to employ a sweeper system to significant effect and the sides were level (1-10 to 2-7) with twenty minutes to play.

And, the reaction of the Kiladangan players to this predicament should warm the hearts of the management team led by Brian Lawlor. The Kiladangan lads found themselves at the wrong end of a broken bottle, but the side coached by Seán Treacy (Portumna, Galway) still prevailed. Indeed, Kiladangan won the remainder of this blistering contest 1-5 to two points. The North champions were asked a question and Kiladangan answered it emphatically - coming out the right side of such a physical contest should really stand to Kiladangan in their up-coming semi-final.

Toome were terrifically genuine in their approach to every single contested ball and although Russell Quirke, Josh McCarthy, Jason Ryan and Robbie Quirke had fine outings Kiladangan featured a slight edge over their opponents in terms of raw quality.

Barry Hogan was superb on re-starts and also made some telling stops, David Sweeney had a fine game on Toome danger man Mark McCarthy, Joe Gallagher was immense at right wing-forward, Dan O’Meara represented a huge threat and Willie Connors stood out while the inter-county star also conjured an absolute moment of genius during the opening half - see below for details.

The opening quarter of this contest featured some ferocious hits and it is a credit to both sides that a free was not conceded until the 15th minute - the exchanges were incredibly hard, but also fair.

Inside the opening twenty-two seconds Jason Ryan drove forward and presented Toomevara with the lead thanks to an eye-catching right-handed effort. And, the outstanding Josh McCarthy enjoyed a terrific goal-scoring opportunity as early as the second minute; McCarthy had Barry Hogan’s goal at his mercy, but David Sweeney had sensed the danger, abandoned his man and just got back in time to hook the left-hander.

Billy Seymour steadied Kiladangan with a point soon after, but Toomevara created another excellent goal-scoring opportunity in the fifth minute when Josh McCarthy set up Colm Canning. Barry Hogan, however, advanced off his line to smother Canning and Kiladangan were reasonably fortunate to survive the subsequent goalmouth scramble.

Toome steered the resultant ’65 wide and it was then that the composure of this Kiladangan team was best illustrated. At that juncture ‘keeper Barry Hogan may well have been tempted to launch his re-start (long-long), but the inter-county panelist had other ideas and the confidence to ping an absolute beauty into the hand of Willie Connors who was dropping deep from centre-forward (and presenting Toome centre-back Jason Ryan with a substantial headache). Connors, in turn, found Joe Gallagher and the leader of the Kiladangan team landed his shot.

Two minutes later Connors was at it again: this time he created a goal chance for Dan O’Meara, but Toome ‘keeper Rory Brislane saved the wing-forward’s shot. Billy Seymour converted the resultant ’65 and Kiladangan led 0-3 to 0-1.

Josh McCarthy hit back for Toomevara before we were treated to an absolute moment of genius in the 13th minute: when Paul Flynn picked out Willie Connors inside the opposition 21-yard line and to left of goal there appeared little danger; especially when two Toome defenders boxed out the Kiladangan centre-forward. With his back to goal Connors, however, conjured an extraordinary flick over his head and after his shot looped into the top right hand corner Kiladangan led by four (1-3 to 0-2). Hopefully, someone has this cracker on video.

Josh McCarthy hit back with a brace for Toomevara, but Kiladangan pieced together some terrific moves between the 18th and 24th minutes when firing 1-2 without reply. A Dan O’Meara point set them on their way before Paul Flynn turned over a Toomevara defender in the 24th minute; Flynn found Joe Gallagher and the wing-forward turned provided for Tadhg Gallagher who landed a mighty point.

And, right from the subsequent re-start Kiladangan plundered their second goal of the afternoon. The North champions gobbled up a hanging delivery from Rory Brislane; Joe Gallagher then caught a great ball at wing-forward and attracted the second tackler to him before playing in Dan O’Meara who finished off his left (2-5 to 0-4).

To their credit Toomevara stuck at it and following points, which arrived courtesy of Mark McCarthy (free) and Robbie Quirke, there was just two between them when Kiladangan carved the Greyhounds open, once more, in the 28th minute. This time Tadhg Gallagher broke the line and set-up Billy Seymour - Joey McLoughney hauled Seymour down for a penalty which Barry Hogan narrowly lifted over the top left hand corner.

Three minutes into first half injury time Martin Minehan was fortunate not to see red for his off-the-ball strike on Toomevara’s Mark McCarthy and although Willie Connors added to the Kiladangan tally late on a McCarthy free and an excellent Paul Ryan effort from play gave the Greyhounds hope for the second half (2-7 to 0-8).

For the second half Toomevara re-configured their team drastically: Jason Ryan was moved back into the full-back line (playing as a deep sweeper), Joey McLoughney was switched to centre-back and Robbie Quirke took responsibility for the extremely troublesome Joe Gallagher at left wing-back.

Toomevara had obviously practiced this scenario and with Russell Quirke representing a vital out-ball for the Greyhounds at midfield Denis Kelly’s men stormed back into this contest. Indeed, Toome out-scored Kiladangan 1-2 to no-score during the opening ten minutes of the second half.

Many observers may regard the use of the sweeper in a pejorative sense, but in this case Toomevara used it as counter-offensive ploy and created a terrific platform for themselves to attack. Twenty-eight seconds into the half Mark McCarthy booted home a goal and in the 33rd minute Kiladangan were grateful to ‘keeper Barry Hogan who advanced off his line to block another McCarthy effort.

In the 37th minute Joey McLoughney won an eye-catching turnover deep inside his own half and then picked out Paul Ryan who swung over his second from play. Three minutes later McLoughney landed a long-range free and with twenty to play the sides were level (1-10 to 2-7).

In such an entertaining contest anything now seemed possible for a Toomevara side who poured every inch of themselves into this quarter-final. And, in the 42nd minute we arrived at a critical juncture: Kevin McCarthy took on the Kiladangan defense and although he appeared to be held (twice) referee Philip Kelly penalized the corner-forward for over-carrying. The Toomevara faithful were not impressed and even less so when Barry Hogan, Tadgh Gallagher and then Dan O’Meara combined to set-up Joe Gallagher for a third Kiladangan goal in the 43rd minute (3-7 to 1-10).

Toomevara desperately tried to rally themselves with points from Russell Quirke and Mark McCarthy (free) and although such scores reduced the deficit to two (3-8 to 1-12) Kiladangan, in a real illustration of their class, closed out this contest with four successive scores from play.

Tadhg Gallagher, Billy Seymour, Paul Flynn and Ruairí Gleeson were responsible for these emphatic efforts, but it is also worth nothing that ‘keeper Barry Hogan was called on to save, once more, from the raiding Mark McCarthy in the 63rd minute.