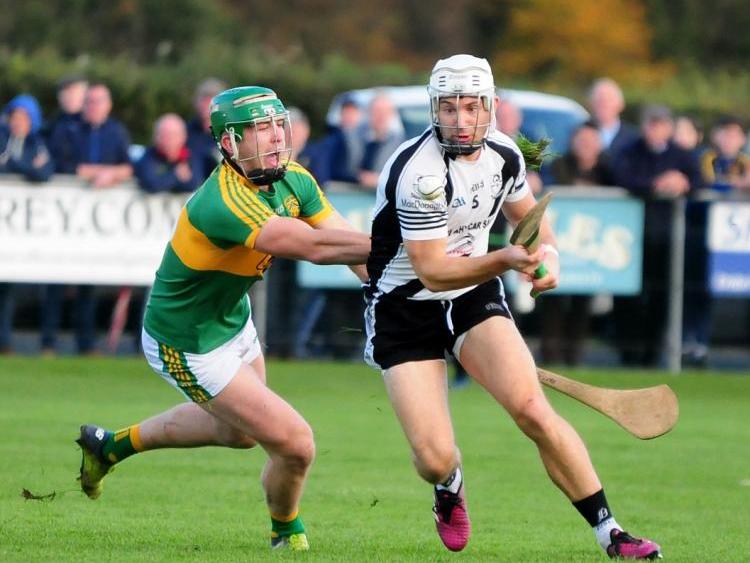 Kilruane will be hoping that Niall O'Meara will be available to play on Sunday. Picture: Eamonn McGee

There is a stunning weekend of club action in store for hurling fans in Tipperary. And, you can take in as many games as you can manage for just €20 if you avail of the County Board's innovative 'Weekend Pass' which will be available from gate checkers at all of the games on Saturday. The semi-finals of the FBD County Senior Hurling Championship will, of course, take centre-stage on Sunday, October 20 at Semple Stadium in Thurles - Nenagh Éire Óg take on Kiladangan at 1.45pm while at 3.30pm Borris-Ileigh face Kilruane MacDonagh's. And, although Kiladangan (13/8) lead the betting Borris-Ileigh (5/2), Nenagh Éire Óg (3/1) and Kilruane MacDonagh's (7/2) will certainly fancy their chances of upsetting the odds.

In recent years Nenagh Éire Óg have appeared in and lost the 2013, 2015 and 2018 finals while Kiladangan featured in the 2016 decider and Borris-Ileigh in the 2017 final. Kilruane MacDonagh's have not featured on county senior hurling final day since 1986.

On Saturday at MacDonagh Park in Cloughjordan Kiladangan beat Toomevara 3-12 to 1-12 in a thrilling quarter-final. Meanwhile at The Ragg on Saturday Nenagh Éire Óg beat Éire Óg Annacarty-Donohill with sixteen points to spare (4-15 to 1-8).

Nenagh Éire Óg, last year's beaten county finalists, limped out of the North championship when losing to Burgess (0-11 to 0-14), but the Blues did account for Upperchurch (2-21 to 1-15) and Burgess (2-23 to 2-17) during the group stage of the county championship while Nenagh also drew with Loughmore-Castleiney (0-20 to 1-17).

North Tipp champions Kiladangan have represented the form team this season - they are unbeaten in both the divisional and county series, but will have to conjure another top class hurling performance in order to see off an Éire Óg team who will be eager to make up for their disappointing showing in the 2018 county senior hurling final.

How Nenagh Éire Óg manage key Kiladangan men like Willie Connors and Joe Gallagher will have a big influence on this contest. Meanwhile the North Tipp champions will need to keep a close eye on Jake Morris.

On Sunday evening at Templetuohy defending champions Clonoulty-Rossmore exited the championship when losing out to a rampant Kilruane MacDonagh’s (1-23 to 1-10) while at Holycross Borris-Ileigh got the better of Drom & Inch (3-11 to 0-18).

Borris-Ileigh booked their place in the quarter finals courtesy of group stage wins over Clonoulty (1-18 to 1-15) and Toomevara (3-18 to 1-15). In the third round Borris-Ileigh fielded a weakened side and lost to Moycarkey-Borris (1-16 to 1-19), but Johnny Kelly's men knew at that stage that top spot in group two was already sewn up.

A big factor in this contest is the fact that Kilruane may well have to field without Jerome Cahill (who picked up a hamstring injury on Sunday) and Niall O'Meara who was sent off following a altercation in second half injury time. As a result Borris-Ileigh will probably be favoured to win this semi-final given the fact that Johnny Kelly's men can call on all of their key men.

Brendan Maher, Conor Kenny, Dan McCormack and Paddy Stapleton are in top form for Borris-Ileigh and watch out too for minor sensation JD Devaney. But if Kilruane do field with Niall O'Meara (based on a successful appeal of his red card) there is no doubting that Kilruane have the capacity to prevail even without the outstanding Jerome Cahill. Kilruane's Cian Darcy is in sensational form as is Craig Morgan and Brian O'Meara looks trim and ready to cut loose for Liam O'Shea's men at full-forward.

Meanwhile both semi-finals in the FBD Insurance Séamus Ó Riain Cup are scheduled to take place on Saturday, October 19 and promise to be entertaining affairs - Borrisoleigh will host the meeting of the Templederry Kenyons and Holycross Ballycahill (1.30pm) while at 3.30pm Mullinahone and JK Bracken's will collide at Littleton. Please note that both finalists in the competition will be promoted to Roinn I of the FBD Insurance County Senior Hurling Championship in time for the 2020 season.

Last week in Cahir Holycross-Ballycahill got the better of Carrick Swans in the quarter-finals (0-19 to 0-16) and Mullinahone beat Silvermines by a point (1-23 to 2-19). Meanwhile on Saturday, October 12 the Templederry Kenyons beat Cashel King Cormacs with six points to spare (3-19 to 2-16) in Drombane and JK Bracken’s proved far too strong for Ballingarry (1-23 to 1-8) at Littleton.

The FBD Insurance County Intermediate Hurling Championship semi-finals will take place on Saturday, October 19: The Ragg will host the clash between Kiladangan and Golden-Kilfeacle (1.30pm) while Kilsheelan-Kilcash and Seán Treacy's will collide at Leahy Park in Cashel (3.30pm).

In the quarter-finals on Saturday Golden-Kilfeacle edged out their West Tipperary rivals Knockavilla Kickhams (0-20 to 2-13) at Bansha. Meanwhile on Sunday Seán Treacy's proved too strong for Boherlahan-Dualla (1-17 to 0-14), Kilsheelan-Kilcash beat Moyle Rovers with fourteen points to spare (1-24 to 0-13) and Kiladangan dismissed the challenge of Shannon Rovers (3-13 to 1-11).

The results of the preliminary quarter-finals were as follows: Kilsheelan-Kilcash beat Ballybacon-Grange (2-10 to 0-7), Seán Treacy’s got the better of Moyne-Templetuohy (0-21 to 1-15), Golden-Kilfeacle dismissed the challenge of Moneygall (4-10 to 2-12) and Shannon Rovers beat Borrisokane (3-9 to 1-13).

Both relegation semi-finals are scheduled to take place this forthcoming weekend. On Saturday, October 19 Gortnahoe-Glengoole will face Galtee Rovers-St Pecaun in Boherlahan at 2pm while on Sunday, October 20 Ballybacon-Grange face Lattin-Cullen Gaels in Cahir at 12 noon.

On Saturday, October 19 Arravale Rovers will take on Nenagh Éire Óg in Templederry (4pm) while on Sunday, October 20 Carrick Davins face Clonoulty-Rossmore in Clonmel at 12 noon.

All four quarter-finals took place last weekend. On Saturday at New Inn Arravale Rovers beat Thurles Sarsfields with seven points to spare (0-23 to 0-16) while Clonoulty-Rossmore proved too strong for Loughmore-Castleiney in Borrisoleigh (3-23 to 0-20).

Meanwhile on Sunday at Leahy Park in Cashel Nenagh Éire Óg beat Skeheenarinky by two points (2-14 to 1-15) while the clash between Toomevara and Carrick Davins finished all square after extra-time (1-20 apiece) at Boherlahan. The replay took place on Wednesday evening at Clonoulty when Carrick Davins prevailed on 4-24 to 1-16 scoreline.

The FBD Insurance County Junior B Hurling Championship semi-finals got underway on Saturday, October 12 when Borrisokane beat Ballybacon-Grange (2-16 to 0-10) at Cappawhite.