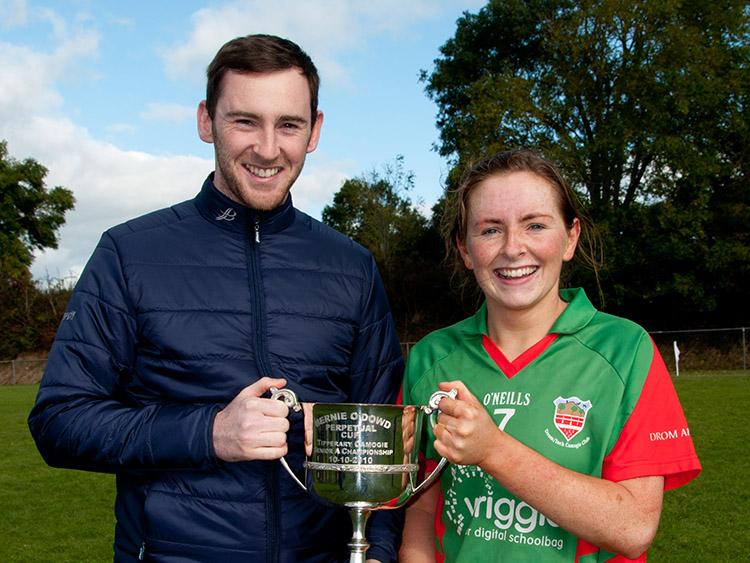 Heart-warming scenes greeted referee TP Sullivan’s final whistle at The Ragg Camogie Grounds on Sunday afternoon when Burgess-Duharra’s eight in-a-row ambitions were laid to waste by an impressive Drom & Inch side who enjoyed a comprehensive seven-point victory over their rivals.

Following the game we were treated to a raw out-pouring of emotion as Drom & Inch celebrated beating the red-hot favourites to claim their first title in eight seasons.

And, Drom & Inch were terrific value for their win. Their touch, striking, work rate, team work and physical conditioning all appeared superior to a Burgess-Duharra team who only managed two points from play. Indeed, a recurring feature of this contest was the disciplined tackling of the Drom & Inch team; Burgess-Duharra players were forced to over-carry on a regular basis and each turnover was loudly celebrated by the Drom & Inch contingent.

Caoimhe Bourke, Eimear Cahill, Maureen Ryan, Joanne Ryan, Eimear McGrath, Niamh Treacy and Miriam Campion shone brightly for Drom & Inch, but wing-back and captain Aoife McGrath was absolutely outstanding. And, Aoife McGrath was fittingly presented with the player of the match award in recognition of her contribution to this decider.

Burgess-Duharra’s touch appeared a country mile off the pace during the opening half while Drom & Inch were sharp. Goalkeeper Caoimhe Bourke roared on her teammates at one end of the field while at the other Niamh Treacy and Miriam Campion wreaked absolute havoc.

Amy Kennedy set up Jenny Grace for Burgess-Duharra’s only score from play during the opening half (third minute) and although Joanne Ryan’s shot dropped short in the sixth Dee Dunne buried the break off her left hand side to present Drom & Inch with an encouraging 1-0 to 0-1 lead. Miriam Campion created an opportunity for team captain Aoife McGrath to force Drom & Inch three clear soon after while a Burgess-Duharra defender was harassed into an over-carry in the ninth minute and following Eimear McGrath’s free Drom & Inch led by four (1-2 to 0-1).

Jenny Grace (free) responded for Burgess-Duharra, but Drom & Inch were growing in confidence and when Eimear McGrath (free) and Joanne Ryan added further efforts the challengers led by a very significant five (1-4 to 0-2).

Eimear McGrath squeezed in a mighty long-range point effort between two Jenny Grace frees and with five minutes to play Burgess-Duharra were still in touch (at only four points adrift), but in the 26th minute Drom & Inch conjured a goal of terrific quality: Niamh Treacy powered past the challenge of her marker, broke the line and charged toward goal; Treacy then sucked in another defender before finding Miriam Campion who planted her shot in the top left hand corner.

Eimear McGrath converted another free in the first half injury time and Drom & Inch led by a whopping eight points at the break (2-6 to 0-4). And, the lead enjoyed by the challengers could have been even more significant, but Burgess-Duharra ‘keeper Ciara Holohan did well to save an Eimear McGrath shot in the 30th minute.

Burgess-Duharra now had the wind at their backs, but Drom & Inch didn’t seem likely to give an inch. Indeed, Ciara McKeogh appeared to be one of the few Burgess-Duharra players prepared to battle with the Drom & Inch girls who absolutely meant business when the ball was there to be won.

A Burgess-Duharra defender was harried into another over-carry six minutes into the second half and Eimear McGrath converted the resultant free (2-7 to 0-4).

The raw quality of the Burgess-Duharra players, however, featured in the 37th minute when Ciardha Maher won Ciara Holohan’s puck-out and found Amy Kennedy who took on the Drom defence before being fouled for a penalty - ‘keeper Caoimhe Bourke saved Jenny Grace’s subsequent shot.

Between the 39th and 43rd minutes Burgess-Duharra rallied when Ciara McKeogh and Ciardha Maher (twice) were fouled for frees which Jenny Grace converted to leave six between the sides (2-7 to 0-7).

And, in the 51st minute Jenny Grace almost created a goal which could have wrenched this final in a very different direction; Grace flicked a quick free into the hand of Amy Kennedy, but the full-forward’s shot was saved by an alert Caoimhe Bourke.

In the 53rd minute Drom & Inch conjured the score of the game - Aoife McGrath won a ruck in the middle of the field, burst forward and fed Joanne Ryan who, in turn, found Miriam Campion. The full-forward set up Niamh Treacy for a terrific point and Drom & Inch led by seven.

Drom came agonisingly close to extending that advantage to ten with five minutes to play when a Niamh Treacy effort at a point hit a post and dropped into the hand of Miriam Campion; Gemma Grace did well to block Campion’s subsequent shot, but Eimear McGrath converted the resultant ’50.

In the 58th minute Jenny Grace set up Emily Morrissey for Burgess-Duharra’s second point from play and when Jenny Grace’s free was deflected over by Mairéad Eviston in the 62nd minute there was just six in it.

Right from the subsequent re-start Drom & Inch broke through the Burgess-Duharra lines three times before Joanne Ryan flicked over the final score of the game. Meanwhile Jenny Grace hand-passed a late goal chance wide for Burgess-Duharra. 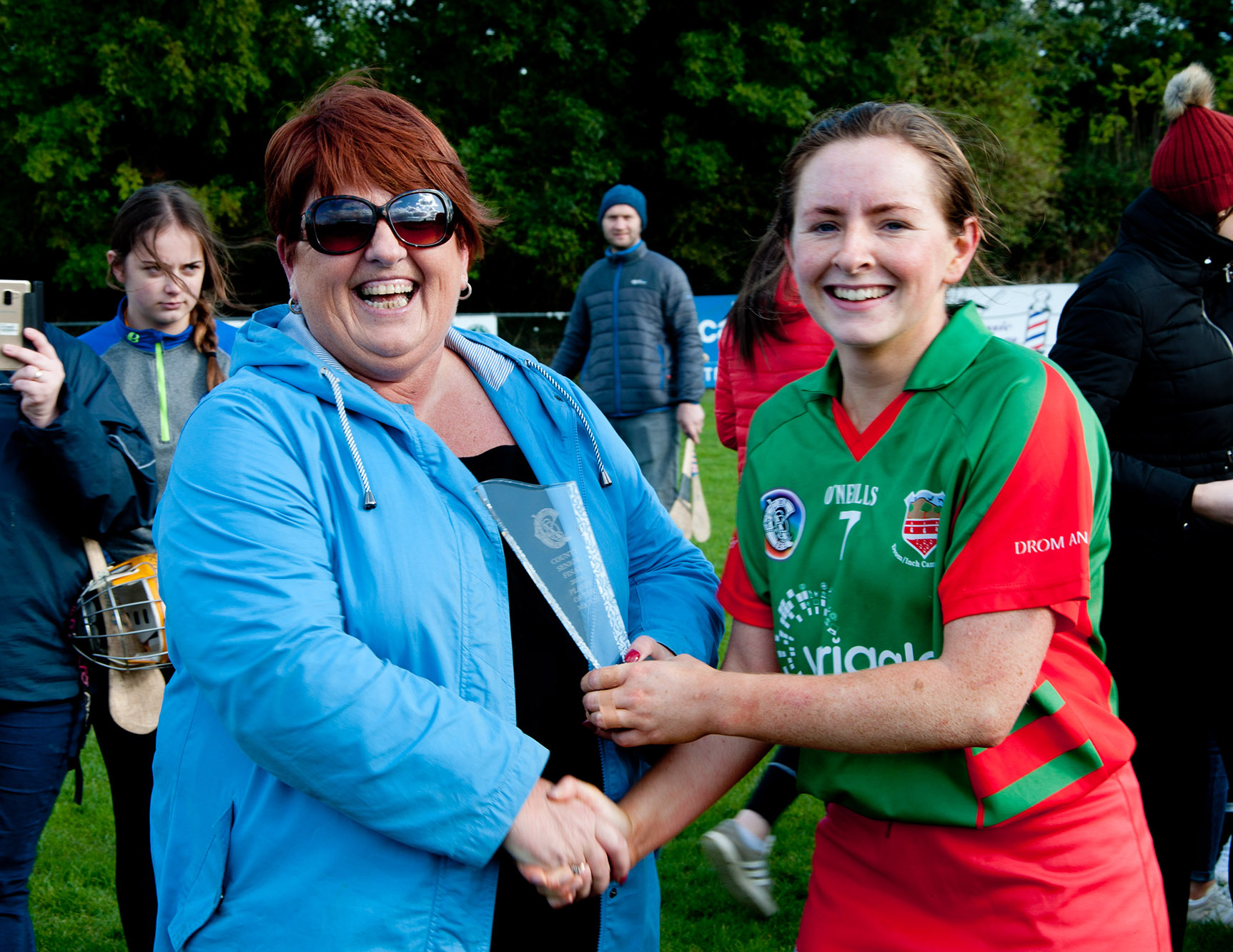