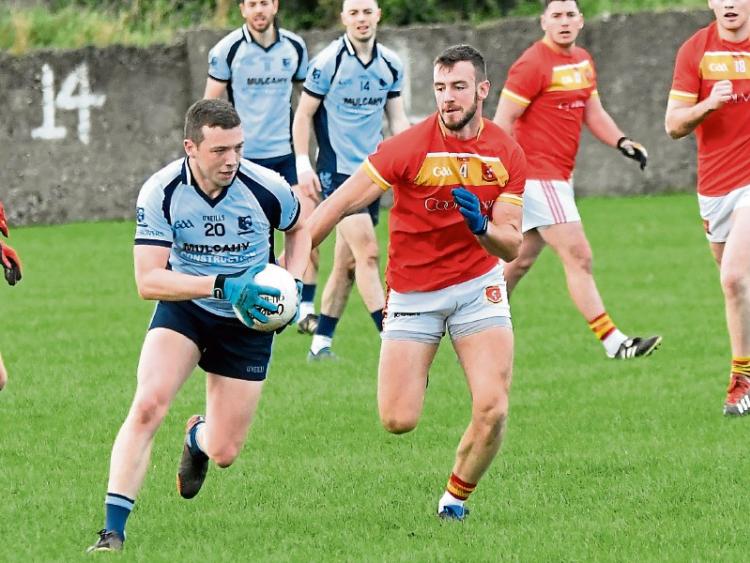 On Sunday last in Davin Park the second Clonmel Oil South Tipperary Senior Football League semi-final was played before a small attendance of hardened football supporters, with both teams having one eye on the upcoming county games and using their panels wisely.

Moyle Rovers ran riot in the second period in a game in which two goalies received black cards on the same team, resulting in two penalties put away by Liam Boland for Moyle Rovers. The opening half was very evenly contested and within a minute of the start John O’ Dwyer scored a point from play. Almost from the kick out Shane Foley had the teams level with a point from play, with Liam Boland scoring the first point from a free in the third minute.

In the eighth minute Thomas Keaveney had a point from play and within a minute Liam Boland had a point from play. The next two scores came from a Tony Doyle free and from play by John O’Dwyer to leave it Killenaule 0-5 Moyle Rovers 0-3 at the end of the first quarter, followed by  an exchange of  points  from play from Diarmuid Foley and Thomas Keaveney. In the 24th minute  Moyle Rovers got their first goal from Aiden Mc Grath to go one up and it  remained that way to the short whistle.

The game was nicely poised at the interval, Moyle Rovers 1-4 Killenaule 0-6.

Moyle Rovers really took off at the start of the second half, scoring 3-3 in the third quarter without reply. The first goal came from a   36th minute  penalty from Liam Boland after Michael Fitzgerald had been black carded. In the 45th minute the second penalty  goal from was scored by Liam Boland when Daniel Guinan was black-carded, with Joe O’ Dwyer going into goal for the remainder of the game.

The third goal was scored in between the two penalties by Diarmuid Mulcahy, the points coming from Richard Power, Danny Owens and Tommy Morrissey, leaving the score Moyle Rovers 4-8 Killenaule 0-6.

Killenaule came back into the game, scoring 2 points by Thomas Keaveney (one free and one from play).

However when Liam Boland completed  his hat trick of goals in the 50th minute the game was over as a contest, with  Rovers adding three points, all from play, two from Diarmuid Foley and one from Richard Power before referee Derek O’Mahoney blew the final whistle.