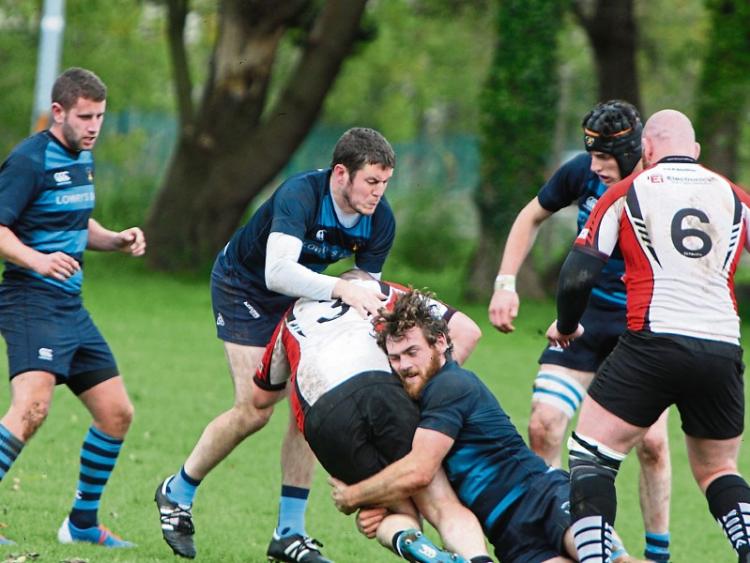 The St. Senan’s prop is brought to the ground by a crunching tackle from a Kilfeacle opponent in Sunday’s Challenge Cup game played at Shannon, County Clare

On Sunday last  Kilfeacle and District travelled to face St. Senan’s in the Challenge Cup.

The game started in dry, cold conditions with a strong breeze favouring the visiting side in the first half.

Kilfeacle struggled as a unit in the early minutes of the game because of so many positional and personnel changes but eventually in the later stages of the half took the game to their opponents.

Kilfeacle’s dominance presented the opportunity of the first score of the game, a penalty after 33 minutes, and William Staunton never looked like missing the mark. It wasn’t long before Kilfeacle extended their lead with a well-taken try from Cillian Noonan after 36 minutes, which William Staunton converted from a  tight angle.

Kilfeacle could have and should have been leading by more but left a few chances slip with some forced and some unforced errors, leaving the score 0-10 at the interval in favour of the visiting side.

Kilfeacle continued to build phase after phase and St. Senan’s couldn’t blame the weather, they were just not prepared for the blistering pace and intensity of their opponents at the restart. With St. Senan’s still reeling Kilfeacle didn’t lose any impetus and with 50 minutes on the clock they notched up another, somewhat fortuitous score. The pack had once again worked through a number of phases and set up camp in their opponents 22. William Staunton dropped back into the pocket and set himself up for a drop goal opportunity. His attempt looked on target but hung up on the breeze and struck the upright. The attacking Kilfeacle players were first to react and three passes later Kevin Doyle touched down in the corner. William Staunton’s conversion attempt just missed its mark and the score was now 15 points to 0 in Kilfeacle’s favour.

The visiting support was jubilant and the home support worried. Kilfeacle endeavoured to keep the onslaught going. However it took them 12 minutes before they added another try which was touched down under the posts by Cormac Ryan after a fantastic break by Ricky Witney. William Staunton converted and increased their lead to 22 points to 0.

St. Senan’s never gave up even when the game was over as a contest. In the last 10 minutes the game lost its shape after a number of injuries and substitutions, which gave St Senan’s the opportunity to have a sustained amount of possession. Kilfeacle were defending manfully. The referee had signalled time was up when St. Senan’s finally breached the Kilfeacle defence and scored an unconverted try in the corner, which was the final score of the match.

“This has been, so far, a solid start. I don’t think we have exceeded our expectations because we have always known what we are capable of,” Paul Donovan said.

“We are becoming more consistent which is something we are working on. We have done well as a squad to get where we are. We’ve been working on skills, fitness and working as a team, that’s something that we really had to work at and the squad to a man has put the effort in. We are capable to step up to any challenge and the challenges don’t come any bigger than an All-Ireland Junior Cup clash at home to Wicklow RFC next week. We will start next week as underdogs but we will do our best.”

The team hope that their supporters will continue to come along and support the “Boys in Blue”.

Both mini and youth Rugby training continues at Morrissey Park, (the Hill), in Kilfeacle every Friday at 7pm. With a primary focus on fun, safety, learning the skills and improving the all-important agility, balance and co-ordination of each child we welcome back our regular players and we extend a warm welcome to any new players who would like to come along. The underages of Kilfeacle have experienced quite a degree of success over the past number of years and it is envisaged this year will be no different. Children from the ages of 6 and upwards are most welcome and importantly parents of the children are encouraged to come to the sessions, meet the coaches of each of the grades, meet the other parents and generally integrate within the groups. So see you all in Kilfeacle every Friday at 7.