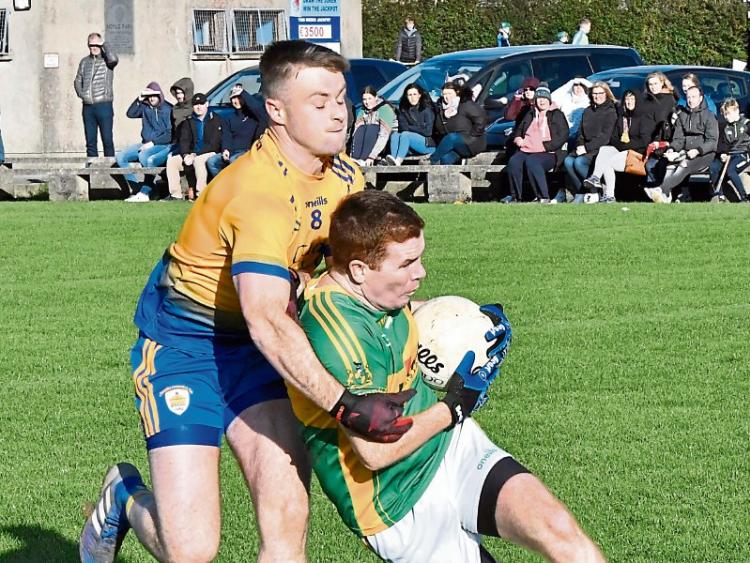 With the assistance of the wind, Clonmel Og made a great start, getting out of the traps at great pace and scoring 1-3 in the first quarter.

But those early stages were dominated by Clonmel Og and they scored a goal in the first minute when a first-time effort by Cian O’Sullivan went all the way to the net.

After Sammy Ryan struck back with a Commercials goal, Johnny Cagney responded with a point from a free for Clonmel Og.

The middle third of the game was dominated by Clonmel Og’s Graham Quinn, Karl Kearney, Aaron Arrigan and Darragh Kearney.

During the second quarter the teams had an even exchange of scores, with Ryan Lambe, their most dangerous forward, scoring two points for Commercials and Conor O’Sullivan getting another.

During this quarter Clonmel Og had five wides to Commercials’ two and such was Clonmel Og’s dominance that they deserved their three-points advantage at the short whistle, 1-6 to  1-3.

After the interval Commercials introduced Sean Kennedy for Brian O’Hara, and with Commercials upping the ante they were dominant.

But their finishing left a lot to be desired and they scored only three points, all from Paudie White, including two from frees out of the hand.

Kicking five wides, Commercials were letting their chance of going in front slip through their fingers.

Then Clonmel Og, on one of their rare counter attacks, had a goal in the 46th minute when Conor Arrigan made a great run before passing to his brother Aaron Arrigan, who finished the ball to the net to give them a three-points lead.

Within a minute the lead was stretched to four when Cian O’Sullivan pointed a free to put them 2-7 to 1-6 ahead.

In the last five minutes of the game Commercials attacked time after time but had only three points to show for their efforts, the scores coming from Paudie White (two frees) and one from Conor McGeever.

A point for Clonmel Og from a Johnny Cagney free, after Graham Quinn made a great run forward before being fouled, kept their noses in front.

During the second period Clonmel Commercials had seven missed chances, with Clonmel Og’s defence just holding on for a deserved victory and a county final appearance against Moycarkey/Borris the weekend after next.

Commercials, who had Kevin Harney black-carded in the 61st minute, had nine of their senior panel on view.

Ryan Lambe was their stand out player while Michael Murphy, Paudie White and Sammy Ryan could not be faulted for their commitment.