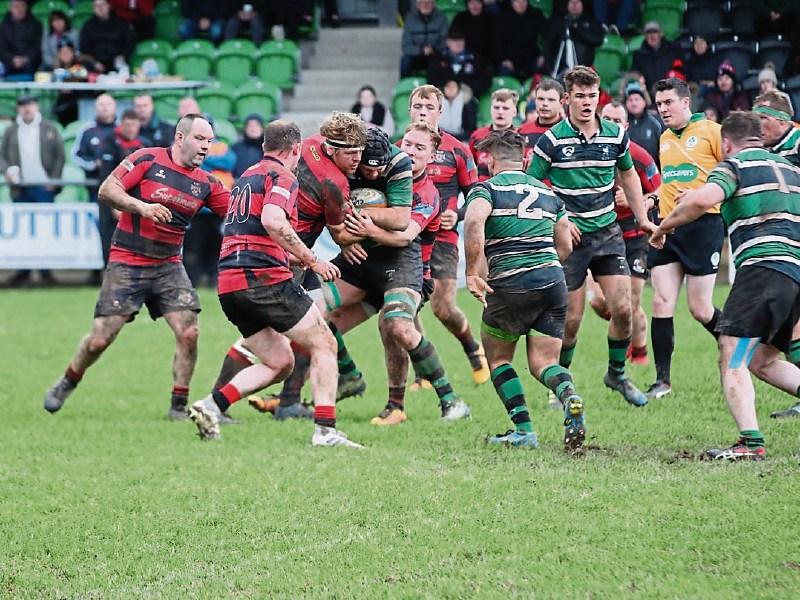 The charge of Clonmel forward Tony Cantwell is temporarily halted, as his front row forwards come to help him protect the ball in Saturday’s drawn AIL Division 2C game at Ardgeeha

While the world anticipated the end of the Rugby World Cup, the people of Clonmel and Tullamore had more rugby to look forward to on Saturday last, with an important mid-table clash.

Both sides were on equal points, with Clonmel just above thanks to points difference. Clonmel in green and Tullamore in red, was almost a referral to South Africa and England, and the home crowd hoped for a similarly dominant display from the men in green.

And that was exactly what we got in the opening 10 minutes. Clonmel were completely in control, forcing the Offaly side to defend wave after wave of attack. Eventually, Dylan Cadogan opened the scoring off the tee. Clonmel’s scrum dominance was obvious from early on and would prove vital to their later game plan.

But that first ruthless wave of attack was to be Clonmel’s last for the first half. Tullamore were relentless in attack and were deep in Clonmel’s 22 for the rest of the half. However, Clonmel’s defence could only be considered heroic and Tullamore came away from that unyielding 20 minutes with only three points.

However, the midlanders did get their try eventually, but not particularly through their own efforts. A blocked down kick gave them free passage to a seven pointer. While it was a disappointing end to the half, Clonmel had so much to build upon. Their South African-esque scrum was devastating, and their defence impenetrable. They hoped to explode into the second half, similar to the Springboks earlier on. 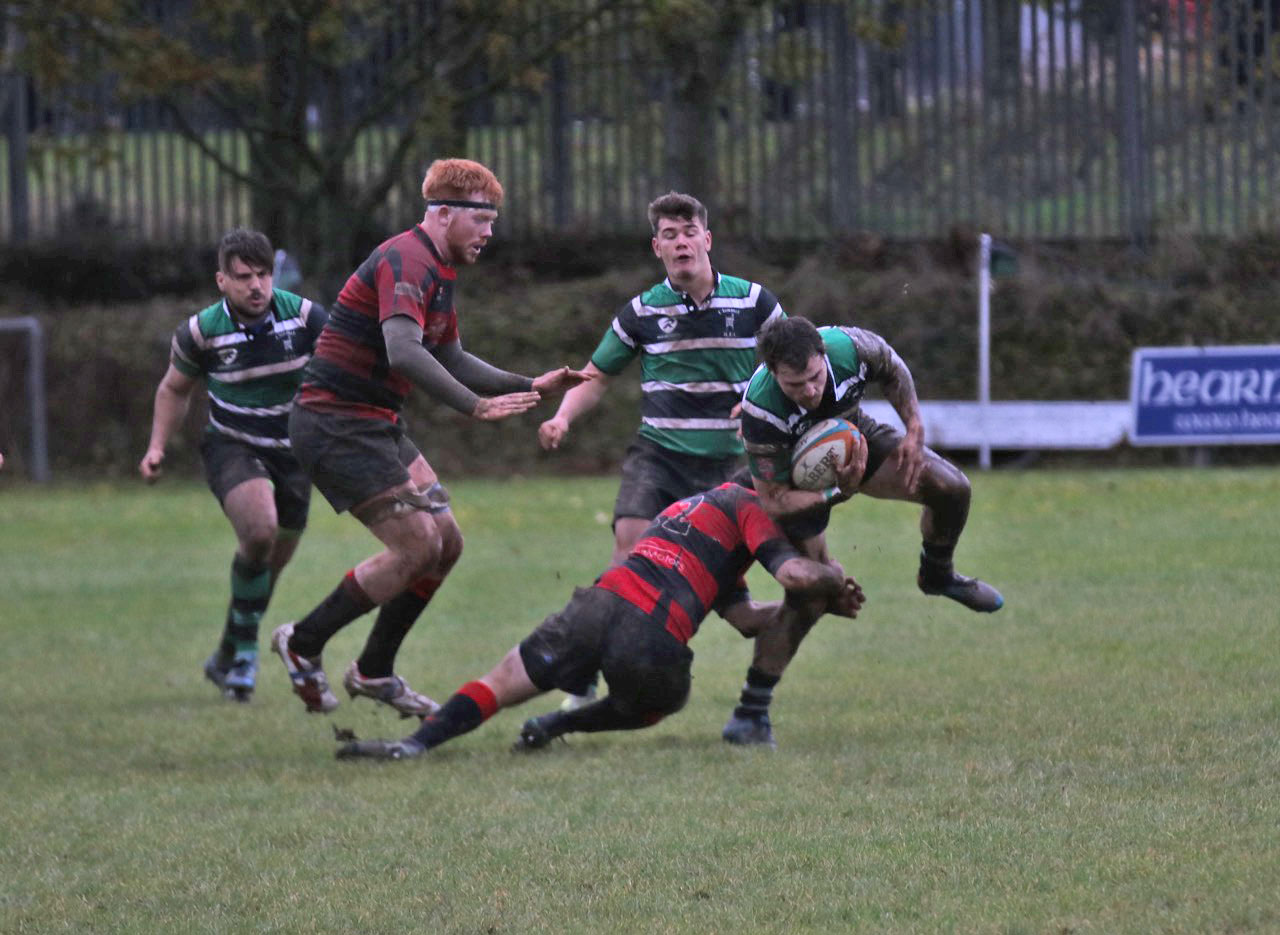 Action from last Saturday's AIL Division 2C game between Clonmel and Tullamore at Ardgeehan. Clonmel's Luke Hogan is tackled with support arriving from by Martin Altamirano and Luke Noonan.

And explode they did. They started similarly to the first half with a blitzing attack, but missed a penalty five minutes in. Two minutes later however, Cadogan nailed another penalty to close the gap to four points, in favour of Tullamore.

Shortly afterwards, the ever-changing tide of attack swept into the Offaly side’s favour. A yellow card had Clonmel defending with 14. They scrambled in defence and despite giving away two kickable penalties, Tullamore failed to convert.

When Clonmel returned to a full complement of players, they began turning the screw. Clonmel were playing all the rugby and Tullamore were struggling to cope. Eventually, Andrew Daly went over in the corner to put Clonmel into a one-point lead. Then Cadogan caressed the ball over for the conversion into an immense, swirling wind. This was to prove vital, as that three-point lead was much safer than a one-pointer.

Tullamore knew they had little time left and threw the kitchen sink at Clonmel. Eventually they drew a penalty and with the last kick of the game pulled themselves level, which was probably a fair result, considering how both sides played. But at the same time, both teams probably felt like they could’ve gone on to win it.

NEXT UP IS LONG TRIP TO DERRY

While this game’s implications mightn’t have been as groundbreaking as Siya Kolisi lifting the Webb Ellis Cup, it had influence upon the table. Newly promoted Clonmel maintained their spot in the top half of the table, and will make the long journey up to City of Derry this weekend.