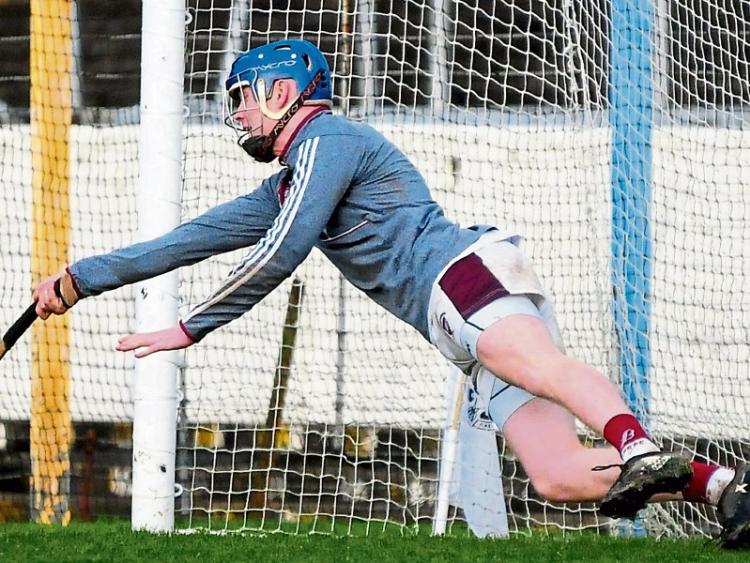 Borris-Ileigh in seventh heaven, Kiladangan in deep depression – such were the contrasting emotions on Sunday evening last at the Stadium following a compelling hurling final. A seventh title for Borris bridges a long gap back to 1986 while for the Puckane club the wait for a maiden breakthrough goes on.

It was a dirty, grey day at the Stadium but two deciders packed full with incident and drama kept the 7,250 paying patrons engrossed. Brackens’ late, late show on a Fairbrother free in the opening bout was as dramatic as they come – not to mention controversial. Twenty four hours earlier there had been drama and controversy too at Bansha as Sean Treacys claimed a stirring intermediate crown. Kiladangan’s cup of woe overflows.

There are days when you know from early that it’s not your time and Kiladangan had such a harbinger in the early seconds of this final. The very first attack saw Billy Seymour cut through on goal but his shot hit the goalie and then rebounded back off both crossbar and post before being scrambled clear. The gods were already frowning on their efforts.

What such an early goal would have done for Kiladangan is now merely the stuff of idle speculation. A lift it certainly would have been, a nerve-settler for sure and maybe a prompt to push on with confidence and deliver a match-winning performance.

In its absence perhaps the old doubts resurfaced. Going where none from your club has gone before is always a daunting frontier and when the breaks go against you the barrier seems so much higher.

The losers will have deep regrets about this game, because unlike the 2016 final against Sarsfields this one was winnable. They didn’t help themselves with a passing game ill-suited to the conditions and all the errors they made will haunt them on reflection: the passes astray, players soloing into traffic, crossfield deliveries going over the line, uncharacteristic wides by Willie Connors and Billy Seymour, a careless pick-up by Joe Gallagher, a saved penalty … the list goes on.

Against that Borris-Ileigh played the conditions much better, being more direct and surer and crucially they put in a savage work-shift. Visualise Dan McCormack back on his own end line winning possession and a free out; or midfielder, Tommy Ryan scooping the ball off the goal line after Tadhg Gallagher should have scored. Incidents like these highlight how passionately Borris-Ileigh chased this game, the blocking and hooking, the crowding out of Kiladangan players all central planks of their game plan which carried the day.

Central too for Borris was the display of James Devaney. Electric and elusive in attack, he turned in an incredible first half display especially, his goal a crucial item in the interval lead of five. On a day when Conor Kenny failed to score it was Devaney, Niall Kenny and Jerry Kelly who took up the slack. Dan McCormack too turned in a massive shift and the leadership of Brendan Maher and Paddy Stapleton were critical also on this memorable day for the club.

Not to be forgotten either was the display of goalie, James McCormack. His penalty save from Barry Hogan in the second half was a critical moment in the action. Dan O’Meara had kept Kiladangan in the race with a goal early in the second period but they needed another if they were to overcome Borris. It never came.

And so Borris deserved their seventh county title. Perhaps it was their stronger tradition that steeled them for the occasion, or the revenge motive from their North final clipping by the same opposition. For whatever reason they were the more driven side, with the better method and with most of their key men delivering. By contrast Joe Gallagher eventually went off injured for Kiladangan and once more Billy Seymour couldn’t deliver on the type of menace he produced for the county U-20s.

Kiladangan had a few complaints afterwards with the officiating. Certainly they should have had a second penalty at the very end when Dan O’Meara was clearly taken out by Paddy Stapleton, and Kieran Maher was very fortunate to escape a second yellow after a high tackle earlier in the second half. Balancing that, though, Jerry Kelly had his helmet pulled off by a Kiladangan defender, which is a red card offence, and the penalty award that went Kiladangan’s way was very soft.

So, Borris celebrate but not for too long we hope. They face Cork’s Pat Horgan and Glen Rovers this weekend, where the honour of Tipperary will be at stake.

The Seamus O’Riain final had its drama too, where Barckens stole a late, late win over exasperated Holycross. With the game very deep into injury time and Holycross holding a two-point lead, the drama unfolded. First Holycross goalie, Dinny Ferncombe, who was one of the stars of the show saving an earlier penalty, seemed to be clearly fouled as he tried to emerge with possession. No free was awarded, however, and the sense of injustice was compounded seconds later when Brackens were given a controversial free from just outside the twenty-metre line after an attacker seemed to barge into a defender.

Lyndon Fairbrother was tasked with the last-chance free and he fairly rifled it to the net off the slippery surface. Holycross were left stunned, as Brackens celebrated a first win at this level.

It’s a sore one for Holycross, who suffered a similar controversial defeat in a county minor final some years ago. In truth they seemed to be the better side but didn’t put the game safe and left themselves vulnerable to that late strike. Darragh Woods hit some great points but missed a few critical ones that might have made the difference.

Holycross led by two at the break but Brackens came strongly in the second half and eventually led with a Lorcan Egan point and about seven minutes left to play. However it was Holycross who found the best response in the following minutes and points by Liam Moloney and Jamie Woods took them two clear before the late dramatics. An earlier Liam Moloney effort was waved wide, with many in the Old Stand feeling that it went between the posts to add yet another layer of controversy.

It’s a major breakthrough for Brackens, who face Commercials in this weekend’s football decider. I thought Tom Murphy and Paddy Cadell were very strong at the heart of their defence. Eanna McBride and Neil Quinlan were others to catch the eye while Shane Bourke looked promising in attack.

And so to the intermediate final. Eamonn Sweeney on the back page of the Indo on Sunday was lauding the efforts of Kiladangan and in his enthusiasm inserted this clanger: “They’ve already won this year’s county intermediate title, a pretty stunning achievement for a rural club”. It would indeed be stunning if it were true but Sean Treacys had something to say on that count.

It’s probably wrong of me but I take a type of perverse pleasure when the big boys of the national media get their facts wrong. I shouldn’t, of course, because between typos and inaccuracies I make enough mistakes myself but sure we all love pointing out the other man’s slips. The Irish Examiner’s report on  Sunday’s final had Tadhg Gallagher coming close to a goal in the early seconds. It was actually Billy Seymour. The same account had corner back, Liam Ryan, taking the ball off the goal line in the second half – actually it was midfielder, Tommy Ryan.

Anyway that intermediate final, switched to Bansha on Saturday, was as entertaining an affair as any of the other deciders at the weekend. It was full blooded, eventful and with elements of controversy also in the mix.

Kiladangan led by two at the break. A long Darragh Egan free went to the Treacys’ net but Patrick Deegan hit a cracking one for the West side after taking a pass from Seanie Ryan. Treacys might have had a few other majors also but Darragh Egan in turn denied Stevie Carr and Darragh Kennedy on clear-cut chances.

The ebb and flow of a gripping contest continued in the second half. Egan had another long-range goal for Kiladangan but Patrick Carey got a fine one for Treacys. It was up and down, a mighty tussle despite the conditions.

In the end the critical score had a tinge of good fortune attached to it. With Treacys a point down, Pat Carey faced up to another free for the leveller. His effort was mishit, however, but when it dropped short substitute, Christy Egan, was credited with the touch that steered it away from Darragh Egan and into the net. Kiladangan argued for square ball but the score stood. It was only one of several disputes on a day of poor umpiring. Lifted by that score Treacys drove forward to seal the win in the remaining minutes.

It’s a memorable one for the West club, bridging a gap that goes back to 1966 when, coincidentally, they also defeated Kiladangan in the junior final of that year. That was the win that sparked the club’s golden era of the seventies.

For sheer zest and exuberance they were deserving winners on Saturday.  On 1-6 Patrick Carey was top scorer and the key man in attack. Patrick Deegan was very influential too, as well as Seanie Ryan and Michael Feehan. But mostly it was the workrate and relentless grafting that wore down the North side. They’ll enliven the West senior championship next year.

Finally, mention of an event last Friday night at New Inn where I was delighted to be asked to launch the history of the local Rockwell Rovers club. Seamus King adds this to his impressive catalogue of club narratives, which he has researched and penned over the years. It’s quite a tome, spanning 358 pages covering all the GAA activity of a club that dates back to 1887, as well as a rich selection of other feature items on a parish not short of interesting personalities.

The local committee is hardworking and industrious, having developed a fine roadside venue, which is often in demand. My thanks for the invitation to what was a most enjoyable night.