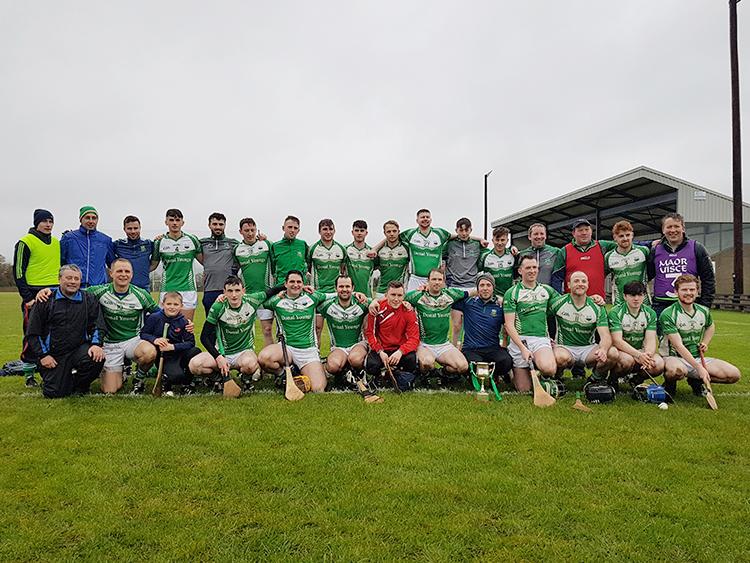 The Drom & Inch junior B panel of players who are now preparing for a Munster final.

Drom & Inch are now preparing to take on Limerick champions Garryspillane in the Munster Junior B Club Hurling Championship final on January 11 - on Saturday afternoon a composed Drom & Inch side cruised to nine-point win over Castletownroche (Cork) in a one-sided provincial semi-final at Páirc Íde Naofa in Raheenagh (Limerick).

The Drom & Inch defence was particularly solid with Eric Woodlock, Cathal Ryan and Kevin Ahern in terrific form. Colm Kinane and Ciarán Ryan ploughed through a huge volume of work at midfield while Jerome Ryan was the outstanding candidate for the man of the match award. Ryan scored two excellent points from play and was always eager to work back and help out his defence. The only downside to the centre-forward’s performance was that he broke two hurleys in his efforts to help out his backs.

With Cathal Ryan and Kevin Ahern absolutely flying it in the Drom & Inch half-back line the Tipperary champions almost conjured a goal during the opening quarter when a smashing delivery from Ciarán Ryan picked out Mathew Ryan, but Castletownroche ‘keeper Dónal Relihan saved.

Mathew Ryan added another free to leave four points between the sides (0-4 to 0-0) before Jack Relihan was sent off for a high and dangerous challenge on Liam Harty - Dónal Relihan brilliantly saved Mathew Ryan’s subsequent penalty.

The Castletownroche management team took issue with the dismissal, but the Cork men may well have had Dylan O’Connor sent off as early as the ninth minute when the midfielder caught Jerome Ryan very late with a wild pull.

The point of the game materialised in the 27th minute - Mathew Ryan and Colm Kinane worked back brilliantly and battled alongside right wing-back Cathal Ryan before winning the ball and moving it smartly forward to Jerome Ryan; the left-hander landed a mighty point off right from the middle of the field.

Mark O’Callaghan set-up Dylan O’Connor for Castletownroche’s first score from play immediately after the break, but Drom & Inch responded through Thomas Ryan and Jerome Ryan. And, Trevor Hassett’s men way well have also added a goal to their tally in the 35th minute, but Wesley Walshe did especially well to block Jerome Ryan’s effort.

Following a Mark O’Callaghan free there was five between the sides (0-8 to 0-3) entering the final twenty minutes, but Drom & Inch never looked under any real pressure. Indeed, Mathew Ryan (free), Séamus Butler (free) and Michael Clohessy, with a fine individual effort, added to their tally while Liam Harty was unlucky not to goal in the 51st minute when he pounced on a break following a Jerome Ryan delivery.

Efforts from Liam Harty and Séamus Butler (free) brought the scoring to a conclusion from a Drom & Inch point of view while in second half injury time goalkeeper Paul Connors conjured three eye-catching saves from Jonathan O’Callaghan, Dónal Relihan and Dane O’Neill.