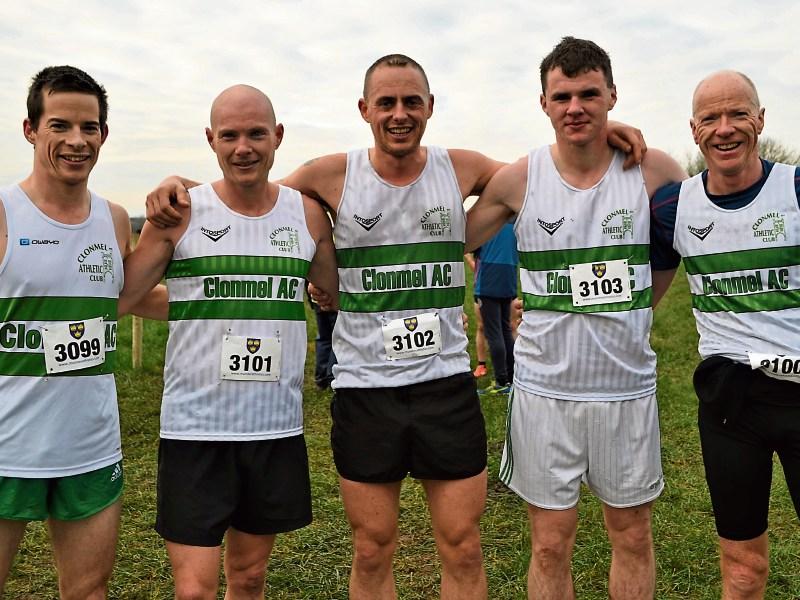 The Clonmel AC team who won the team gold medals at the Munster Cross Country Championships held at The Turnpike, Thurles, on Sunday last.

In the Women’s 5k race the county was  represented by four clubs. Right from the start the pace was strong and soon we had a trio of county athletes in the chasing pack - Angela Fogarty, Moyne, Karan Coughlan, Dundrum and Kealey Tideswell,  Clonmel

They were still together going out on the final lap, then over the closing stages Karen produced a strong sustained effort to finish fifth ahead   of Angela 6th and Kealey 7th, great running by all three athletes. With four to score on the county team, the team was in a strong position and with Suzanne Shine of Clonmel finishing  in 10th place these four athletes combined to win the inter county silver medals.

On the club front,  Clonmel having two athletes in the top 10,  were looking good for a podium place. Aine Roche and Sareen Walsh both  finished well in 14th and 19th for the  inter club silver.

The men’s race also proved very competitive. John Fitzgibbon of Thurles Crokes lead the county charge as he went with the early leaders. He was well positioned throughout and held off a late challenge when finishing 4th with Paddy Cummins of Moycarkey Coolcroo 5th and Jimmy Boland of Clonmel 6th.

Then we had great a group of athletes vying for the final three places and so over a very competitive last lap we saw great running from David Sheehan of Nenagh Olympic 8th, Dermot Hayes of Dundrum 11th and Gareth McGlinchey of Dundrum 13th. This team combined very well to win the inter county gold.