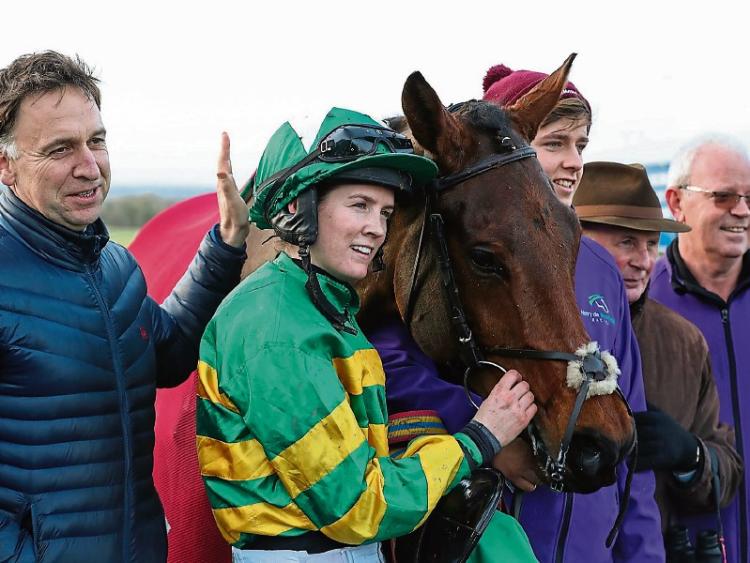 The six-year-old came with a late effort to get the better of the Gordon Elliott-trained Ben Dundee by three parts of a length at odds of 6/1.

Blackmore and De Bromhead landed their almost obligatory winner as Niccolai won the second division of the beginners’ chase at Clonmel on Thursday.

A 10/1 chance, she all but secured victory with a great jump at the second last fence but there was a slight scare late on as the winning rider lost an iron after the final fence. Moyne trainer Tim Doyle won the handicap chase with Trumps Ace which carries the colours of his owner/breeder Jim Monaghan.

A 14/1 chance, the seven-year-old led over the second last fence and was always holding the Blackmore-ridden Kavanaghs Corner to the line. Ryan Treacy was in the saddle as she won by a length and three-parts.

Kilfeacle trainer Aidan Fogarty was first off the mark at Dundalk on Friday night where the Billy Lee-ridden Enough Said scored a narrow success in the opening 5f handicap. A strong 7/2 chance, the three-year-old lasted home to win by a neck from the Michael Mulvany-trained Early Call in the colours of Theresa Marnane.

Trainer Andrew Slattery and Paddy Harnett combined to win the opening division of the apprentice handicap. The familiar colours of the Men Of Forty Eight Syndicate were carried by the five-year-old Comhghairdeas to a one length success at odds of 11/4 favourite. Ben Coen, Slattery’s nephew, landed a winner of his own as Major Power scored a narrow success in the second division of the same race. The 9/1 chance made virtually all the running and held on to score by a short head from the gambled-on 7/2 favourite Swiss Army Officer for trainer Edward Lynam.

Dubai beckons for Freescape which won the 8f handicap for David Marnane and Declan McDonogh. The 12/1 chance came from off the pace to land the valuable pot by a length and a half from the Ger Lyons-trained Kafu with Denis Hogan’s Yuften in third place.

Gavin Ryan was another County Tipperary winner on the night as he partnered the Noel Meade-trained Art Of America to win the 10f handicap. He got the 7/1 chance home by a head from the Rodger Sweeney-trained Muzbid.