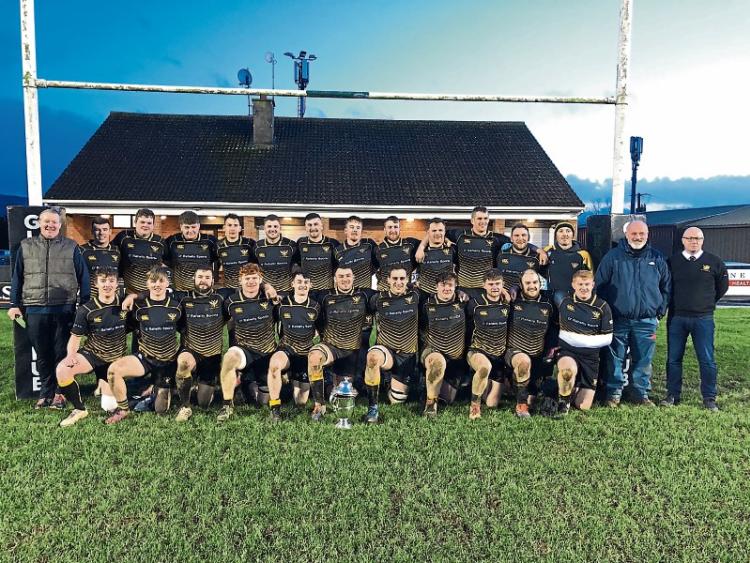 The Clanwilliam team who defeated Waterpark in the final of the Garryowen Cup.

Clanwilliam came out best in the Garryowen Cup final when coming from behind to retain the trophy.

Waterpark played with the wind in the first half and used it to their advantage, having the better of matters for the first 20 minutes. Clanwilliam defended their line well but Waterpark kicked three penalties in that period.

Clanwilliam got more into the game and after  30 minutes Niall Leahy kicked a difficult penalty.

On their next attack Clanwilliam moved the ball well, which resulted in a scrum five metres from the Waterpark line. With the Clan scrum going forward, Niall Leahy took advantage and broke through the defence for a converted try.

Turning to play with the wind in the second half, Clanwilliam upped their game and spent most of the half in Waterpark territory. When Waterpark had the ball they went through numerous phases but the Clanwilliam tackling and organisation in defence meant there were no gaps for Waterpark to exploit.

Ten minutes into the half, Clanwilliam were nearly in for a try but when a penalty came their way Leahy took the points.

With the Clanwilliam forwards getting more involved in carrying the ball out wide, more opportunities came Clanwilliam’s way and two long range penalites from Leahy put Clanwilliam nine points ahead with 15 minutes to go. Waterpark didn’t give up and were almost in for a score following a break the length of the field, only for Bryan O’Rahelly to make a try-saving tackle. An excellent clearance kick the length of the field by Leahy put Clanwilliam back in control and led to his final penalty kick to secure the win.

One of the positive features of the game for Clanwilliam was to see the competition for places, with very strong performances from all the subs used.