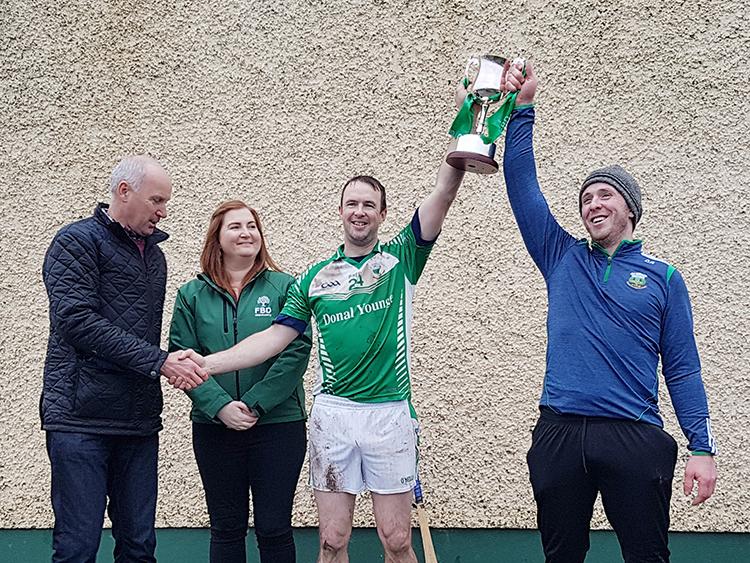 Drom & Inch joint-captains Séamus Butler and Declan Ryan pictured on county final day - they must do it all again in the Munster Club final next weekend probably.

A replay on the cards at the Raheenagh venue next weekend

Tipperary county junior B hurling champions Drom-Inch were denied a first ever Munster club title at Raheenagh this afternoon when their Limerick counterparts Gallyspillane, snatched 1-1 deep into injury time to force a draw.

The Drom-Inch win seemed entirely likely when attacker Jamie Ryan fired a fine goal in the 31st minute having taken on the defence, with Jerome Ryan following up immediately with a point, to give them a four point advantage.

But, Garryspillane had a goal of their own from a free in the 35th minute from full forward Danny Hayes to leave a point in it once more and controversy ensued when referee Simon Stokes awarded another free to Garryspillane in the 39th minute having consulted with umpires and both linesmen. Drom-Inch were very aggrieved  at the decision and as Hayes pointed the free to tie up the game, proceedings were called to a halt for full time. They must do it all again - probably next weekend again.

Drom-Inch had played into the breeze in the first half and were 1-5 to 0-7 in arrears at the break - a great position to be in considering the strength of the breeze. They had come from being 1-3 to 0-1 down - Garryspillane getting off the mark quickly through Sean Kearney, Michael O'Donnell (2) and a goal from William Harty in the 9th minute.

But, the Drom-Inch lads settled and put a good spell together in the second quarter with points from Liam Harty, Seamus Butler (4) and Micheal Clohessy setting them up nicely.

Though the game was tied within five minutes of the restart, the Limerick lads got a real shot in the arm when Kevin Meade goalled in the 6th minute, followed by a point from Danny Hayes to restore a four point lead.

But, Drom-Inch responded with Seamus Butler pointing a free and then Micheal Clohessy scored a fine goal having been fed by sub John Kennedy who had just entered the fray.

Garryspillane were reduced to fourteen men in the 27th minute of the second half when corner forward Kevin Meade received a second yellow card for waving his hurley in front a freetaker, but Drom-Inch were unable to make the extra man count fully in the grandstand finish.