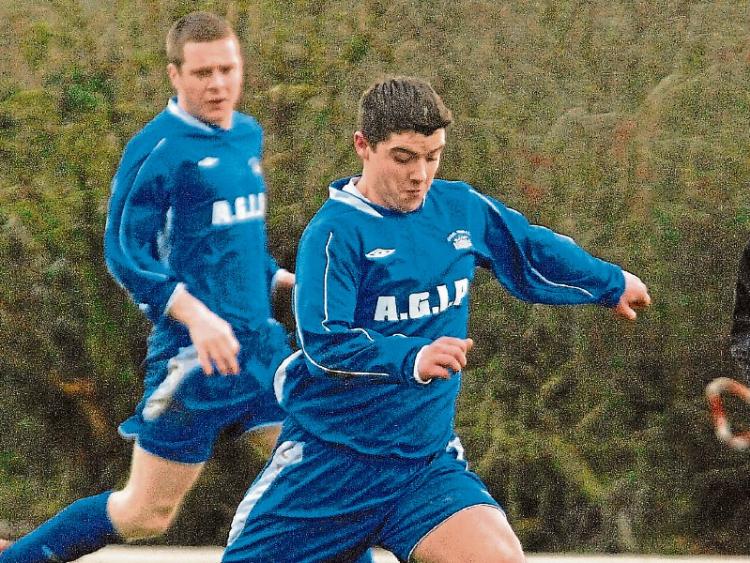 Mickey Coleman put in a solid performance for Cashel Town against Gorey Rangers.

Cashel Town’s fairytale run in this this season’s FAI Junior Cup came to an end on Sunday when they bowed out of the competition in Wexford by a four-goal deficit at the hands of a very strong and accomplished Gorey Rangers side.

The TSDL side needed to start the game well but did the complete opposite and went behind after just six minutes when Dylan Vickers struck home an unstoppable shot from 10 yards after some uncertainty in the visitors’ defence.

Things went from bad to worse two minutes later when a header from Vickers looped over the Cashel keeper after a cross from the right.

Cashel to their credit continued to grow into the game and started to create chances through Eoin Byrne and Alex O’Donovan, who hit the crossbar midway through the half. And they felt they were unlucky not to have been awarded a penalty five minutes before the break when they had a player felled in the Gorey area.

Still smarting from this decision, the Tipperary side were caught napping right on the stroke of half-time when Paul Brennan latched on to long ball and rounded the keeper and the half with a tap in.

With the game as good as over Cashel Town played a lot better in the second half but couldn’t manage to make the breakthrough. Eoin Byrne hit the crossbar from a free kick and was a thorn in the side of the hosts defence all day. Mikey Coleman was also excellent throughout and came close with a pile driver of a shot just after the hour mark.

Against the run of play though, Gorey Rangers were awarded a penalty in the 67th minute which Vickers stepped up and fired home to complete his hat trick.

Cashel Town plugged away and never gave up and continued to play football until the end, but they finished with thoughts of what might could have been as well as dreams if what may be to come for a side who can now concentrate on Munster and domestic success in what has already been a very good season for the club.