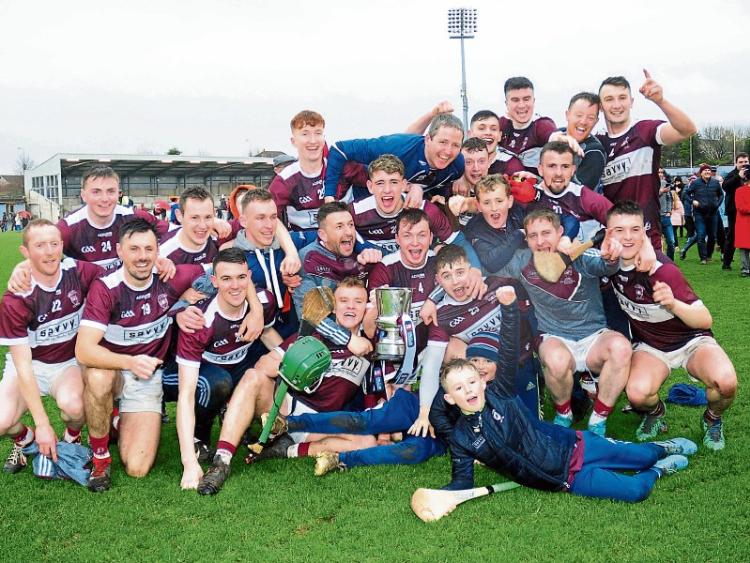 Borris-Ileigh players celebrate after the Munster final win over Ballygunner

The paucity of All-Ireland club winners represents a major blemish on Tipperary’s hurling record. Borris-Ileigh have a chance to address that situation on Sunday against Ballyhale Shamrocks. It’s an outside chance, if the betting odds are to be believed, though in their present mood the Tipp champs are up for any challenge.

This All-Ireland club series began with Roscrea beating St. Rynagh’s of Offaly in the inaugural event back in December 1971 – it was actually the 1970 competition. The game was played at Birr on December 19. Interestingly, after fifty years, the series is now heading back towards a calendar-year format, with this year’s January dates seen as a step in the readjustment from the St. Patrick’s Day finals.

That Roscrea team had just completed a three-in-a-row of Tipperary titles, ’68, ’69 and ’70, and key players like Tadhg O’Connor and Francis Loughnane played central roles in the county’s All-Ireland win of 1971.

When they won the club title it was another first for Tipperary but fifteen years would pass before another Tipperary club won (Kilruane MacDonaghs 1985/86) and the Premier record in this competition since then is anything but premier.

In fact we lag hopelessly behind several other counties, with Borris-Ileigh on Sunday seeking to bridge a gap that stretches back to their previous win in the competition in 1986/87.

In most honours lists Tipperary stands shoulder-to-shoulder with Kilkenny and Cork but in the club series we’re way down the pecking order. Galway leads the way with 13 titles, followed by Kilkenny on 12 and Cork on 9. Birr’s four titles puts Offaly ahead of Tipperary, where our paltry three wins belies our status as members of hurling’s holy trinity.

It’s an irksome detail for Tipperary followers and finding an explanation isn’t easy. Our championship structure will often be fingered as a cause but I’m not convinced. The cream comes to the top irrespective of the championship format and our cream, unfortunately, has tended to curdle too often outside the county.

The two clubs that established significant spells of dominance in Tipperary in the past thirty years or so – Toomevara and Thurles Sarsfields – failed to win a single All-Ireland. That’s a damning statistic and I’ve no doubt an item of major disappointment in both parishes.

Toomevara won 11 county titles between 1992 and 2008. They added 3 Munster crowns in that period but got to just one All- Ireland final where they were beaten by Sarsfields of Galway in 1994. Having a defender sent off was no help on the day.

In February 2007 Toome’ played Ballyhale in the semi-final at Portlaoise, where they were in a winning position but then had Tommy Dunne sent off and lost to the eventual champions by three points. Discipline proved costly once again.

For their part Sarsfields won 8 county titles between 2005 and 2017, yet managed just one Munster crown in 2012/13. In the All Ireland semi-final they played Killcormac/Killoughey at Portlaoise and lost by 6 points. St. Thomas’ won the final by just two points.

That should have been Thurles Sarsfields’ golden moment. Killcormac of Offaly had a decent side but they wouldn’t rate in the same category as a Ballyhale or a Portumna or a Birr in their time. There is a tide in the affairs of men etc. and this was Sarsfields’ opportunity and they blew it.

In stark contrast to both Toomevara and Thurles Sarsfields, Borris-Ileigh have come from nowhere to contest the 50th All-Ireland club hurling decider. Theirs is a meteoric rise, though they now face the greatest club of them all in the final.

Ballyhale Shamrocks top the list of winners with seven titles and this time they seek to put wins back-to-back for the first time. If they succeed they’ll join an elite band of five others - Birr, Portumna, Athenry, Sarsfields (Galway) and Cuala - who have done the back-to-back; nobody has done the hat-trick.

The Tipperary/Kilkenny aspect can only add spice to the event. Five months after the All- Ireland last August, Brendan Maher and Dan McCormack will again face off against  T.J. Reid, Colin Fennelly and Adrian Mullen in what will be a first-ever Tipp/Kilkenny club final.

Apart from Reid, Fennelly and Mullen there are several other familiar names on the Ballyhale side. Ex-Kilkenny seniors Joey Holden and Michael Fennelly man the spine of the defence, the latter hinting that this may be his last hurrah in the club colours. Others like Evan Shefflin, Brian Cody and Eoin Cody will need watching by Borris too.

The match-ups will be fascinating. Borris-Ileigh have tended to play off-the-cuff a bit with Brendan Maher and Dan McCormack swapping roles at times during games. Perhaps Brendan will this time go head-to-head with T.J. Reid, with Paddy Stapleton taking on the task of policing Colin Fennelly who was their key player against Slaughtneil in the semi-final. Either way players tend to alternate during the course of games so things might well be more fluid than that.

At the other end of the pitch Jerry Kelly’s tussle with Joey Holden should be interesting and Niall Kenny may stand beside Michael Fennelly, who struggled a bit in the semi-final.

Borris will need another top performance from Conor Kenny and I’m sure Henry Shefflin and company will be aware of the threat posed by JD on the inside line.

It all promises to be a fascinating set-to. Borris-Ileigh come to the final on a wave of momentum fostered through relentless workrate and team work, as well as skill. Once more they go in as underdogs, being listed at odds of 11/4 against 1/3 for the red hot favourites.

A cold analytical look at the sides would suggest that this is a bridge too far for Borris but the Tipp champs have been ignoring such pronouncements all season and let’s hope they do so again on Sunday.

On Wednesday last the crowds thronged to The Ragg for the clash of Thurles CBS and Our Lady’s Templemore in the quarter-final of the Harty Cup. Thurles went in as favourites but got stumped by a late late JD special.

It was an intriguing game more than a brilliant one. As Dean Ryan winners in ’18 and ’19 the CBS was seen as potential Harty champions, an impression reinforced by their smooth passage through their group. The school has been a magnet in recent times for aspiring hurlers and there was general optimism that they were well placed to add to their eight Harty wins, the last in 2015.

Our Lady’s Templemore, who last won in 2017, had other ideas. Buoyed by the presence of two members of the Borris-Ileigh senior side they led for most of the journey but in a tense period of injury time had to come from behind in dramatic fashion.

As a Tipperary derby game these lads knew each other, so the exchanges were tense and very even. Our Lady’s led by the minimum at half time (0-11 to 0-10) with some of their best scores coming from Eddie Ryan (Borris-Ileigh), Kenny Ryan (Toomevara), Ciaran McCormack (Loughmore) and James Corcoran (J.K. Brackens). James Devaney at this stage was restricted to three points from frees.

Thurles too had a decent spread of scorers, with Sarsfields’ Eoin Purcell hitting a few sweet ones and others coming from the Moycarkey pair at midfield, Max Hackett and Jack Morrissey as well as Jack Leamy (Golden) and Paddy Creedon (Sarsfields). Devon Ryan (Kickhams) hit two from frees in that half.

It remained a very tight affair in the second half, though for all that I thought the quality flagged a bit on a bumpy surface. Templemore retained the edge and you waited for the CBS to open up but it never really happened as they relied heavily on the free- taking of Devon Ryan to stay in touch.

Then came the most dramatic of finishes, as the referee played over six minutes of additional time. Thurles appeared to have struck with brilliant timing when they hit the front as the game ticked into additional time. A combination of Devon Ryan frees and one super point from full back Frankie Hanafin (Holycross) took them two-up and Templemore’s brave effort seemed to be falling just short.

But cometh the hour cometh the man.  JD Devaney had been subdued all day with Moycarkey’s Kevin Hayes doing a superb man-marking job, but in the third minute of injury-time the Borris lad for once slipped the cover and from the right corner fired in a match-winning goal.

Thurles did have chances to send the game to extra time but both a Devon Ryan free and a Jack Morrissey effort from play tailed wide, as Templemore claimed a famous win.

On balance I thought Templemore were the better side, more energetic, driving into the play whereas Thurles seemed to be waiting for things to happen. Borris-Ileigh’s corner forward Kevin Maher, playing at number six, was outstanding at the heart of a defence that overall did a great job of frustrating Thurles.  Eddie Ryan and Kenny Ryan looked smart too while JD had just one major input to the game – but what an input!

I felt sorry for Kevin Hayes on the CBS side who did such a great job of man-marking throughout but isn’t it a mark of class from JD that he could be shackled for over sixty minutes of hurling and still have the resolve to pounce for the winner deep into injury-time?

Devon Ryan will be frustrated at missing that late free for Thurles but ominously he was injured before taking it and in truth it was his frees that kept CBS in this game in the second half. Thurles will be disappointed that some of their bigger names didn’t click on a day when the absence of Kieran Costello through injury was no help.

Our Lady’s now face St. Flannan’s in the semi-final – a different game and a different challenge in a tough competition.