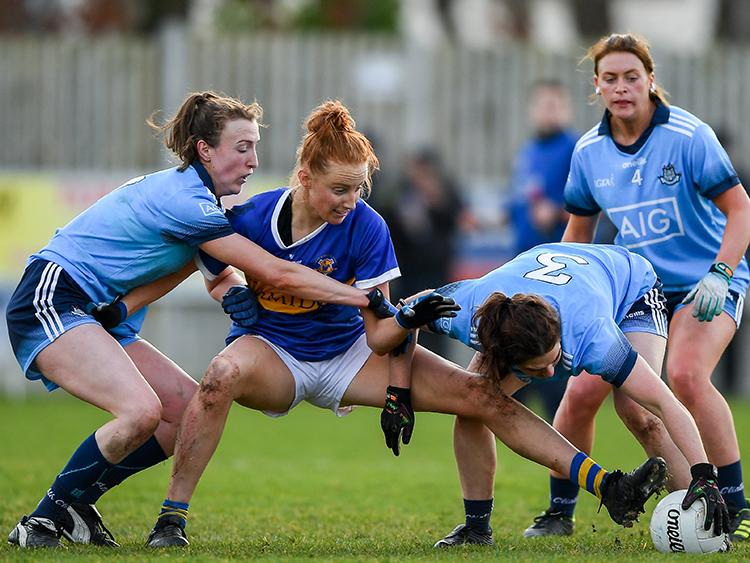 The outstanding Aishling Moloney kicked a point deep into stoppage-time to earn a heroic Tipperary team a share of the spoils with Dublin at the end of a tense Lidl National Ladies Football League division one clash at Ballyboden St Enda’s in Dublin on Sunday afternoon.

An All-Star nominee in 2019, Moloney was a thorn in the side of the All-Ireland champions’ defence throughout. Carla Rowe led by example for Mick Bohan’s charges and her impressive haul of 0-5 looked set to squeeze the 2018 champions over the line. However, Moloney displayed nerves of steel to curl a 65th minute effort between the posts which brought her final tally to 1-6 in the process.

Starting with just six of the team that defeated Galway in last September’s All-Ireland final, Dublin hit the ground running through Oonagh Whyte and Carla Rowe points - the latter coming from a close-range free.

The Tipperary line-up featured nine of the side which overcame Meath in last year’s All-Ireland intermediate decider, and although they took their time to settle, the Premier County exploded into life at the end of the opening quarter.

After converting an earlier free, Moloney brilliantly gathered a long delivery on the edge of the square and coolly fired beyond the reach of Sky Blues goalkeeper Ciara Trant.

This suddenly propelled Tipperary into the driving seat and with Dublin struggling to make headway in attack additional points, which arrived courtesy of Caitlin Kennedy and Moloney (two), gave Shane Ronayne's visitors a deserved 1-4 to 0-2 cushion at the break.

Dublin were much-improved on the resumption when Rowe and the returning Leah Caffrey posted unanswered scores for the hosts.

Though the ever-dangerous Moloney found the target from long-range, Tipperary lost captain Samantha Lambert to the sin-bin in the 38th minute. In her absence, Dublin registered three points without reply via the boot of Rowe (two) and Caffrey.

Moloney kicked a routine free in advance of Lambert's return, but the Dublin challenge gathered significant pace moving into the closing-quarter. Despite losing Lauren Magee to a yellow-card, the capital outfit looked set to prevail when Rowe (free), Kate Sullivan and the roaming Niamh Collins raised white flags in quick succession. That was until Moloney's dramatic intervention ensured both sides had to be content with a point apiece from this compelling encounter.