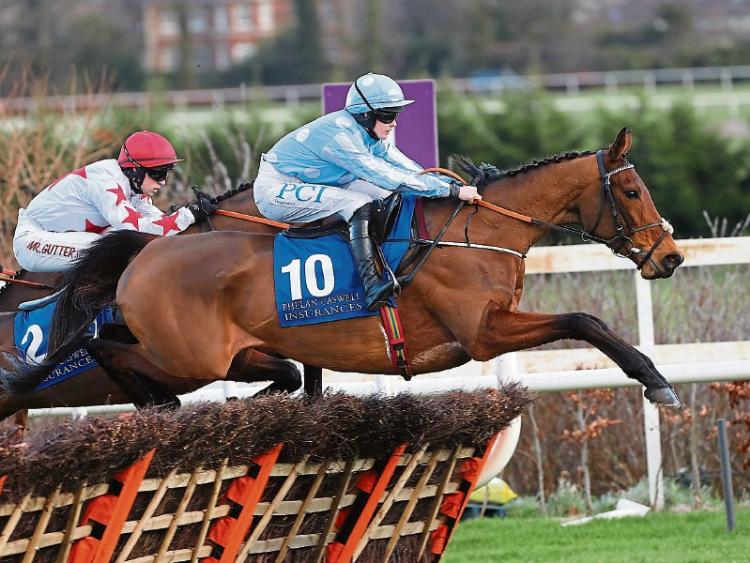 Leopardstown came alive on Saturday, in front of a crowd of 14,204, as wonder-mare Honeysuckle produced the performance of her career to take the PCI Irish Champion Hurdle on an afternoon her rider Rachael Blackmore described as "magic" as she lit up day one of the Dublin Racing Festival.

Blackmore and trainer Henry de Bromhead had already combined to take Grade 1 honours in the ERSG Arkle Novice Chase with Notebook, but a very special reception was reserved for Honeysuckle as she scored at odds of 8/11 favourite at the main expense of her own stable companion Petit Mouchoir and Gavin Cromwell's Darver Star.

The Grade 1 Ladbrokes Dublin Chase produced a brilliant winner and a one-two for Willie Mullins as Chacun Pour Soi stamped his class on proceedings. Paul Townend, who had to choose between the winner and Min, punched the air as the 6/5 favourite prevailed by three lengths and three parts of a length.

There were huge celebrations after the opener when hugely popular trainer Paul Nolan won his first Grade 1 contest since 2013 as Latest Exhibition landed a brilliant renewal of the Nathaniel Lacy & Partners Solicitors '€50,000 Cheltenham Bonus For Stable Staff' Novice Hurdle.

Ridden by Bryan Cooper, the 7/2 chance was comfortably on top of his rivals at the line, with Nolan now dreaming of Cheltenham glory with the gelding, who so nearly was sold out of the yard after winning his previous race at Navan.

Sean O'Keeffe was seen to great effect when getting Gordon Elliott off the mark for the festival, 8/1 chance Eclair De Beaufeu winning the Matheson Handicap Chase, the biggest win of the County Wexford conditional rider’s fledgling career.

There was an incredible finish to the Ladbrokes Hurdle, Charles Byrnes winning it for the third year running, with gambled-on 7/1 chance Thosedaysaregone pouncing under a remarkable Kevin Brouder ride, while the closing Goffs Future Stars INH Flat Race going to Willie Mullins’ Appreciate It, who looked a bit special, under the trainer’s son Patrick.

The second session of the Dublin Racing Festival, attended by 12,270, was highlighted by the remarkable Faugheen, which rolled back the years to take the Grade 1 Flogas Novice Chase. The loveable 12-year-old was out-jumped almost throughout by fellow market leader Battleoverdoyen, but he was always in touch and the crowd went wild as he took it up between the last two.

Paul Townend’s gallant partner had a battle on his hands from the last as his own stable companion Easy Game threw down a determined challenge but he was more than up to the task and scored by half a length with the crowd in raptures, and many of them showing a fair turn of foot of their own as they descended on the parade ring to welcome their hero home.

"Three runs put together now, it's fantastic. People say you should be retiring these old horses but if they have not too much mileage, they can still do it," said trainer Willie Mullins. "His will is incredible. Every morning he's out there on the gallop he wants to train. His attitude to racing is incredible."

The Paddy Power Irish Gold Cup produced an epic finish of its own as Gordon Elliott took the big race of the day with Jack Kennedy steering Delta Work to a hard-earned success. Another superb spectacle saw the three horses that dominated the market in Kemboy, Delta Work and Presenting Percy, jump it almost in unison. Kemboy and Paul Townend came up the rail and he had not fully asked for his effort, having jumped the second-last brilliantly.

Davy Russell had nursed Presenting Percy into contention, having been held up in rear, but Delta Work came there to lead at the last. Kemboy would not give in but Delta Work was always holding him all the way to the line.

"He settled lovely and jumped great. I was there in front for a while and he wasn't doing a whole lot up the straight," Kennedy said. "He has improved from the last day. To be honest I thought I got there too soon."

Henry de Bromhead and Rachael Blackmore's bid to make it a remarkable three Grade 1 victories at the Dublin Racing Festival running aground when the shortest-priced horse of the two days, Aspire Tower, fell at the last in the Tattersalls Ireland Spring Juvenile Hurdle. Aspire Tower fell under pressure at the last with A Wave Of The Sea coming through late on to win for Joseph O'Brien and Barry Geraghty.

The unbeaten Asterion Forlonge produced a devastating display in the Grade 1 Chanelle Pharma Novice Hurdle, winning for Willie Mullins and his nephew Danny.

May Remain landed his third race of Dundalk’s Winter Series with a gutsy success in the 5f handicap on Friday night. Ridden by Killenaule apprentice Gavin Ryan, the 8/1 chance battled well when challenged by Nigg Bay to win by half a length.