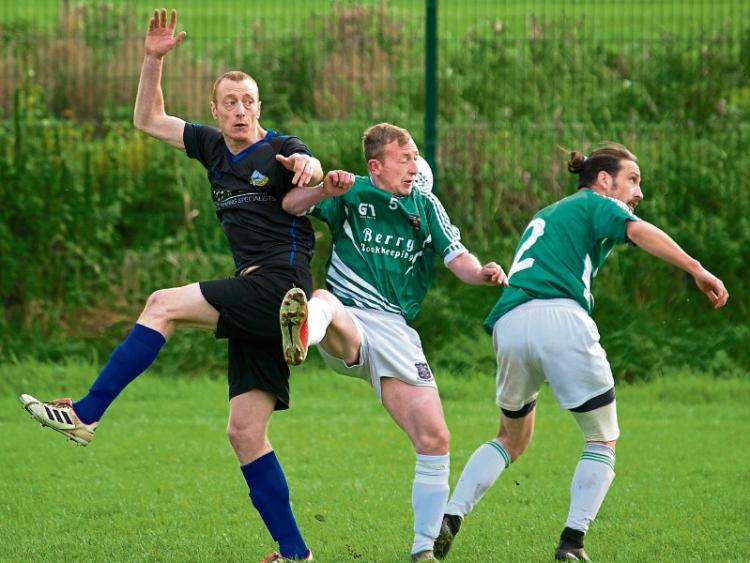 Mark Roche (pictured left) scored a hat-trick for Tipperary Town in their 5-0 demolition of Clonmel Town in the League Division 1 on Sunday last.

Tipperary Town produced an excellent performance on Sunday morning against fellow Division One strugglers Clonmel Town as the division heads towards the business end of the season.

The home side started better here and on seven minutes man of the match Mark Roche received a ball all of 35yards out before turning and slamming a shot to the net to put his side in front.

Good play shortly after from Jamie Malone and Mark Roche then played in Stephen Quinn but from a very tight angle the ball went to the wrong side of the post to the relief of the visitors.

But Clonmel then settled and had a period of dominance with Craig Guiry causing a few problems for a home defence that stayed solid not matter what was thrown at them. Two big chances came and went when Richie Crowe misfired and Guiry got it behind the defence but found the side netting.

And the hosts punished them when they extended the lead just before half time with Roche heading home a huge pass from Wayne Barry.

The second period followed a similar pattern to the first and the visitors missed some more chances before Cathal Ryan had a shot to extend the lead that was parried out into the path of Stephen Quinn and he had the easiest of tasks to tap home from six yards.

Shortly after Quinn again got in behind the defence but was taken down, and Mark Roche stepped up to claim a well deserved hat-trick.

The hosts added a fifth late on when Stephen Quinn played in substitute Jordan Cummins who drilled a great finish to the far corner.

Old Bridge continued in their winning ways with a victory over Thurles side Peake Villa by the odd goal in five at Green Lane on Sunday last.

The home side took early lead in the 10th minute from a Johnny Cagney header after Sean Maher had put an excellent delivery into the area. But Villa came right back into the game and dominated the next half hour or so. They deservedly equalised ten minutes from the break when a cross from the left sliced off Colm Breen and looped right over Liam Powell in the home goal.

The Bridge come back into in the last five minutes of the half and Aaron Arrigan almost restored the lead after a great run from deep, but his shot went narrowly wide.

The early part of the second period seen Bridge continue to make chances and they were rewarded when Aaron Arrigan and Chris O’Gorman combined really well for O’Gorman to fire a well taken shot into the corner of the net.

The game became scrappy as the heavy conditions took its toll on everyone, and Peake were reduced to ten men when Arrigan broke away after through ball and was fouled just outside the area as he was bearing in on goal.

Five minutes later the Bridge finally made it 3-1 from a quick corner and Cagney finished from six yards out.

The home side were seeing out the game until a last minute strike from 20 yards by Adam Garrett flew into the top corner and gave Peake Villa a lifeline, but the home side held on to take all three vital points

Slieveardagh United are struggling at the wrong end of Division One but they caused an upset at the other end of the table on Sunday when they upset the odds to beat the more fancied Wilderness Rovers side and put a serious dent in their title hopes.

This game saw the home side go two up inside 15 minutes, first through a fantastic effort in the eleventh minute when Ricky Cashin controlled a high ball on his chest and volleyed in from 25 yards past a stranded keeper. And the second came shortly after, when a clearance was charged down by Tommy O’Brien and rebounded into an empty net.

The away side dominated possession for the rest of the half but couldn’t find a goal back before the break. Wilderness started the second half very strongly pinning the home side in and creating several chances but failed to convert until 18 minutes from time through Niall Kelly after a failed clearance in the box fell at his feet and he swept a half volley home from ten tards out.

The last quarter of an hour was a nervy affair and although the away side lost a man to a  red card they still pushed for the equaliser that just eluded them in the end.