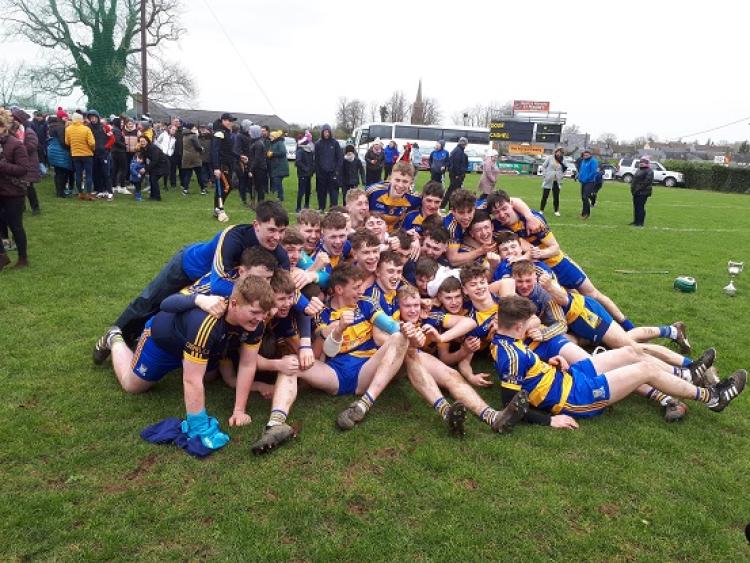 The Cashel CS team celebrates after the final whistle

A brave and resilient performance from fourteen man Cashel Community School at Bansha this afternoon earned them title of Munster senior hurling colleges B champions when they rallied late to defeat a fancied Doon side in a titanic and pulsating encounter.

In truth Cashel made most of the running in this game despite giving away a goal after only 40 seconds of action when Jack Armshaw got inside and gave his team a real shot in the arm as they played into the strong breeze. Cashel took time to settle after that but by the 10th minute they were back on terms and by the half way mark they held a 0-13 to 1-4 interval lead - full forward Conor O'Dwyer getting 0-9 for them. 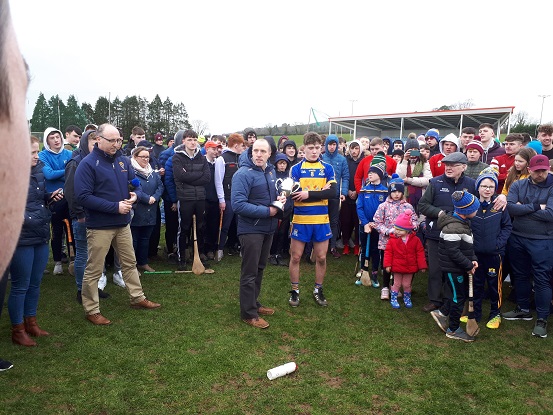 But, it would be a different battle for the Cashel lads in the second half as Doon, who had three Tipperary county minors in their ranks - Philip Gantley, Pakie Barry and Ger Ryan, would play with the aid of the very strong breeze which blew straight from one goal into the other.

Adam English was the main dangerman for Doon and he bagged 0-4 upon resumption to level the game again by the 20 minute mark. English, with a sublime sideline cut shoved Doon back in front and it looked as though they would take over and press on for the winning line. It looked even more so when Cashel had Daniel Moloney dismissed with a second yellow card in the 24th minute, but the numerical disadvantage only seemed to strengthen their resolve and they redoubled their efforts as the final whistle approached.

They were back on terms again when Stephen Browne pointed in the 26th minute; in front with a Conor O'Dwyer pointed free; and when Lorcan Carr bagged a brilliant goal in the 32nd minute after taking  a pass on the overlap from Ben Ryan, Cashel supporters were in seventh heaven.

Still though there was time for Doon to come back and the deficit was down to a goal thanks to an English 65, deep into injury time. Now they tried to conjure a leveling goal but Cashel put their bodies on the line and defended their rearguard to prevent any dramatic finale.

This was a super victory for Cashel and one which didn't look likely midway through the second half. Their resolve and positive attitude won the day - they simply refused to be runner-up again in this championship.

Doon, who had eight Tipperary starters in their ranks certainly rued not pressing on when they went in front. But, they were taken aback by Cashel's resolve and, try as they did, they were unable to create a goal scoring chance right at the death to snatch a draw.