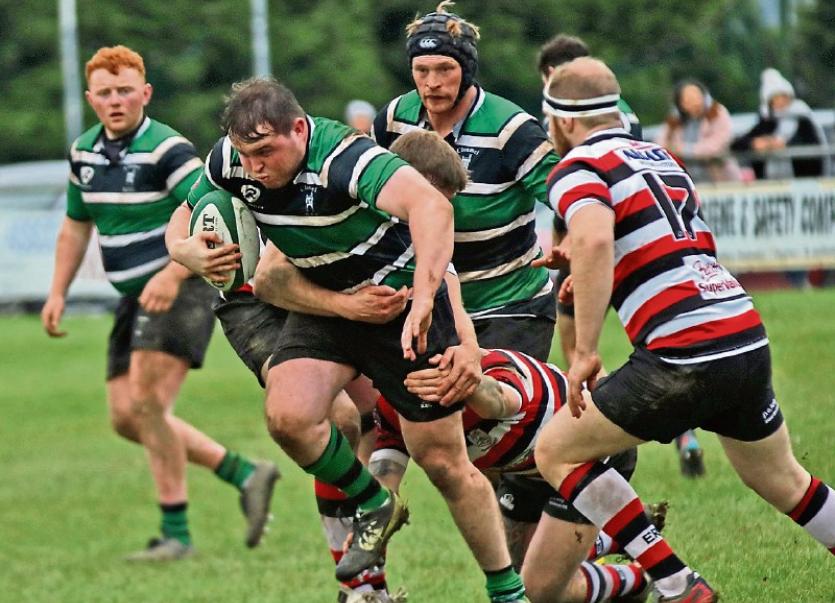 Niall Campions helped Clonmel to a magnificent away win against league leaders Enniscorthy in the AIL Division 2C on Saturday last.

After an extended break, Clonmel headed to Enniscorthy to take on the League Leaders. In what was a very blustery condition the large group of Clonmel supporters roared them onto the pitch Clonmel started off showing their intent with hit after hit and spent the first 10 minutes dominating the game, Enniscorthy got a breakaway and stormed down the field into our half where we conceded a penalty for Enniscorthy to go 3 up.

Clonmel came straight back at them and from some serious scrummaging Clonmel were awarded a penalty, and with conditions challenging up stepped Darren Cass to drive it over to make it 3-3. This was turning into a titanic battle with both sets of forwards going at each other, and the backs getting a few opportunities to test the line.

Clonmel were awarded a yellow card for a deliberate knock-on, (which could very easily of been an intercept with wide open space ahead).

Enniscorthy with the extra man started to show dominance in the lineout and through some great play by their whole team manged to get in for a converted try to take the lead.

Clonmel were not going to roll over, they threw everything at Enniscorthy and with great sustained forward pressure, Enniscorthy had a man sent to the bin, after numerous pick and go in their 22 our forwards pounded the line sucking in defenders and then whipped it out to the backs where Luke Hogan ran in to score a great team try which Dylan Cadogan slotted over the posts just before half time.

The second  half kicked off in similar vein with both teams knocking on the door and both defences standing tall. Clonmel dominated the scrums and Enniscorthy dominated the lineouts. Clonmel pounded away at the line and looked to be over for a try only to be held up. With our dominance in the scrum a much anticipated scrum to set us up and to the disbelief of the crowd the referee reversed his decision to let Enniscorthy off the hook.

More sustained pressure saw Enniscorthy have another player sent to the bin, Clonmel stepped it up a gear and some early great work by the backs set the forwards up to hammer away at the line, phase after phase saw Martin Altamirano crash over the whitewash for a well-earned try which Dylan Caodgan stuck over again to give Clonmel a 10-17 lead with the clock running down

Enniscorthy were not top of the league by chance and they came thundering back at us. Play after play from left to right they pounded our line with no sign of the line breaking. Clonmel were then shown a yellow card and Enniscorthy were relentless in attack. Clonmel held the line well throwing their bodies on the line to a man, with us well into injury time it looked like we had done enough, but Enniscorthy found a slight gap and they took their opportunity to get in for a try.

With all breaths held they stepped up for the kick which curved just wide of the post and Clonmel got a well-deserved hard-fought win, which sees them up to fourth in the table

Thanks to Enniscorthy for their hospitality. And a big shout out to the large number of supporters who travelled to shout on this team as they have done all season. The Club and team really appreciate it.

NEXT UP - CITY OF DERRY VISIT ARDGAOITHE

We welcome City of Derry to Clonmel next Saturday, February 29 at 2.30. Come along and show your support.